Swimming inspiration Natalie Du Toit will feature in the next instalment of Brand South Africa’s Play Your Part TV series, to be aired on Sunday 27 July at 9pm on SABC2. 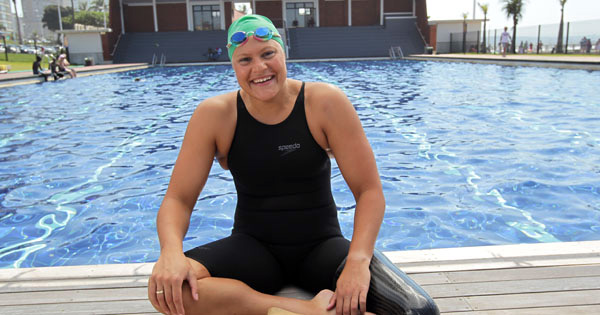 The Paralympics and Commonwealth Games gold-medallist swimmer is one of South Africa’s most inspiring athletes. Ranked amongst the fastest distance swimmers in the world, in 2008 Natalie Du Toit made history when she became the first amputee to qualify for the Summer Olympic Games.

Sleekly diving into an Olympic –sized pool, and emerging victorious from waters churned by her heroic swimming; this is how swim fans around the world remember Natalie Du Toit, as she freestyled and butterflied her way to the slew of gold medals she’s accumulated over her spectacular career.

The Paralympics and Commonwealth Games gold-medallist swimmer is one of South Africa’s most inspiring athletes. Ranked amongst the fastest distance swimmers in the world, in 2008 she made history when she became the first amputee to qualify for the Summer Olympic Games.

Her name is synonymous with courage, determination, overcoming adversity, and above all, being a phenomenal athlete.

Du Toit won over South Africans’ hearts when, at just 17 years old, and a rising star on the South African swimming scene, a scooter accident left her with her left leg amputated at the knee; undeterred, five months later, she was back in the pool. Her first workout exhausted her after 25 metres, but at least she was swimming again, more out of curiosity than determination. “I just wanted to see what would happen,” Du Toit said.

Her “never give up” approach led to her achieving her biggest dream – competing in the Olympic Games. She was one of only two Paralympians who competed in the 2008 Summer Olympics in Beijing, having qualified for the Games after finishing fourth in the 10km open-water race at the Open Water World Championships in Spain.

Du Toit went on to qualify for the finals of the 800m freestyle event at the 2002 Commonwealth Games. This marked the first time in recent history that an amputee raced in the finals of an international able-bodied swimming competition. At the end of the Games, Du Toit was presented with the first David Dixon Award for Outstanding Athlete of the Games. Consequently, she is the most successful South African Paralympian of all time, and an important figure in the history of sport.

Du Toit has successfully competed, and won gold, in the 2004, 2008 and 2012 Paralympic Games, and the 2006 and 2010 Commonwealth Games. In 2009, she received South Africa’s Order of Ikhamanga in Gold, honouring her exceptional achievements in swimming.

In March 2010, she became the second South African after Ernst van Dyk to be named the Laureus World Sportsperson of the Year with a Disability.

“It’s people like Natalie that provide the incentive for the youngsters to aspire to greatness”, said South African Sports Confederation and Olympic Committee president, Gideon Sam. “She fully deserves this acknowledgement.”

Later that year, she was the most outstanding athlete in the International Paralympic Committee’s Swimming World Championships in Eindhoven, The Netherlands. She won six gold medals, one silver and one bronze medal. Only three countries bettered her personal haul of six gold medals in women’s events.

Du Toit competed in the 2012 London Paralympic Games to score three gold medals and a silver, which took her tally to 13 gold medals across three Paralympic Games. These would be the last Olympic medals of her career, as she officially retired from professional swimming after her final race in the Games.

Even then, she emerged as the most successful South African athlete at the Games, winning gold medals in the 400m freestyle, 100m butterfly and 200m individual medley. She also added a silver medal in her last race, the 100m freestyle.

These days she is much in demand as a motivational public speaker, inspiring youngsters worldwide to reach for their dreams; “There’s really no line between able-bodied and disabled swimming … I treat both of them the same. They’re your opponents and you’ve got to race the way you train. It is important to swim your own race and not someone else’s.”