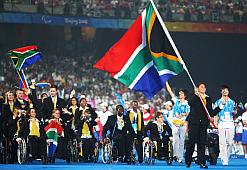 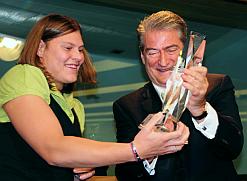 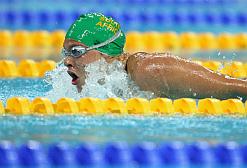 Du Toit’s courage and fierce competitive
spirit has taken her to the top.
(Image: Sascoc)

South African swimming champion Natalie du Toit, the only leg amputee ever to have qualified for both the Olympics and Paralympics, was honoured by the International Association for Human Values (IAHV) with their 2008 Youth Leadership award. The award pays tribute to young people who demonstrate an unsurpassed professional performance or outstanding qualities of social responsibility.

Du Toit had already made history several times before she dived into the water of Beijing’s Shunyi Rowing-Canoeing Park, the scene of the inaugural men’s and women’s Olympic 10km marathon swimming event. She is the first female leg amputee ever to qualify for the Olympic Games, according to Time magazine, who named her as one of its 100 athletes to watch during the 2008 summer games.

Her compatriot, controversial 400m amputee sprinter Oscar Pistorius, who runs with carbon-fibre prosthetic blades and goes by the fond nickname of Blade Runner, did not qualify for the Olympics. Pistorius was deemed eligible by the Court of Arbitration for Sport after the International Association of Athletics Federations barred him from competitions conducted under its rules, including the 2008 summer Olympics. Pistorius went on to win three gold medals at the Paralympics.

Du Toit was the only South African on Time’s list and while the team as a whole failed to live up to expectations, she was the pride of South Africans at home and abroad and the darling of the international press. Polish table tennis player Natalia Partyka was the first arm amputee to compete at Beijing 2008.

Vote for Natalie du Toit as the international female open water swimmer of the year. The winners will be selected on 1 January 2009. At the time of writing du Toit was joint third in the poll, but with 41 days left to vote South Africans can change her ranking!

Du Toit was honoured by the IAHV because of her unquenchable spirit, said board member Christoph Glaser. “We admire the fact that she has become a source of inspiration to the youth of her country,” he added.

The IAHV is a UK-chartered charity that works solely for the development and promotion of human values. Founded in Geneva in 1997, the IAHV operates around the world, including South Africa. The organisation gives its Human Values awards to those whom it believes to have upheld core human principles through their dedication, commitment and hard work. Former South African President Nelson Mandela is a previous recipient.

The award was bestowed on du Toit at the European Parliament in Brussels during the World Youth Forum, part of the Ethics in Business – Corporate Culture and Spirituality Conference. The annual event brings together a diverse mix of politicians, academics, and business and spiritual leaders from many countries to discuss ongoing implementation of an ethics-based approach to deal with the challenges in today’s global markets.

Du Toit was also a guest speaker at the conference. “It is a real honour to be representing South Africa and to receive this award, especially at this prestigious event which includes such esteemed delegates,” she said.

Just a month earlier du Toit visited the Nelson Mandela Foundation in Johannesburg at the request of Nelson Mandela, who was on hand to personally congratulate the Beijing Olympic and Paralympic medallists.

Natalie du Toit earned her Olympic berth in May 2008, when she came fourth in her event at the open water world championships in Seville, Spain. “To be here is a dream come true,” she said later in Beijing. “A dream is something that you set for yourself, not what other people set for you. When I qualified in Seville I burst into tears. I couldn’t believe that I was going to the Olympic Games.”

Later at the Olympics, while she came in 16th out of 25 competitors, a mere 82 seconds behind the winner, du Toit won the hearts of viewers and around the world with her courage and determination. She went on to take five gold medals and a silver at the Paralympic Games, where South Africa’s athletes excelled, bringing home 30 medals including 21 gold.

After the race du Toit’s erstwhile rivals praised her achievement. “I was swimming next to her and she beat me – and she has one leg,” said 16-year-old American Chloe Sutton before breaking down in tears. “It’s incredible she was able to do that.”

Winner Larisa Ilchenko of Russia echoed the American’s sentiments. “I have enormous respect for her. It is exceedingly hard. Just looking at these people inspires you,” she said, speaking through a translator.

Not surprisingly du Toit has become a popular motivational speaker in South Africa, and makes time to appear at companies, schools, churches, and other social groups, as long as it does not interfere with her training. “I’d like to be a role model for everyone who has problems to get up and fight,” she said.

Her speaking career took off after a scooter accident in 2001 and the subsequent amputation of her left leg at the knee, which temporarily halted her promising swimming career.

Remarkably, she was back in the pool before she had even recovered enough to walk steadily again, and in the next few years made a name for herself at swimming events around the world, as well as two Commonwealth Games and the 2004 Paralympic Games. Already a record breaker, she was the first disabled athlete to qualify for the final of an international able-bodied swimming event – this was at the 2002 Commonwealth Games.

The Olympics was an ambition she had nurtured since the age of six, and not only did she achieve her life-long dream in 2008 but she carried the South African flag into the National Stadium during the opening ceremony on the night of 8 August. Two months later she again led Team South Africa into the arena for the Paralympic Games.

At the close of the Beijing Paralympics, du Toit was named the winner of the Whang Youn Dai Achievement Award. The award is named after South Korean Dr Whang Youn Dai, who became that country’s first disabled female physician, and instituted the award at the 1988 Paralympics in Seoul. South Africa’s Zanele Situ, champion wheelchair javelin thrower, was the female recipient after the 2004 Paralympics in Athens.

Du Toit, Pistorius and Situ have all been honoured at home with a Presidential National Order, the highest award that South Africa can bestow on its citizens, or distinguished foreigners.