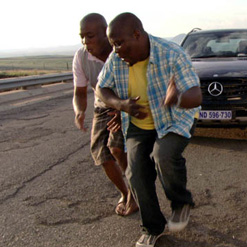 Get me to the church on time. A still from
South Africa’s hit movie White Wedding. 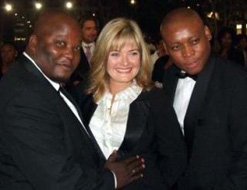 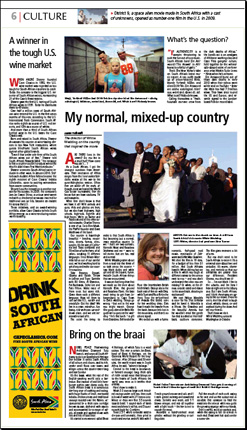 This article originally appeared on page
six of South Africa Now, a six-page
supplement to the Washington Post
produced on behalf of Brand South Africa.
(Click to enlarge.)

South African hit movie White Wedding is now showing in the US to rave reviews. Jann Turner, who directed and jointly wrote and produced the film, writes about the place that inspired it – South Africa.

Are there lions in the streets? Do you live in a mud hut? How come you ain’t … ?

As a South African, I get the strangest questions from Americans. Their impression of Africa ranges from the lions-snakes-loincloths version, all the way to the guns-Aids-ghettos version. Often they are wildly off the mark, although, since we hosted the World Cup soccer tournament, they do know that we have stadiums, TV and vuvuzelas.

What they don’t know is that we have it all! Wild animals and guns, Aids and ghettos are here, but we also have highways, high schools, high-tech, high-life and high hopes. We’re on Twitter and Facebook and all the other social networks. Charlize Theron is one of us. So is Elon Musk, the PayPal founder and Dave Matthews of the band. We invented super-glue, open-heart surgery and short-range tactical nuclear weapons and we were also the first to ever give up the latter voluntarily.

Our country is hauntingly beautiful – beaches, mountains, deserts, forests, cities, jungles. It’s the size of California and Texas combined and 50-million of us live here, of all colours, speaking 11 different languages. Since Nelson Mandela led us out of our painful past, we’re all working hard to get along and make our country a success. And slowly, we’re getting it right. Most of us even have rhythm now.

Take Beyonce, Denzel, Obama and Oprah. Throw in LeBron and Tiger. Sprinkle with Bill Gates, Al Sharpton, Pat Buchanan, Spike Lee and Paris Hilton. Make most of them poor, but some rich. Given them each a different language. Now tell them to sort out the US, quickly and peacefully. Get the idea? Ask anyone who visited us for the World Cup. We live in a crazy, mixed-up, fun loving, rich-and-poor, up-and-down place, and we are immensely proud of it.

The point I’m trying to make is that South Africa is fast becoming just a normal, crazy mixed-up country. So we – that’s my two partners, Kenneth Nkosi and Rapulana Seiphemo and me – want to tell stories that are fun, real, and normal.

So White Wedding came about from a road trip the three of us took across the country about seven years ago – two black dudes and white girl and all the bizarre, funny, typically South African things that we encountered.

It was on that long drive that we made up the story about Kenneth (Elvis, the groom) and Rapulana (Tumi, the best man) trying to get from Johannesburg to Cape Town to Elvis’s wedding. Things go wrong – but not in the way you might expect. George (the goat), played by Bella (the goat) isn’t a guest at the wedding – he’s the lunch – a gift from Grandma. Befriended by Rose (the heartbroken British hitch-hiker), George sits in the back seat of the car with Elvis, while Tumi and Rose flirt in the front. Tony, the ex-boyfriend of Ayanda (the bride), pays for her wedding dress. Elvis hasn’t made the transfer from the bank, because he’s lost in mountains, and there’s no phone signal. It’s not really George’s fault that they crash, but in the end, poor George ends up getting cooked and eaten. Or does he?

We ended up with a funny, romantic, feel-good road-movie, reminiscent of Sideways and Little Miss Sunshine. We shot the film in 18 days, for a budget of less than U$1-million (R7-million). And South Africans loved it. When did you last see a film in which you laugh at different scenes to the person next to you – and you don’t understand the jokes you are missing? Or when, at the climax, people stand and dance to the soundtrack, shouting in excitement? We heard many stories of black and white strangers hugging each other as the credits rolled, or of employers and their housekeepers sitting side-by-side, shedding simultaneous tears when the story gets weepy.

We sent Nelson Mandela a copy for his 91st birthday and he loved it. Mandela is a Xhosa, like Grandma and the beautiful Ayanda, but he wouldn’t mind the gentle fun that is poked at their laid-back, stubborn stereotype. The film gives everyone a bit of a rev.

But you don’t need to be South African to appreciate it. At heart, it’s a universal story about love and prejudice. It’s warm, charming, and reminds us that our similarities are greater than our differences. President Obama, you should see it!

So … I’m not black. I live in the suburbs, and the lions I hear at night are in the Joburg zoo. But I am South African, and I think Americans are going to like our movie. If you do see it, don’t be afraid to laugh aloud, whistle, dance, cry and applaud during the show. And tell your friends.

That’s how we do it.