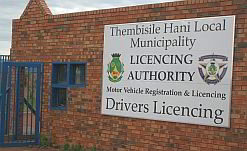 The government has identified the need
to transform municipalities.
(Image: Bongani Nkosi) 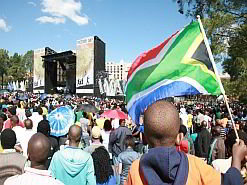 Scores turned out to celebrate their
country’s Freedom Day on 27 April.
(Image: BuaNews)

Work on ensuring that all South African municipalities deliver better services will begin in earnest after the upcoming local government elections, President Jacob Zuma said in his Freedom Day speech on 27 April 2011.

Zuma pointed out that while the government has maintained a standard of service delivery from a national and provincial viewpoint, its performance at municipal level still lags behind.

“We have indeed done well in transforming governance in the national and provincial spheres,” he said. “However, our research has indicated that we have to do a lot more to improve the way local government works.”

Issues identified in the local government turnaround strategy adopted by Cabinet in November 2009 will be attended to after the elections, Zuma said.

The turnaround strategy states that the “government wants to turn around municipalities from struggling with failure to ones that are confident in their abilities to execute their service delivery mandates”.

South Africa’s 283 municipalities have a specific role of delivering basic services such as water, sanitation and refuse removal to communities, but many are found wanting.

Rural areas and informal settlements remain the most affected by poor delivery of basic services rather than townships and towns.

Community protests against municipalities’ poor performance are on the rise in the country.

A number of municipalities have been placed under administration in recent years for poor performance.

The uMsunduzi municipality in KwaZulu-Natal is the latest to be placed under administration, a process which sees the mayor and municipal manager being stripped of their executive powers and a team of financial experts appointed. This is done when a municipality is on the verge of financial collapse or has already collapsed.

Poor administration and financial management in municipalities are some of the problems that the government has to address.

Zuma noted that employing knowledgeable officials is key to helping municipalities, some of which are clearly in distress. “We have to ensure the appointment of qualified and experienced personnel…”

He pointed out that the government must ensure “the transparency of tender and procurement systems and also improve the levels of financial management and accountability”.

“Together we must fix local government and make it work better.”

Political parties ruling municipalities are often accused of appointing officials based on their connections – a form of nepotism which hampers effective service delivery.

“The blurring of the lines between the political and administrative aspects of governance has tended to affect service delivery in the outgoing municipal administrations,” the president said.

There’s a need for finding ways to better manage the relations between councillors and municipal officials, he added.

An opportunity to elect local representatives

Zuma’s reflection of the status quo of municipalities comes at the time when campaigns for the local government elections are gaining momentum. Political parties are criss-crossing the country, lobbying communities to vote in their candidates as councillors.

South Africans will go to polls in less than three weeks from now – and the entire voting population has been urged to participate to ensure successful governance.

“We urge all South Africans to come out in great numbers to vote in the local government elections.”

South Africa marked 17 years of democracy on 27 April. The country has achieved significant milestones in this period, Zuma said.

“Indeed we have done well as a country in only 17 years of freedom, but we know that many more South Africans still need water, electricity, sanitation, jobs and other basic necessities.”

Among the government’s successes, Zuma mentioned the provision of electricity to 84% of households compared to 36% in 1994. About 62% of homes had access to clean drinking water in 1994, but in 2011 at least 93% do, according to the president.