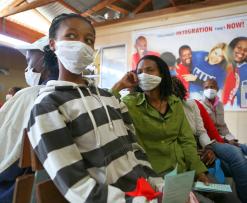 The results show a decrease in deaths among males and females as well as a steady decline in the most common cause of natural death, tuberculosis (TB). The statistics apply to 2009.

The publication, titled Mortality and causes of death in South Africa: Findings from death notifications, has been released annually since 2004.

The latest analysis looks at trends in mortality from 2007 to 2009 as well as selected characteristics such as demographics and social circumstances specifically related to 2009.

The decline in TB deaths in particular is significant as it is the most common opportunistic infection to affect and kill HIV. The disease is known to actively accelerate the progression of HIV into Aids.

In addition, in recent years TB has evolved into a drug resistant strain with a much higher mortality potential.

“Tuberculosis continued to be the most commonly mentioned cause of death on death notification forms, as well as the leading underlying natural cause of death in the country. However, the number of TB deaths has decreased since 2007,” notes the report.

As a result HIV is rated only seventh and accounts for only 3.1% out of over 572 000 deaths for the year, despite South Africa’s infection rates being among the highest in the world.

It is estimated that about 5.38-million people in a population of some 50.59-million are living with the disease, as indicated in the Stats SA mid-year population estimates for 2011.

Influenza and pneumonia were the second most common cause of death, followed by intestinal infectious diseases. The latter is also the main cause of death among children aged under 15 and younger.

In the category for non-natural deaths, the 15 to 19 age group is most at risk from accidental or homicidal deaths, while males are also more likely than females to die of unnatural causes in general, among all age groups.

The Western Cape received the dubious honour of being the province where the highest proportion of non-natural deaths occurred.

Not surprisingly, life expectancy is slowly on the increase. The 2011 mid-year population estimate compares favourably with that for 2010, and shows that life expectancy among males, females and infants are rising, albeit slowly among some groups.

The estimated life expectancy at birth is now 54.9 years for males and 59.1 years for females, with males gaining more than one year and females four years in expectancy since 2010.

Calling the shots on TB

The drop in mortality rates and increased life expectancy aside, TB remains the bane of the South African health scene, although it’s a treatable and curable disease. Since 1997 it has been the leading cause of death in the country.

According to the Department of Health‘s Policy Framework on Multi-Drug Resistant TB (PDF, 1.3MB), South Africa ranks third among the high-burden countries that contribute to 80% of the world TB burden, only lagging behind much the larger nations of India and China.

The two biggest problems for health workers are the heavy caseloads related to TB and HIV, and the high number of defaulters in relation to TB medication.

Where gains are made, as the health department has recorded in the past, this is significantly reduced by patients who, for various reasons, stop using the medication before full recovery.

This not only results in a drop in success rates for cured patients, but takes the disease back into an already vulnerable environment and increases the potential for drug resistance.

The proportion of people with TB who were co-infected with HIV at that time was estimated to be around 55%.

Testing for TB now much quicker

At least one stumbling block is slowly being eradicated. TB testing in itself is a lengthy process which can take anything from three to six weeks – but in March 2011, Minister of Health Dr Aaron Motsoaledi unveiled the first of several new GeneXpert TB testing machines at the Prince Mshiyeni Hospital in Durban.

The eThekwini district was chosen for the first roll-out as it has the highest TB infection rate in the country. The health department will gradually introduce the machine at key state hospitals around South Africa.