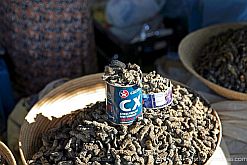 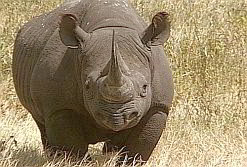 The Kruger National Park is home to  the
black rhino, which is distinguished from
the white rhino by its pointy upper lip.
(Image: Goallover.org)

The Kruger National Park is allowing locals in the area to harvest mopane worms during the festive season as part of a poverty and hunger alleviation pilot project. Mopane worms are a local delicacy in the northern region of South Africa.

The locals of the Nxanatseni region of the park between Punda Maria and Phalaborwa in Limpopo have been given permits to harvest the worms between 15 December and 28 December 2010, for their own consumption.

Situated in the east of the country, the Kruger Park is part of the portfolio of South African National Parks (Sanparks), which manages a system of parks representing South Africa’s indigenous fauna, flora, landscapes and associated cultural heritage.

The pilot project will be monitored closely to assess its impact and prevent over-harvesting.

William Mabasa, the Kruger’s head of public relations and communications, said: “With high unemployment levels in the rural communities outside the park around the harvesting area, we want to contribute positively towards the wellbeing and livelihoods of families, especially during Christmas time.”

Mabasa said that many people in Limpopo province and elsewhere in the country eat mopane worms, as they’re an important source of protein.

“Scientists will monitor the ecological, social and economic impact of the harvesting process before, during and after the project has taken place to ensure that it does not negatively affect the ecosystem,” he added.

Rangers from the park will escort the 60 selected harvesters to the harvest area and guard them throughout the project.

Mabasa said, “The harvesters will be divided into six groups of 10 people each, with each group being accompanied to the harvesting zone by a ranger and guide who will protect them against attacks from animals.”

Sanparks is associated with tourism and recreation, spiritual experiences, employment and business opportunities. The mopane worm harvesting project is meant to extend these benefits to include sustainable utilisation of natural resources – one of the parks authority’s key policies.

Insects form part of people’s diets throughout the world and in South Africa, the mopane worm (Imbrassia belina) is a delicacy amongst many people in the northern region of the country.

The worms are known as mashonzha, masonja or amasonja among the locals and form part of a multi-million rand trade in edible insects, providing a livelihood for many harvesters, traders and their families.

Although they usually feed on the mopane tree, their diet can include leaves of many other indigenous trees. This gives the worms a wider range than just the regions where mopane trees grow. Besides humans, the worms and eggs are vulnerable to disease and consumption by birds.

Traditionally the worms were harvested for subsistence but harvesting has become more commercially driven. Because people want to cash in on the lucrative mopane worm business, over-harvesting in one season can lead to a smaller harvest in the next.

Mopane worms are preserved by drying in the sun or smoking to add more flavour. They are eaten in the dried state or may be soaked until rehydrated, before being fried to a crunchy texture.

The park was established in 1898, initially to control hunting and protect the diminishing number of animals, and is the largest game reserve in South Africa. Covering almost 19 000 square kilometres, it’s comparable in size to the entire country of Wales.

The Kruger is now a part of the 35 000 square kilometre Great Limpopo Transfrontier Park, a peace park with no internal borders that joins the Kruger to Zimbabwe’s Gonarezhou National Park and the Limpopo National Park in Mozambique.

Although wildlife is its drawcard, its boundaries also encompass over 255 historical and cultural sites, with more yet to be explored.