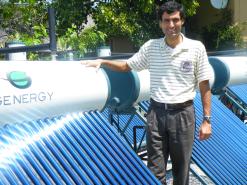 Joaquin Valverde, owner of Valverde
Country Hotel, has installed a mini
solar farm, the first of its kind in
the Gauteng. 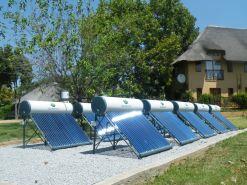 The new solar facility has the capacity to
supply 2 500 litres of hot water to 18
guest rooms and two kitchens.
(Images: Wilma den Hartigh)

When Joaquin Valverde bought Valverde Country Hotel in Muldersdrift, west of Johannesburg in Gauteng, about nine years ago, he had a vision to transform what was an abandoned building into a thriving business.

But Valverde didn’t want to do it the conventional way – he wanted an eco-conscious business with a low carbon footprint.

Instead of just paying lip service to going green, he’s introduced various greening initiatives at Valverde over the years. The most recent introduction is a mini solar farm, the first of its kind in the province.

“We are embracing the trend to go green, which seems quite apt considering that Valverde means ‘green valley’ in Spanish and Italian,” Valverde says. “We believe that it is time for businesses to take environmental responsibility seriously.”

Finding a concept that works

Installing solar power technology at the hotel was a lengthy process and the final product is the result of many months of design, approvals and testing.

Regardt Botha from RHB Consulting, a small engineering consulting company responsible for the design of Valverde’s solar facility, says that an initial proof of concept phase was completed in May last year. This involved levelling the ground and installing the ring feed piping, pumps and the first set of geysers.

After about six months of testing the system over the coldest part of winter, the second phase was completed at the end of last year.

Botha explains that the hotel’s solar power project had a few challenges. Usually, solar collectors are mounted on the roof of a building where the most sunlight can be captured.

However, this was not possible at Valverde as all the buildings have thatched roofs, which could result in rotting of the thatch if the hot water leaked out.

The positioning was also important as the collector panels had to face north and be installed away from buildings to prevent shadows on the panels.

The solution to Valverde’s challenges was a centralised hot water plant and a ring feed to circulate it throughout the facility.

Instead of hiding the geysers and panels, the mini solar farm was installed right next to the hotel’s swimming pool. “We decided to make a feature of it,” Valverde says.

This particular system, made from high quality materials to capture the maximum sunlight, is one of the most accessible types of solar technology for businesses and residential homes. It’s affordable, requires little maintenance and is relatively easy to install.

If the water gets too hot, it is mixed down using a tempering valve to between 55 and 60 degrees Celsius to prevent scalding.

Botha says one of the criticisms of this solar system is that the water does get very hot, but he argues that this is actually a benefit. The system’s highly effective sun energy storage capacity means that even with two consecutive rainy days, a situation not unheard of in the area, there will still be enough hot water to go around.

The two-phase heating technology of the facility consists of two rows of five geysers, each connected to a solar panel. The first row of pre-heating geysers feeds into the second row of main supply geysers, which ensures that the hotel always has a supply of hot water ready to use.

The dual glass vacuum tubes made from toughened glass are one of the unique features of this system, and work just like a conventional thermos flask keeps beverages hot.

The thermal insulation mechanism doesn’t allow heat to escape easily, keeping liquids warmer for longer than in a typical container.

When the tubes absorb solar energy, the sun penetrates the outer tube, heat is absorbed by the inner tube and the vacuum between the two retains the heat.

“Because the tubes are round, they are less sensitive to the sun’s orientation and can absorb a greater amount of heat,” explains Valverde. “A specially formulated coating allows the tubes to absorb maximum heat without radiating it out again.”

Besides reducing energy consumption, cutting back on the amount of water used by the facility is another top priority for Valverde.

So he’s installed a grey water recycling plant that works with a bio-filter to clean water using bacteria and natural filters.

All wastewater runs through a natural filtering system, and is collected in two dams.

“In doing this we are able to reduce our overall water consumption by using the water for irrigation,” he explains.

Indigenous fish species such as tilapia and barbel have been introduced to the dam, which helps to maintain a healthy ecosystem by attracting local birds, frogs, ducks and even the occasional fish eagle.

The hotel owner has also invested in other water-saving devices such as low-flow showerheads.

“We buy all our lettuce, herbs and some vegetables from a local farmer who produces everything organically,” he says.

All organic food waste is disposed of in the hotel’s worm farm and the compost that results is used to cultivate the gardens and the vegetable patch on the property.

Valverde recently became a member of the Event Greening Forum, an initiative that promotes sustainable and ethical business practices within the events industry in South Africa.

“If you look at our picturesque surroundings it’s easy to understand what inspires us to preserve our natural heritage,” he says.