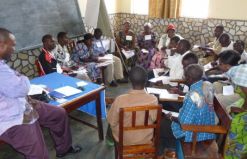 Integrating mental health care into existing primary health care systems will make it possible for more people to access the treatment they need. There are also other ways to deliver affordable mental wellness services that don’t necessarily require medical intervention, such as counselling through trained community workers.
(Image: www.healthnettpo.org) 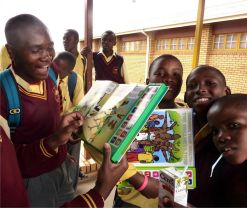 The South African Depression and Anxiety Group produce educational materials such as speaking books. Each book speaks to people in their own language, often through the voice of a local celebrity, providing important information about topics such as suicide, depression, hygiene and how to say no to drugs.
(Image: www.speakingbooks.com)

The University of Cape Town’s (UCT) Alan J Flisher Centre for Public Mental Health is part of an international consortium of scientists that is to receive a multi-million rand grant to develop ways to improve treatment for mental health disorders such as depression, anxiety and substance abuse disorders in low-and middle-income countries (LMICs).

One suggestion is to integrate mental health care into existing primary health care systems, making it possible for more people to access the treatment they need. However, an important first step towards this goal is for governments to develop the political will, and make more financial resources available for mental health care.

The research forms part of the Emerald project, a global mental health initiative to improve emerging mental health systems in LMICs, such as adequate and sustainable resourcing and integrating the provision of physical and mental health.

The R60-million (US$7.1-million) grant, awarded by the United Nations 7th Framework Programme for research, will be used to assess health systems for mental health care in Ethiopia, India, Nepal, Nigeria, South Africa and Uganda over the next five years.

These countries are members of the international consortium, led by the King’s College London’s Institute of Psychiatry together with partner institutions in each country, the University of Madrid and the World Health Organisation.

Solutions for the treatment gap

Professor Crick Lund, director of the Centre for Public Mental Health at UCT, argues that there is a great need to integrate mental wellness and primary healthcare. He adds that approximately 75% of people living with a diagnosable mental health problem in LMICs do not get the care they need.

One of the main goals of the consortium’s research is to address the treatment gap that exists in LMICs by ensuring that mental health services are provided within the primary health care system.

“We are calling for the inclusion of mental health treatment in social health insurance packages such as National Health Insurance,” Lund says.

He says there are also other ways to deliver affordable mental wellness services that don’t necessarily require medical intervention, such as counselling through trained community workers.

“These are inexpensive forms of mental health provision,” he says.

“In such countries as few as 2% of people with mental illness receive any treatment, Emerald will accelerate progress to close this mental health gap,” Thornicroft said at the launch of the Emerald project.

The health systems of LMICs are particularly strained due to the lower availability of resources and higher overall burden of disease in these populations, compared to high-income countries.

Many LMICs have to deal with a ‘double burden’ of disease. Levels of mortality due to communicable, maternal, perinatal and nutritional conditions are high, while there are also increasing rates of chronic non-communicable diseases such as cardiovascular disease, cancer, diabetes and mental disorders.

According to the Programme for Improving Mental Health Care (Prime), a project of the UCT Centre for Public Mental Health, more than 13% of the global burden of disease is due to mental illness, which includes neurological and substance abuse disorders.

“By the year 2030, depression will be the second most disabling health condition in the world.”

With access to more funding, the consortium can highlight the need for improved treatment of mental illness, particularly for poor and vulnerable communities who have little or no access to such facilities.

New findings from a research study show that it costs South Africa more to not treat mental illness than to treat it.

The research, undertaken by Lund and his colleagues at UCT, suggest that there is a strong economic argument for preventing mental illness and scaling up mental health care and rehabilitation services to alleviate the economic burden of these diseases.

People living with mental illness lose substantial income due to the disability and stigma they face.

Lund’s research showed that the total annual cost in lost earnings for South Africans with mental disorders was about R30-billion (US$3.6-billion). In contrast, government’s projected total annual expenditure on mental health services is around R500-million ($59.3-million).

The researchers expect the cost of lost earnings due to mental illness to be even higher as their analysis excluded child and adolescent mental disorders, and other severe chronic mental disorders such as schizophrenia and bipolar mood disorder.

This has important implications for public health policymakers in LMICs, as it reveals that government’s investment in mental health care for the public can translate into economic benefits, and reduce the societal costs of mental illness.

Lund says poverty is a major driver of mental health problems. In an article co-authored by Lund, Poverty and mental disorders: breaking the cycle in low-income and middle-income countries, published in The Lancet, Lund says it is critical to improve mental health care, not only as a public health and human rights priority, but also as a development priority.

“People who live in poor conditions are at greater risk,” Lund says. Socio-economic factors such as job security, housing, employment, food insecurity and financial stress all contribute to a person’s mental wellbeing.

Through the programme, the consortium also wants to encourage people to manage their lifestyles, and prioritise both mental and physical health. Hopefully, future interventions will also alleviate mistrust in psychology and psychiatry.

“Someone who is HIV positive and on antiretroviral medication is more likely to stop taking medication if they are depressed,” he says. Trials have indicated that treating depression with medication such as anti-depressants will improve a person’s willingness to take their medication, and it will boost their CD4 count.

It is well documented that mental illness carries a stigma in cultures around the world.

“There are varying explanations as to why these conditions exist, and they are all culture specific reasons,” he says.

According to a research paper co-authored by Lund, Mental Health Stigma: What is being done to raise awareness and reduce stigma in South Africa? published in the African Journal of Psychiatry, stigma plays a major role in the persistent suffering, disability and economic loss associated with mental illnesses.

The paper points out that the absence of supportive family and friends, the loss of employment and a lack of access to mental health services can worsen a person’s mental illness. It can also place these individuals at increased risk of substance abuse and criminal activities.

Although more can be done to promote a better understanding of mental illness, a number of innovative strategies have been developed to address stigma and improve awareness about mental health in South Africa.

The SADAG has formed partnerships with communities, schools, universities, churches, youth groups, prisons, corporations and the government’s directorate of mental health and substance abuse in the Department of Health, and are often requested to give talks on mental health issues.

They also produce educational materials including free multilingual brochures, audio cassettes and speaking books, which are available in several languages and are also able to provide information to the illiterate people.