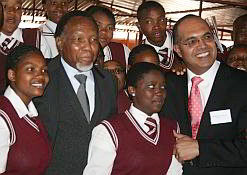 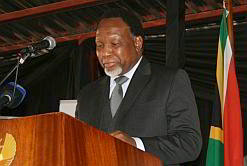 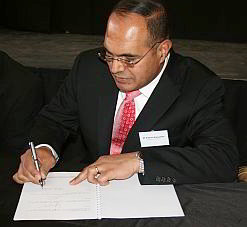 Memezelo Secondary School in Soshanguve, north of Pretoria, is the latest public school in South Africa to enter into a beneficial partnership with an established private sector group.

Leading financial services group Alexander Forbes has adopted the school in a bid to help it improve the quality of its education output. The cooperation was formally launched on 3 August at Memezelo.

Alexander Forbes will share expertise – ranging from financial management to leadership skills – with Memezelo, with the aim of advancing administration and teaching at the school. The ultimate goal is an improvement in matric results.

Monetary investments into Memezelo will come at a later stage, said Alexander Forbes CEO Edward Kieswetter. For now the focus is on stabilising human capacity.

Initial investments will go towards fixing the school’s hall and several classrooms, as well building a computer laboratory and a library. “We’ll start looking at building those over the next few months,” said Kieswetter

Alexander Forbes conducted a security risk audit at the school, and found that security needs to be bolstered. This, too, will be taken care of.

Kieswetter has set up a mentoring relationship with Memezelo principal Prince Maluleke, which involves the transfer of management and leadership skills. The principal was invited to Alexander Forbes’ leadership conference held in Cape Town in January 2011, where, he said, he learnt a lot.

Management teams from both sides will also meet for training programmes, while teachers have received education in personal finance management. “A financially healthy teacher is a productive teacher,” said Maluleke.

HIV/Aids training sessions for teachers have started, and will be conducted over 12 months.

The partnership is a direct result of Deputy President Kgalema Motlanthe’s involvement in Memezelo’s affairs. He adopted the school in January 2010 to help it improve.

“I am confident that this commitment will go a long way towards improving the quality of education in this school,” said Motlanthe, speaking at the launch. “Through this partnership we will turn Memezelo into one of the highest performing schools.”

Formerly one of Gauteng’s more troublesome schools, Memezelo is turning the tide on poor matric performance, lack of order and mismanagement. The school scored an 83.3% matric pass rate in 2010.

Kieswetter said Alexander Forbes plans to sustain the relationship with Memezelo over many years to come. “It’s a journey that will unfold.”

Alexander Forbes will award bursaries to Memezelo matriculants who pass with flying colours.

Matric pupil Babuyile Ncube fancies her chances of obtaining the coveted bursary. An orphan dependent on her grandmother, she’s fully aware that the bursary could be a life-changing opportunity.

“It’s up to me to take this opportunity. I have to work hard,” said Ncube.

The teenager, who wants to enrol for a biotechnology degree, is confident of her examination prospects. “I have many chances in making it. I need the bursary.”

Principal Maluleke encouraged his pupils to work hard. “Go get those As, they will take all of you to university,” he told the pupils.

A call to adopt schools

The government is confident that more businesses will heed its call to invest in public schools, scores of which are still disadvantaged.

Alexander Forbes’ initiative is “one of the first of many that I hope will continue to follow from the private sector,” said Motlanthe.

“We encourage others from the business sector to heed this example as part of their corporate social investment programmes.”

While the government was “acutely aware” that it’s responsible for the achievement of quality primary education, it also needs help from businesses, added the deputy president.

Bopape added that the education department has done well in transforming the school into an environment conducive to learning.