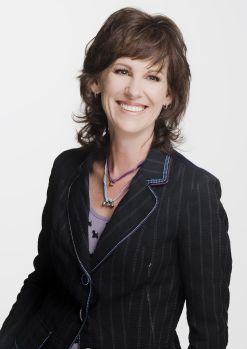 CEO of Primedia Broadcasting Terry Volkwyn
has made it to the finals of the Vodacom
awards.
(Image: Nick Bolton)

Five gutsy South African women who have made bold moves in the local media industry have been named finalists of the 2009 Vodacom Women in the Media awards.

Established in 2002 as an initiative of The Media magazine, the competition is the only event in South Africa that exclusively recognises and honours women who have made outstanding progress within the media sphere across the content, commercial, and academic fields.

Nominees are judged on their contribution to growth and development of media in the past 18 months.

Influential women from all media sectors, including research, business, editorial, sales, and education are considered for the competition.

This year’s finalists are Professor Jane Duncan, the former executive director of the Freedom of Expression Institute, who now holds the chair of Media and Information Society at Rhodes University; Esmaré Weideman, editor of You, Huisgenoot, Drum, You Pulse and Huisgenoot Pols ; Terry Volkwyn, CEO of Primedia Broadcasting, and Debora Patta, group editor-in-chief of eNews.

In her new job at Rhodes University, Duncan will focus on research and information dissemination about the information society, a society where information and access to it play a central role in the economy and people’s lives.

Esmaré Weideman became the youngest editor of You magazine when she was appointed in 2000. By 2002, her role was extended to include the editorship of Huisgenoot , making her the first woman editor of Media24‘s two most profitable weekly publications, with a combined readership of around 4-million.

In 2005 her responsibilities were further broadened to take on a third title, Drum magazine. This made Weideman responsible for overseeing the largest weekly readership in Southern Africa.

Having been appointed as CEO of Primedia Broadcasting in 2002, Terry Volkwyn is responsible for the four radio stations in the Primedia stable: Talk Radio 702, 94.7 Highveld Stereo, 567 CapeTalk and Kfm 94.5.

A decision was taken in 2003 to integrate the sales teams of Talk Radio 702, 94.7 Highveld Stereo and 567 CapeTalk to streamline the selling process. This was extended in 2004 to include Kfm, as well as the newsroom operations of all four stations, streamlining news, sport and traffic across the board.

This was a massive project, which Volkwyn successfully managed. It saw success across the board at 94.7 Highveld Stereo, while Talk Radio 702 turned things around, generating revenue in excess of R75-million.

Under Volkwyn’s guidance, 567 CapeTalk broke even and has recorded an increasing profit, while Kfm has shown a general improvement in gross revenue.

As part of the integration strategy, the news departments across all four stations merged to form a single news brand, Eyewitness News, which launched a website in 2008.

Since Volkwyn took the reins, all four stations have become well known for their outreach initiatives – best known of these is the Christmas Wish, which airs on the Rude Awakening on 94.7 Highveld Stereo and 94.5 Kfm breakfast during the festive season each year.

Volkwyn has served as chairperson of the Radio Committee of the National Association of Broadcasters for four years, since 2002, and has been the driving force behind the Radio Advertising Bureau. She was recently appointed to the board of Kaya FM.

Award-winning investigative journalist Debora Patta has been in the industry as both an on-air newswoman and a senior editorial manager for more than 20 years.

She is well known for her courageous, in-depth investigation as anchor for current affairs show 3rd Degree , which has a weekly slot on the independent free-to-air television station e-tv.

She is renowned for her coverage of Nelson Mandela’s release from Robben Island through to his election as South Africa’s first black head of state and his presidency.

Patta moved to e.tv in 1998 and in addition to hosting 3rd Degree , she is the programme’s executive producer, as well as the group editor-in-chief of eNews Channel.

She has trained and mentored a generation of reporters and led the team that launched South Africa’s first 24-hour news service.

She has covered stories ranging from South Africa’s emergence from apartheid, the Rwandan genocide, Princess Diana’s death, 9/11, the Obama election campaign and virtually every major event in South Africa’s history over the past 20 years.

Of this year’s pick of finalists, founder of the award concept and publisher of The Media , Sandra Gordon, said: “Once again this year our editorial board was impressed with the quality and quantity of nominations.

“We also focus attention on recent achievements. I am confident that the calibre is of the usual high standard and that these women will stand as role models for young people considering a career path in the fourth estate.

“These are women who have invested their time and knowledge into promoting the media industry, whether it is through training and skills development or increasing the all-important audience figures of their respective products.”

Past winners of the award include Ferial Haffajee, then editor of the Mail & Guardian , and Libby Lloyd, the former CEO of the Media Development and Diversity Agency.

The awards will be presented at Summer Place in Johannesburg on 30 July.

In addition to the 2009 Women in the Media Awards, the Rising Star Award – given to an under 30-year-old making her mark in the industry – and the Lifetime Achiever Award will also be presented at the event.

Previous recipients of the Lifetime Achiever Award are Jane Raphaely of Associated Magazines and Barbara Cooke of Target Group International.