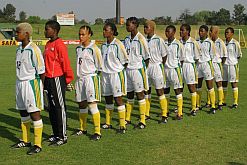 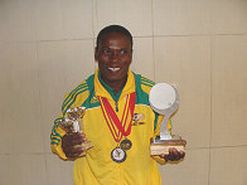 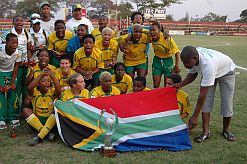 The victorious Banyana celebrate after
beating Namibia in the final of the 2006
Cosafa Cup women’s tournament.
(Image: Cosafa) 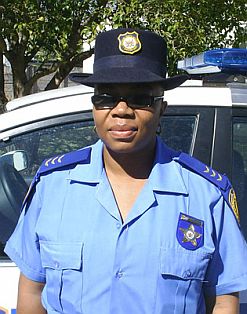 Two exceptional South African women have made the headlines in recent months. Noko Alice Matlou, striker for the national women’s team Banyana Banyana, is Africa’s woman footballer of the year for 2008, while Zukiswa Sapepa has become the country’s first female traffic station commander.

The two are the latest in a long line of South African women whose achievements have captured the interest of the world. The likes of Judge Navanethem Pillay, Olympic and Paralympic swimmer Natalie du Toit, and scientists Tebello Nyokong and Samantha Petersen have all been lauded internationally – and they represent just the tip of the iceberg.

The Beautiful Game has a new shining star. Banyana Banyana striker Noko Alice Matlou has walked off with the continent’s top prize for women – the African Woman Footballer of the Year trophy for 2008 – at the Confederation of African Football’s (CAF) annual awards ceremony, held in Lagos, Nigeria, in February.

Not only is she now the continent’s outstanding woman footballer, but she also becomes the first South African to win an individual CAF accolade. Only two others before her have made the shortlist for the honour – current team-mate Portia Modise and former Banyana captain Desiree Ellis.

“The award has been dominated by players from North Africa,” commented the triumphant Matlou. “I am excited at winning the award. Credit should go to my team-mates for their support.”

With 23 goals in 20 games for Banyana under her belt, 2008 was a prolific year for the 23-year-old Matlou, who plays for the Limpopo-based Brazilian FC team when at home.

Matlou helped her national side to their first ever African Women’s Championship final in November 2008. Together with Equatorial Guinea’s Anonma, she scored six goals in the tournament, including a hat-trick in the semi-final and a goal in the final, and shared the Golden Boot award with her Central African rival. South Africa lost 2-1 to Equatorial Guinea in the final.

Playing for the South African under-20 team, Basetsana, in the Women’s Championship of the Council of Southern Africa Football Associations, Matlou again stole the show. Another hat-trick in the final saw hosts Angola brought to their knees, and Matlou’s tally rise to an impressive 12 goals in five games. She was the tournament’s top scorer and also took the Player of the Match award three times.

South African Football Association (Safa) president Dr Molefi Olifant said that Matlou’s achievement will inspire thousands of women footballers in the country. The elated Olifant said, “Noko Matlou has made Safa and the country proud. This important milestone comes on the eve of major developments in the South African women football arena – her accomplishment is not an accident.”

Olifant, who is also chair of CAF’s women football subcommittee, was referring to the newly launched Absa Women’s League, backed by major banking group Absa in partnership with Safa. The tournament is intended to be a breeding ground for the future stars of South African, African and world football.

Safa CEO Raymond Hack said that Matlou’s “historic achievement” is cause for great optimism about the future of football in South Africa. Banyana team manager Fran Hilton-Smith added that Matlou’s victory is a proud moment to be cherished for many years to come.

Matlou is tipped to lead the national team in their next challenge, the Eight Nations Tournament in Cyprus in March, where they will be the only African representative. Banyana will clash with England, Canada, Holland, Japan, Scotland, Russia, and hosts Cyprus. Participation in the tournament is by invitation only.

The team is currently ranked 58 out of 116 teams with official rankings, with only two other African countries – Ghana (43) and Nigeria (29) – ranked above them.

Meanwhile, at home there is a new commander at the Ngcobo traffic station in the Chris Hani District Municipality of the Eastern Cape province. Zukiswa Sapepa has made history by becoming the first female top cop ever in the Eastern Cape’s Department of Roads and Transport. With 23 officials under her command, she stepped into the driver’s seat towards the end of 2008.

After school Sapepa trained as a teacher, and then became a shop assistant in the retail sector before resuming her studies and obtaining her Senior Primary Teachers Diploma in 1996.

A shortage of teaching posts forced her to join insurance giant Old Mutual Group Schemes in Mthatha in 1997 as a client care adviser. Four years later she joined the Standard Bank of South Africa as a consultant working in Butterworth, and the very next year finally realised her long-standing goal by joining the then Eastern Cape Department of Transport as a traffic officer. She reported for duty in December 2003 after completing her basic training.

“This was always my ambition from childhood,” said Sapepa. “Although this was a lesser package, I felt that this is what I always wanted to be in life, to be in a position to secure a safer road environment for our road users.”

Her leadership abilities were noticed when she worked in the elite Traffic Special Operations Unit, a roving unit that covered the whole of the Eastern Cape. In 2006, she took the position of principal provincial inspector in Queenstown. Later in the same year she was appointed as a budget officer for Traffic Control in Chris Hani District and for a short while she was the acting station commander at Queenstown station.

Shortly thereafter she sat on the committee of the Performance Management and Development System, as well as the interviewing panel in the Chris Hani and Ukhahlamba Districts.

Sapepa has vowed to instil pride for the profession in her colleagues – most of whom are men – and to work closely with the community to raise awareness of good driving practices. Ngcobo has a history of high accident rates, caused to a large extent by stray animals.

“I love my job and therefore I will motivate those I work with, but I will not tolerate corruption,” said Sapepa adamantly. “Every time I get an opportunity to talk against corruption I will, as this has tarnished the image of the profession.”

Member of the Executive Council for Roads and Transport in the Eastern Cape, Gloria Barry, congratulated Sapepa, claiming that her achievement was a victory for women’s equity. “It marks the realisation of our objective of promoting gender equality, equal access to opportunities and most importantly, the emancipation of women from all forms of oppression.”