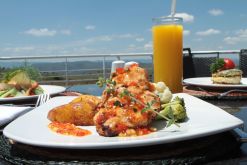 The back view of the Tumulus building,
situated at the Maropeng Visitors Centre,
looks towards the future, in contrast to
the front view which is built to resemble
an ancient burial mound.
(Image: Maropeng)

World heritage site Maropeng, widely recognised as the place from which all humankind originated, is gaining acclaim as a top green destination in South Africa.

Maropeng, situated at the Cradle of Humankind heritage site in the Gauteng province, has been awarded a gold certificate of membership by environmental certification and ratings organisation, the Heritage Environmental Management Company, for its commitment to sustainable business practices.

This means that Maropeng complies with the environmental performance standards of the programme’s gold classification.

Maropeng underwent an extensive environmental audit process to achieve its gold status. All its operations were rated, from management systems and biodiversity management, to purchasing and procurement.

Besides giving them the chance to learn about the origins of humankind, Rubin hopes that a visit to Maropeng will motivate visitors to care of the environment.

“By highlighting the eco-friendly work that is done in the Cradle of Humankind we hope to inspire visitors to follow this example,” he says. “We want to encourage visitors to consider their carbon footprint and think of ways to conserve the environment.”

In keeping with local procurement and sustainability trends dominating the food industry, one of the biggest interventions at Maropeng has been in its kitchens and restaurants.

“For us it is not just about getting a certificate, but to change the way we do things, reduce food wastage, become sustainable and save energy,” says Patrick Mutavhatsindi, food and beverage manager at Maropeng.

All Maropeng’s restaurants – Tumulus at the Maropeng Visitors Centre; the Market Place Restaurant; Sterkfontein Restaurant and the Maropeng Hotel – are participating in various greening initiatives.

These include recycling of used cooking oil and kitchen waste, and procuring the majority of fresh produce from local farmers.

According to Mutavhatsindi, 65% of the food on Maropeng’s menus is sourced within 15km of the Magaliesberg and Cradle of Humankind areas.

In doing this, Maropeng is supporting local farmers, reducing its carbon footprint and ensuring that food is prepared using only the freshest produce.

“All fruit, vegetables, meat, poultry, milk, eggs and herbs are locally sourced. We really want to promote local farmers,” he says. “It’s good to know that visitors can leave here knowing that not only have they enjoyed great food, but that it was locally and sustainably sourced.”

“We use biodegradable take-away cups, teaspoons, knives, forks and plates which, once disposed of, are carefully sorted for recycling,” Mutavhatsindi explains.

In the kitchens, stoves are switched off when not used and a refillable combustible gel product is used to keep portable food servers warm.

Maropeng has introduced other sustainability measures as part of its waste-not-want-not approach.

Mutavhatsindi says that findings of a recent Food and Agriculture Organistion (FAO) report highlight the global problem of food wastage – something that Maropeng is addressing in its daily operations.

The recent global food losses and food waste study suggests that about one-third of food produced for human consumption is lost or wasted globally, amounting to about 1.3-billion tons per year.

“The huge amount of food waste inevitably means that huge amounts of the resources used in food production are used in vain,” he says. “The greenhouse gas emissions generated by the production of food are also unnecessarily high.”

According to the FAO study much more food is wasted in industrialised nations than in developing countries.

It is estimated that per capita food waste by consumers in Europe and North America is 95 to 115 kg per year, while the figure in sub-Saharan Africa and South/Southeast Asia is only 6 to 11kg per year.

Mutavhatsindi says while it is encouraging to see that sub-Saharan Africa’s wastage is still much less than that of its European counterparts, this figure should not increase.

“As a result we have a waste-not-want-not philosophy in our kitchens when it comes to disposing of food and kitchen waste,” he says.

Leftover food from restaurants is distributed to permanent staff, which makes it possible for employees to also enjoy the tasty meals that have been prepared for guests.

Mutavhatsindi has also introduced a plan for used cooking oil.

“When we saw that on average approximately 30 litres of cooking oil was disposed of per week, we decided to look for more sustainable options,” he says.

Instead of throwing away the oil and running the risk of contaminating surrounding wetlands, all cooking oil waste is collected by a Johannesburg-based food oil disposal company, from where it is recycled into biodiesel and soap products.

Rubin says that adopting a sustainable approach to business is challenging, but possible.

“When the building was designed and built, current technology available now was not available then – it is therefore necessary for us to be creative in the way we manage the facility,” he explains.

Maropeng’s greening strategies also include a series of complex wetland systems that process impurities in water, allowing it to be re-used for irrigation purposes.

Each year, more than 250 000 people visit Maropeng at the Cradle of Humankind site, one of eight World Heritage Sites in South Africa, and the only one in Gauteng.