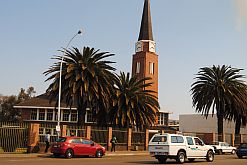 Various neighbourhoods in Mahikeng will
be upgraded.
(Image: Bongani Nkosi) 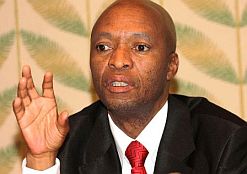 Mahikeng, the capital of the North West province, will receive a R33-million (US$4.8-million) government-funded facelift to transform it into a model city.

The provincial government announced the investment on 18 January 2011 in response to concerns that infrastructure in Mahikeng has been deteriorating.

Part of the aim is to elevate the city to standards expected of a provincial capital city. “The R33-million is just a drop in an ocean if indeed we really want to give Mahikeng the look and a feel of what a capital city of the province should be,’’ said MEC for Public Works, Roads and Transport Mahlakeng Mahlakeng.

Priority projects, which will begin soon, include refurbishing government buildings in Mahikeng and upgrading roads there.

Mahikeng was known as Mafikeng until its name was officially changed in 2010.

The neighbouring town of Mmabatho, where other government buildings are located, will also score from the investment with upgrades set to take place there as well.

“My department will fast-track the refurbishment and the proper maintenance of government buildings, especially office buildings in Mahikeng and Mmabatho,” said Mahlakeng.

He added that the ultimate aim is to attract further investments to spruce up Mahikeng. “I will also approach the National Department of Public Works … to find out from them how they can contribute in this massive project to give Mahikeng a desired facelift.”

The R33-million in funding has been sourced from the budgets of other programmes being run by the North West Department of Public Works, Roads and Transport. Mahlakeng pointed out that this would not “compromise any of our other programmes and activities before the end of the financial year in March 2011”.

The department will go all out to encourage other provincial departments, as well as the Mahikeng Local Municipality and the Ngaka Modiri Molema District Municipality, to help raise more funds for facelift projects, he added. “I will persuade them to dig very deep into their coffers to match our R33-million pledge and even go beyond.”

Projects will form part of the government’s Expanded Public Works Programme (EPWP), which has created jobs for many of South Africa’s unemployed youngsters. Adopted in 2004, EPWP aims to reduce the unemployment rate by creating 4.5-million full- and part-time jobs.

The North West’s roads have been affected by the torrential rain that’s recently fallen in most parts of South Africa, and the problem of potholes has been exacerbated.

The province has injected more than R180-million ($26-million) into major road repairs and maintenance following the bad weather. A total of 28 municipalities across the country, including four in the North West, have been declared disaster areas.

Contractors for road maintenance and repairs will be appointed very soon, according to the MEC. “At least six roads per district will be resealed, patched and marked before the end of the month,’’ he said.

Construction of a tarred road between Ganyesa and Tlakgameng, two districts within the province, is also expected to start soon.