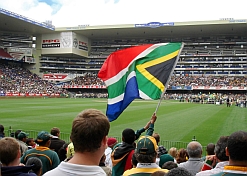 An international rugby match at Newlands
in Cape Town, one of South Africa’s most
prestigious venues. (Image: Wikimedia)

Around 50 000 dedicated Lions supporters
will descend on South Africa during the
forthcoming tour. (Image: SA Rugby) 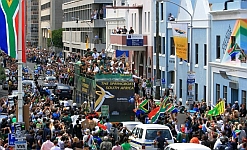 The victorious Springboks are the heroes
of the moment after winning the Rugby
World Cup for the second time in 2007.
(Image: Cape Town Daily Photo)

The forthcoming British and Irish Lions rugby tour, set to kick off at the end of May 2009, is expected to inject around R1-billion (US$109-million) into South Africa’s economy – and that’s just the beginning.

In fact, with South Africa hosting several major sporting events throughout 2009, including three high-profile international tournaments, economists are predicting a boost of R4-billion ($437-million) into the country’s economy. This unprecedented amount, say experts, could be enough to cushion South Africa’s economy from the worst of the global financial crisis.

The Indian Premier League and International Cricket Council‘s Champions Trophy are two lucrative tournaments that are set to take place in April to May and September to October respectively and will attract thousands of die-hard cricket fans to South Africa’s shores.

The Fifa Confederations Cup, which is viewed as a dress rehearsal for the 2010 Fifa World Cup, kicks off on 4 June, bringing eight of the world’s top football teams together. As if that weren’t enough, sports fans can look forward to a feast of rugby.

Taking on the British

In 2009 the British and Irish Lions will step onto South African soil for the first time in 12 years. The current tour marks the 28th visit to South Africa by the Lions, a combined team featuring the best players from England, Ireland, Scotland and Wales, since 1890.

South Africa’s national team, the Springboks, are presently ranked second in the world, just three points behind the All Blacks of New Zealand, while Ireland is ranked fourth, England comes in sixth, Wales seventh, and Scotland 10th.

The tournament starts on 30 May at the Royal Bafokeng stadium in Rustenburg, North West province, with a game against the Royal IV. The first international takes place on 20 June in Durban, when the mighty Springboks, the current rugby world champions, clash with their northern hemisphere opponents.

Over the course of 10 matches, the Lions will take on four provincial teams, two invitational combinations, the Emerging Springboks, and the Springboks. They will visit South Africa next in 2021.

According to the tour’s project manager, Andre Homan of South African Rugby, around 50 000 fanatical British rugby fans will follow their heroes to South Africa. Most are expected to stay at least three weeks.

Of the estimated R1-billion income, at least R250-million ($27.3-million) will come from direct foreign exchange revenue, making the Lions tour the biggest international sporting event hosted by South Africa to date. The R1-billion figure, said Homan, was drawn from the last Lions tour to New Zealand in 2005, when about 30 000 British fans visited that country.

“They contributed direct foreign exchange of R720-million ($78.6-million),” he explained, “and there was a total GDP impact of R750-million ($81.9-million). So we can safely say with the numbers that we’re expecting, that we’ll top R1-billion in direct earnings very easily and that is hard currency earnings.”

The upcoming cricket, football and rugby extravaganza will also enhance South Africa’s well-established reputation as a successful host of sporting events, with coups such as the 1995 Rugby World Cup, the 1996 African Cup of Nations and World Cup of Golf, the 1998 World Cup of Athletics, the 2003 Cricket World Cup, the 2006 Paralympic Swimming World Championships, and the inaugural World Twenty20 Championship, held in 2007.

And the success of the Lions tour will give impetus to South Africa’s bid to host both the 2015 and 2019 Rugby World Cups, said Homan.

How to buy Lions tickets

Tickets for the Lions tour are now on sale to the public, and South African supporters wishing to book their place in the stands have a number of options:

Ticket prices have been tailor-made to suit all pockets, with prices ranging from R60 for scholars and R115 for adult spectators at the Emerging Springboks game, to between R170 and R285 for a provincial game, to a wallet-crunching R1 140 for the Springbok/Lions games.

The benefits of the multitude of sporting events are already showing global results. FirstCape Wines, one of South Africa’s most popular export brands to the UK, and an official partner sponsor of the Lions, has become the best-selling South African wine brand in the UK. Figures released by market research company AC Nielsen in March 2009 confirm this. FirstCape is the first ever wine sponsor of the national rugby team.

Lions CEO John Feehan was delighted with the news, adding, “With a fantastic tour to South Africa ahead, we’re immensely proud to have the UK’s number one South African wine behind us and hope to replicate FirstCape’s success on the pitch.”

FirstCape director Greg Wilkins hinted at more exciting things to come when he revealed that the Lions FirstCape Legacy project will be unveiled during the tour. “The project will benefit the local community around our winery in South Africa, and is a very important part of what we are doing.”

From the South African side, the R25-million ($2.7-million) deal signed by South African Breweries (SAB), to give them title sponsorship of the tour, is the richest in the history of Springbok rugby, said Homan. Accordingly, the tour will be known as the Castle South Africa 2009 Lions Series, after the brewing giant’s best-selling Castle Lager brand.

“In terms of what we’ve seen in the past happening with Lions tours, we are confident that this will be the biggest thing before the World Cup next year,” he commented.

For those who can’t make it to the stadiums, SAB is planning to set up SAB Bok Towns in Johannesburg, Durban and Cape Town, where fans can experience all 10 games on big screens. The Johannesburg event will take place at Montecasino, while Durban fans will meet at the Suncoast Casino and in Cape Town, supporters will gather at La Med in Clifton.

According to SAB, there are also plans in motion to set up similar venues in relevant host cities on the days that provincial games take place, thereby giving fans every chance to see their national team in action.

In a related story, no fewer than 17 former Springboks, whose distinguished careers span over 200 years, have been nominated for the International Rugby Board’s (IRB) 2009 Hall of Fame. Each one has played a pivotal role in the development of the sport in South Africa.

With the much-anticipated British and Irish Lions tour just around the corner, the IRB decided that in 2009 only players from the Lions and Springboks would be nominated for induction. Voting by the general public is open and closes at noon (GMT) on Friday 8 May. South African rugby fans are encouraged to vote for their favourites right away on the IRB website.

The results will be announced during the Lions tour.