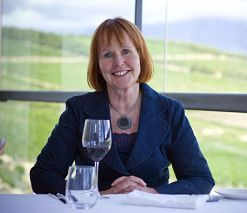 It is thanks to the work of Wines of South Africa (Wosa) chief executive, Su Birch, that most Cape wines are produced under environmentally sustainable conditions. And her efforts have paid off.

On April 23, the British trade publication, The Drinks Business, presented Birch with its highest accolade, its Green Awards Lifetime Achievement Award. She was recognised for her work in promoting sustainability in the South African wine industry. Birch was not in London to collect the award, which was accepted on her behalf by Wosa’s representatives in the UK.

She has been the chief executive of the association for the past 13 years and has dedicated much of her tenure to environmental and ethical causes in the industry. Birch comes from a marketing background. Wosa head hunted her in 2000, when she was working in the fruit sector. Taking the job without much knowledge of wine, she determinedly went about learning as much as she could about the industry.

Awards are nothing new for Birch. She has been named The Drinks Business Woman of the Year and has received the International Wine and Spirit Competition’s Women in Wine Award. Wine Intelligence, a British market analysis group, named her one the 10 most influential personalities in the world of wine.

She was instrumental in bringing together South Africa, New Zealand, the United States, Chile and Argentina at the annual international trade fair, Prowein. She also helped conceptualise and organise The Beautiful South, an exhibition of South African, Argentinian, and Chilean wines that will be held in London in September this year.

However, Birch said her accolades were not achieved singlehandedly, and she credits her team for making things work. “It is a 24-7 job and I have an incredible team behind me,” she said.

Seals that make a difference

One of the ways she got wine producers thinking about the environment was by introducing the Sustainability Seal. It is the first industry-wide initiative of its kind anywhere in the world. Birch said it promoted production integrity from the vineyard to the consumer.

Wineries are granted this status if they met a number of criteria, which include minimising the use of chemicals in growing their grapes and using recycled water. Currently, 90% of wines under Wosa carry the Sustainability Seal.

As a result, Birch said, for every vineyard hectare, 1.3 hectares of natural land had been restored to the Cape Floral Kingdom, the region in which most South African wine farms are based. This also formed part of the Bio-Diversity Wine Initiative, which is spearheaded by Birch.

“What has happened is the eco-system has been revived. We have got more insects and birds. And we are seeing more of the Cape mountain leopard, the area’s apex predator,” she said.

According to Birch, the Cape Floral Kingdom, the smallest of six floristic regions in the world, has more plant species than anywhere on Earth. However, she said that there was very little of this eco-system left.

In 2012, Birch introduced the Ethical Seal, also the first of its kind. It promotes fair labour practices among wine producers. “The seal ensures the health and safety of workers on the farms,” she said. In addition to these standards, 65 percent of South Africa’s wines were under the Fairtrade label.

Fairtrade is an international organisation that ensures products such as wine, coffee, and tea are produced and sold in an ethical manner. It helps to create opportunities and better working and living conditions for marginalised farming communities.

Birch said such standards gave the consumer, particularly importers, confidence that they were buying a product that cared for the environment and industry workers. “Major importers such as Sweden, Germany and the Netherlands are concerned with both environmental and ethical issues,” she said.

There is a structural change taking place in the way wine is being sold, though, which could affect the industry’s growth. Supermarkets abroad have more bargaining power insofar as they buy wine in bulk and bottle it at the destination. Bulk exporting has become topical in the industry. Experts argue that the change from bottled wine to bulk has hindered growth.

Producers in South Africa are not seeing the larger share of the packaging and wholesale revenue, which is as much as US$1-billion (R9-billion) a year. Instead, the destination market, consisting mainly of overseas companies, is benefitting. Furthermore, Birch said, the local industry lost 107 jobs for every 10-million litres of bulk rather than bottled wine exported.

Transporting South African wines is an expensive undertaking because the country is far from its main markets. Birch said the costs of packaging material and the increase in the environmental footprint of bottling were major factors in choosing bulk over bottled exportation.

The future for Birch

Shortly after receiving the award from The Drinks Business, Birch announced that she would resign from Wosa at the end of September to pursue a personal project that had been put on hold for too long. “I want to spend time giving back to the community. I want to help children in Masiphumelele Township [in Cape Town] with their English.”

In the next few weeks, Wosa will be looking for her successor. She said the person best suited for the post must have “broad shoulders and a sense of humour”. “The wineries are our bosses. So whoever is chief executive must remember they have 500 bosses,” she said.

After helping the children of Masiphumelele, Birch said she planned to develop cost-effective solutions for a number of industries. She aimed to play a role in helping South African businesses devise creative solutions for financial challenges they may encounter.