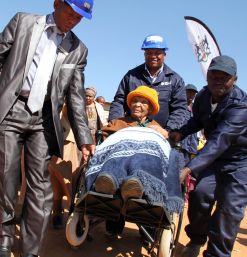 Gogo Mazibuko is helped by members of her community wherever she goes. 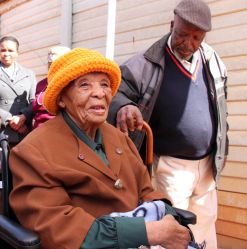 Mazibuko was born 119 years ago on Mellodora farm in Ottosdal in the North West province, on 11 May 1894, according to her identity book, which was issued in 1986, and has outlived several of her seven children. She was the oldest of 10 siblings, and lives in Jobetina outside Klerksdorp, with her 77-year-old son, Tseko. She still makes her bed every morning, dresses herself, likes to cook, and does her own laundry. Then she spends the day watching television, according to an interview with The Sowetan newspaper.

“I’m doing alright,” she said. “God gave my life in abundance, plus a bonus. I am very old now.” Her son said his mother was still mobile but could not stand for long periods because of arthritis in her knees.

Although not the oldest person to have lived, Mazibuko appears to be the oldest person alive at present, and the oldest South African. Gogo (granny) Johanna’s birth date is being scrutinised by the Home Affairs Ministry, and it will soon confirm its findings.

The North West provincial Department of Social Development, Women, Children and People with Disabilities has said its MEC (member of the executive committee), Collen Maine, has established Operation Dignity. The objective is to raise awareness of the rights of elderly people in the province. Gogo Johanna was named specifically – the report says that Operation Dignity will get the community as well as trained youth involved to help improve her living conditions.

Gogo Johanna’s nearest rival, Jiroemon Kimura of Japan, died of natural causes in June this year – he was 116 and so far is the oldest man to have lived. Another woman, Japan’s Misao Okawa, is 115 years old. Guinness World Records reports that Okawa is in good health, surrounded by her three children, including her 90-year-old son Hiroshi, her four grandchildren, and six great grandchildren.

But none of these supercentenarians – you have to be older than 110 to qualify – have reached the age of the oldest person to have lived: Frenchwomen Jeanne Calment, who lived to be 122 years and 164 days old. She was born on 21 February 1875 and died in 1997. She met artist Vincent van Gogh in 1888, when he came into her uncle’s shop to buy coloured pencils.

Calment lived on her own until shortly before her 110th birthday, when she moved into a nursing home. She ascribed her longevity and youthful appearance to olive oil, which she poured on all her food and rubbed on to her skin, drinking port wine, and eating a kilogram of chocolate every week. She smoked from the age of 21 to 114, although reportedly not more than two cigarettes a day.

The average lifespan of South Africans is 59.6 years, according to the mid-year population estimate of Statistics South Africa. This is an improvement on the World Health Organisation‘s 2011 life expectancy data, which put it at 58, and also on the figures for the 2011 census, which gave a similar figure.

Advances in longevity are attributed to improvements in the national health system, as well as greater awareness among citizens of lifestyle and healthy choices. This comes after a decreasing trend in life expectancy from 62 in 1990 down to 50 in 2007, according to a 2009 report from the South African Institute of Race Relations. The institute forecast a further decrease in life expectancy between 2006 and 2011, but the latest data would seem to quash that prediction.