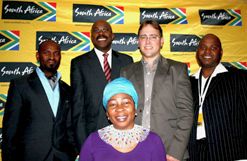 Green energy and food security were the focus of the recent Brand South Africa Stakeholder Summit in KwaZulu-Natal, where guest speakers showed how they epitomise the values of innovation and sustainability in the province.

Initiated by the International Marketing Council (IMC) of South Africa and taking place in each of the nine provinces, the summits aim to increase provincial participation in the nation-branding effort and encourage active citizenship – which, in turn, will help position the country as a top investment and tourism destination.

One of KwaZulu-Natal’s exemplary innovators at the summit was Envitech Solutions – an environmental engineering firm specialising in managing waste and converting it into electricity.

“With ideas and some dedication to what we’re trying to do in South Africa, we’re showing that it’s possible to make something great out of what you would ordinarily throw away,” the company’s managing director Brendon Jewaskiewitz said.

Envitech began as a small family business in 2003 and over the years has grown into a globally recognised concern with an active presence in South Africa, Kenya, Somalia, Angola, Nigeria and the Middle East.

One of its major international projects in Doha, Qatar, included moving 6.5-million cubic metres of waste, which had previously been dumped into the sea, to a new sanitary landfill site. It took the team 13 months of working 24 hours a day to complete the project.

Envitech has also been involved in landfill site management in Amman, Jordan, and has recently been acknowledged as a service provider for Shell at the world’s largest gas to liquids plant in Qatar.

Closer to home, the company constructed Africa’s first landfill gas-to-electricity project at the La Mercy and Marianhill landfill sites in Durban, with the latter winning a number of international awards.

Today the Marianhill site supplies about 1MW of electricity to the municipal grid.

“This is the first landfill gas-to-electricity project to be developed in terms of the CDM (Clean Development Mechanism) under the Kyoto Protocol in South Africa and Africa,” said Jewaskiewitz.

Electricity generation is not the only spinoff of this venture, as it’s also helping destruct methane which makes up 40% to 50% of landfill gas. As a greenhouse gas, methane is 21 times more potent than carbon dioxide.

The World Bank has signed an agreement with the eThekwini Metro Municipality, under which Durban falls, to buy the carbon credits generated through this eradication of methane.

Envitech has also been involved with gas-to-electricity conversion at the Bisasar Road site in Durban, which one of the largest landfills in the southern hemisphere.

“We were responsible for the installation and operation of the first four 1MW units at the site. It now has six 1MW units and one 0.5MW unit running there continuously.”

Jewaskiewitz’s company also processes sewerage; shredded tyres; industrial, commercial and medical waste; as well as glass, paper and tin cans. The various by-products of this are either compost, electricity or water for re-use and irrigation.

In addition, Envitech is working on a landfill gas extraction project for the Ekurhuleni Metro Municipality, east of Johannesburg, and the first waste-to-electricity venture in South Africa for the Drakenstein Municipality in the Western Cape.

Its range comprises instant foods, food supplements, health and energy drinks, vitamin mixes and baby formula. Most of these are soya-based.

The way the company sources its raw materials helps it achieve its core values of sustainability and empowerment.

“We must be inclusive in how we procure our food for processing,” said Mpilende’s chief financial officer Thami Masuku.

“This must involve sensitivity to the environment and sensitivity to parts of South Africa which have not always been aligned to the mainstream economy.

“Our socio-economic responsibility is to work with communities in the rural areas, which are ideally placed to be our key suppliers.  We enable these societies to participate in a semi-commercial activity that produces our raw materials which we can then process into Mpilende foods.”

According to Masuku, this approach combined with the nutritional benefits of Mpilende products, helps support “the web of life”.

The company also exports its products to other African states where war and poverty has led to wide-spread malnutrition.

All foods produced by Mpilende are tested by the South African Bureau of Standards and endorsed by the Food and Drug Administration Board, the Nutrition Society of South Africa and the country’s Food Safety Corporation – among a host of other internationally recognised statutory bodies.

Such global backing has won the company and its products a range of accolades over the years, including Europe’s International Award for Quality in 2010 and the Africa Growth Institute’s SMME Award for 2009 in the category “best new business”.