While on the road, Sonja Kruse stayed in shacks, tiny houses, mansions and middle-class homes. She saw the good and the bad of South Africa, but one thing that remained the same was the lengths to which her hosts would go to make their guest feel welcome.

At the age of 35, Sonja Kruse set off on a trip that was to change the course of her life, and at the same time reaffirm an old way of life – the idea of ubuntu.

Kruse, who is originally from Eshowe in KwaZulu-Natal, began her 350-day life-changing journey in 2010 with one thing in mind: to unlock the meaning of ubuntu. Ubuntu is a humanist philosophy of fellowship and community and is an integral part of South African society. It is a philosophy that today is known cross the world.

“I had a dream and vision to walk and hitchhike across South Africa. And in this dream it was about connecting with people and collecting stories,” she explains about the motivation that drove her forwards. At heart, she wanted to hear the stories that were not in the newspaper headlines, “because as people we live in our own bubble believing the horrors of life as seen on the news, instead of exploring society and putting meaning to it by ourselves”.

She believes that by collecting such stories, society can highlight its humane side. This will allow us to paint a different picture in our children’s minds of what humanity entails in its core values. “The reality and what the journey was about is that 150 families opened their hearts and homes to me, a complete stranger, and that is really the spirit of ubuntu – despite the bleak picture newspaper headlines paint.”

As people, we have a connection, and if you tap into that connection, you will realise that nothing in society is random as we all are intertwined, she adds.

For the journey, Kruse crammed 28 items of clothing, two notepads, headgear and a rain poncho, first aid kit, toiletries, a camera and R100 (US$9) into her 33l rucksack. “I had to ask for everything,” she says. She was taken in by 150 families from 16 cultures in 114 towns.

Now 39, Kruse is reliving her journey, but this time for a different reason. “I’m reliving this journey to go back to those families that took me in and to deliver the book I wrote of my experiences,” she says with a smile.

While on the road, Kruse stayed in shacks, tiny houses, mansions and middle-class homes. She saw the good and the bad of South Africa, but one thing that remained the same was the lengths her hosts would go to, to make their guest feel welcome. During the trip, Kruse made R10 856 from people who gave her money, which she spent along the way. The largest single donation of R6 000 came from Old Mutual Insurance. 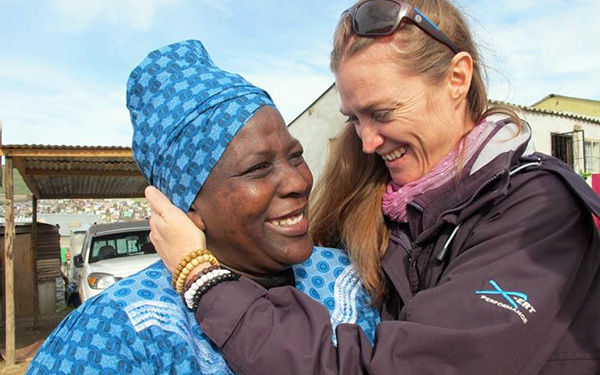 “Angelina Taitai from Kayamandi (Stellenbosch) receives us with open arms and fat kisses!,” writes Kruse. “She talks of how she always smiles. And because she always smiles, there is always something to smile about.”

Drawn from her 14 000 photographs and transcripts from her journey, Kruse has written a 250-page book about the experience. The Ubuntu Girl is available from retailers for R390. She wanted to give transcripts of the book for free to FunDza Literary Trust, an NGO that provides exciting South African stories through its mobile phone app. Its aim is to promote reading among the youth. Kruse wanted to do this because she thought that if the book had any branding on it, it would contaminate the meaning of her journey.

“I never wanted monetary reward for my journey,” she explains. “I wanted South Africans to acknowledge the value of ubuntu and show the world the hearts of ordinary South Africans.” Fortunately, Face 2 Face offered to publish the book and give her part of the profits. Face 2 Face is an imprint of Cover 2 Cover Books, a socially conscious publisher and founder of the non-profit literacy trust, FunDza.

If there are any more sponsorship deals in furthering the call for ubuntu, she adds, they will have to be with existing organisations that do similar things. “I’m not comfortable with brands as they tend to take away the meaning of something.” 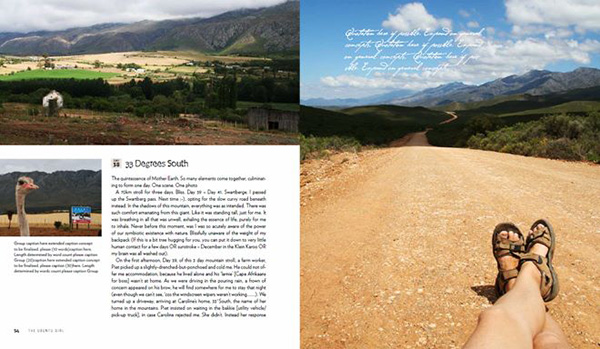 A page from The Ubuntu Girl, Kruse’s book about her experiences.

The journey that changed Kruse’s life had many layers, and she reflects on the highs and lows. It was life-changing in the way that it taught her there was a likeness about South Africans, which resonated in the mutually shared vision of the country. “I think it has also taught me that when you listen to someone else’s story, not to listen with your life experiences at heart but to completely listen to theirs, even if you do not agree with their standpoint.”

She was inspired by the spirit of ubuntu and a sense that with the westernisation of the world, South Africans were losing a huge pillar of the African way of life. She set out to see for herself whether this integral part of society was eroding or not. “I feel as Africans this is one thing we have to teach the world because the world has taught us so much. But I think we possess the blueprint of how humanity should live, like the old Nguni saying: ‘Umuntu ngu muntu nga bantu’, which loosely translates as ‘You are who you are because of others.'”

Although the journey was relatively free of drama, there were times when it got too much. “There were points along the road where I missed my creature comforts and I would do an EFT and book myself into a bed and breakfast for a week.”

It may have been a short cheat after many months on the road, but Kruse says she did not give up on her initial quest for the spirit of ubuntu. “I would enjoy these creature comforts for three days to a week but I would pick up where I left off and go searching for other people who would take me in. For example, Maggie from Klerksdorp would give me rest in her rat-infested dwelling and I would not even feel the least bit of regret as to why I’m doing this.”

There were also times when Kruse saw the ugly side of the country rearing its head. “There were times I felt like a woman rather than human, and there were times I felt white rather than South African.” In one instance, a truck driver wanted to take advantage of her for his giving her a lift. But she managed to resolve the issue by making him realise the impact of his actions.

Having taken almost a year on the ubuntu journey and a further three years on the book journey, some of Kruse’s relationships have suffered and she believes it will take time to mend them. “The book journey took three-and-a-half years of my life and I disconnected with certain aspects of my life. First of all, I wasn’t there physically when I took the trip and then I’m back but emotionally unavailable because the book is taking so much of my time.”

As much as her journey was about the connections people have through ubuntu, the quest to re-affirm that connection disconnected her inter-personal relationships. “I have some work to do in that aspect but when the book journey ends I will reconcile myself with myself and find Sonja again after being the Ubuntu Girl for so long.”