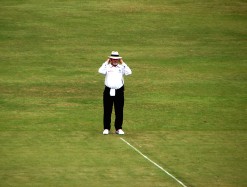 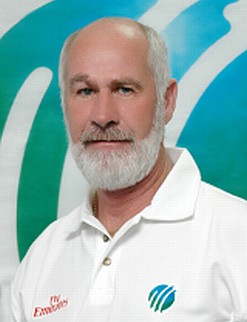 Koertzen retired after a distinguished
career in local and international cricket.
(Image: Cricinfo)

South African cricket umpire Rudi Koertzen, who retired as a match official in July 2010, is still in the game – as the newly appointed International Cricket Council’s (ICC) regional umpire performance manager for Africa.

The vastly experienced and well-liked Koertzen, nicknamed Slow Death because of his tendency to think long and hard before raising his finger to dismiss a batsman, stood in his last test match in July.

He officiated in the second and final test between England and Pakistan at the Headingley Carnegie cricket ground in West Yorkshire, UK.

Koertzen started his international career in a one-day game at St George’s Park, Port Elizabeth, in 1992 and made his test debut at the same venue a few weeks later. He became a full-time umpire in 1997 and his decision to retire was motivated by the wish to spend more time with his family in the small town of Despatch, also in the Eastern Cape province.

In the 13 years of his professional career he has seen great advances in technology, with the result that umpires now have any questionable decisions scrutinised by the entire cricket world through lengthy action replays on big screens in stadiums, monitors in officials’ rooms and televisions at home.

“Technology is there and will probably get worse, so to be successful in this game you just have to be more alert and get your decisions right,” he said.

The veteran said he was honoured to have the chance to still make a difference in international cricket and share his vast experience and knowledge with umpires at all levels.

“I look forward to contributing to the improvement of officiating in the region and working alongside all those involved in this. I am delighted to be given this opportunity of continuing to be part of this wonderful game and the wonderful profession of umpiring.”

He named the opening game of the 1999 World Cup at Lord’s as the highlight of his career, and Australian leg-spin wizard Shane Warne, a master craftsman loved and hated equally by fans, as the most challenging bowler to umpire. Koertzen’s cricket memoir is titled Slow Death.

Development of emerging umpires in Africa

Koertzen’s new duties will see him coaching, supporting and managing the performances of the ICC’s Elite and International Panels within the Africa region.

The Elite Panel of ICC umpires is a group of top-level officials appointed to stand in one-day internationals (ODIs) and test matches around the world, thus ensuring that umpiring standards in these important events are of the highest. Elite Panel umpires are regarded as the best in the world, and each officiates in about 15 ODIs and 10 tests annually.

The panel was established in 2002 with Koertzen and Dave Orchard representing South Africa, and at the moment includes lone South African Marais Erasmus from the Western Cape. Koertzen was still a member when he retired.

Umpires from the International Panel, which currently features South Africans Brian Jerling and Johan Cloete, usually officiate in ODIs in their home country.

Koertzen will also interact with visiting umpires to the Africa region, and is expected to play a vital role in the development of budding umpires in Africa through close cooperation with Cricket South Africa and Zimbabwe Cricket, and the ICC Africa regional office.

The ICC’s umpires and referees manager Vince van der Bijl, also a former South African player, said the organisation was looking forward to working with Koertzen in his new role.

“He has umpired through the technology changes of officiating and is the ideal candidate to use all that experience to help the up and coming umpires move forward into the international arena.”

At the close of his distinguished career Koertzen had stood in 108 tests, a record 209 one-day games and 14 Twenty20 games. Only West Indian Steve Bucknor has officiated in more test matches, with 128 appearances to his name.

ICC CE Haroon Lorgat, a South African chartered accountant, paid tribute to Koertzen on his retirement: “He is one of the most highly respected umpires of the game and we wish him the best of luck in his final test. It is somewhat fitting that Rudi’s final appointment before retiring from the Elite Panel is to officiate in the pinnacle of our great sport, test cricket.”

Lorgat added that the council owed a debt of gratitude to Koertzen for his invaluable contribution to the sport as an international umpire.