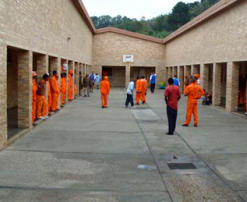 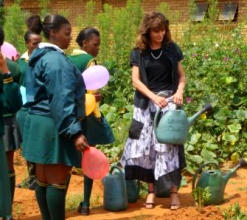 Dynamic Khulisa founder Lesley Ann van Selm has won awards for her organisation and in her personal capacity for her uplifting programmes.
(Image: Khulisa Social Solutions)

Khulisa means “to nurture” in Zulu. And plenty of nurturing has been going on across the country over the past 16 years in Khulisa Social Solutions, a multi-layered intervention and upliftment programme with the slogan Reinventing lives.

“We work with a variety of role-players including corporations, NGOs and the government to co-ordinate and facilitate projects that engage poverty alleviation, crime reduction, victim empowerment, enterprise development and community upliftment,” indicates the website.

Founder and MD Lesley Ann van Selm established the NGO in 1997 and today it has 31 offices nationwide, employing 250. It works in 100 rural areas, and has reached 493 046 people through its multiple programmes in the past year.

Khulisa has won and been shortlisted for numerous social awards, including the Silver Impumelelo Award in 2007; the National Reintegration Award from the South African National Institute for Crime Prevention and the Reintegration of Offenders in 2000; and in 2006, the Gauteng Service Provider of the Year Award from the Department of Correctional Services.

Khulisa has also set up shop in the UK, where it went originally to create a base from which to access funding, but the organisation’s Silence the Violence programme was identified as something that didn’t exist in that country. Khulisa is now an independent entity in the UK, and has been operating as such since 2008.

Inspired to make a difference

Van Selm, who has a marketing and public relations background, has personally won the 2010 Shoprite Checkers Woman of the Year award in the Good Neighbour Category and the 2009 Pinnacle Award as a leading social entrepreneur in Southern Africa. She was shortlisted for the 2012 Annual Reconciliation Award from the Institute for Justice and Reconciliation.

In 2001 she was elected an Ashoka Fellow, a prestigious accolade. Ashoka is a global organisation that supports leading social entrepreneurs, individuals who are making a large-scale impact on society.

In the troubled 1980s Van Selm worked as an entrepreneur in the townships, but in 1986 she went bankrupt. She says of the experience: “I think this is a lesson that every entrepreneur needs to go through because it gives you a gut feeling about things that you never lose.”

After dabbling in advertising, educational television programmes and films, she became involved in storytelling and tied up with the Department of Education in training teachers in the art. This fizzled out but she took the idea to Leeuwkop Prison in north Johannesburg – the concept was to help rehabilitate inmates through storytelling. She says: “That is the day I knew my life would never be the same”.

Van Selm was introduced to 20 young inmates, whom she describes as “the most beautiful young people who responded to the opportunity to listen to a story, to tell their story, to participate, to be creative, to be honest about what had happened and they were so hungry and thirsty – they were hopeless because they had never been given a chance to tell their stories or be creative.”

She says after running the pilot programme in the prison for a week, “it was unthinkable that we wouldn’t come back”.

Van Selm admits to becoming obsessed with her young charges. “The first year I worked with them I came back from my holiday with my entire boot filled with Oros bottles and sea water.” She was requested to bring back sea water because of traditional beliefs that it has healing qualities.

And so Khulisa was born. Originally called Khulisa Crime Prevention Initiative, it has broadened its scope to wider societal issues, changing its name to Khulisa Social Solutions.

Khulisa’s vision is to provide a “safer, healthier and more prosperous South Africa, where all people, especially youth, have access to the information, skills and opportunities they need to contribute to equitable local and national development”.

This will be done by addressing “social vulnerabilities and inequalities by providing support and developmental know-how, through key partnerships, for initiatives at a community level that quantifiably demonstrate social impact”, according to the website.

Over the past year Khulisa has partnered with 188 entities around the country, including the departments of Justice, Correctional Services, Education, Foreign Affairs, Health, Social Development, Community Safety, Housing and Labour.

These departments help fund Khulisa, which is also supported financially by the EU, the Danish, Finnish, American and British governments, the Open Society Foundation, the UN Office on Drugs and Crime, and the US Agency for International Development. Local sponsors are Anglo American, Harmony Gold, Goldfields, BHP Billiton, Liberty Life, Investec Bank, Carlson Wagonlit and DHL, among others.

“Our proven, award-winning programmes provide the intellectual, moral and emotional development that is absent in the lives of many. These interventions effectively break the cycle of violence and crime and result in reinvented individuals becoming part of a ‘pay-it-forward’ social enterprise or community development initiative,” indicates the website.

Khulisa works through three inter-connected business units that focus on crime prevention and access to justice, community and leadership development, and business skills and enterprise development. “By targeting all three areas, Khulisa reinforces behaviour change, primarily by the youth, with opportunities for self-reliance, sustainability and an improved community environment.”

Once they’ve gone through the Khulisa programmes, graduates who demonstrate aptitude are assisted in setting up their micro enterprises, which are developed in partnership with Khulisa or other NGOs working in those particular fields.

Over the past five years, Khulisa has worked in 60 prisons across the country with its HIV/Aids peer education programme, rolling it out to 5 763 offenders. By June 2012 the programme had been introduced to 11 Southern African Development Community countries, by training psychiatrists, medical doctors, human resource practitioners and prison management officers.

Over the past five years only 18% of 287 offenders who have completed the programme have been reincarcerated. The national relapse rate is 85%.

Through the Gateways programme, 66 ex-offenders were given job-shadowing opportunities in 2009, with 83% completing it, and 14% employed full-time by the City of Johannesburg. A survey six months later revealed that 81% of 36 respondents either were employed or studying or volunteering.

The programme has dealt mainly with serious, violent crime and targeted incarcerated, pre- and post-release offenders. The recidivism rate in the country is around 80% while Khulisa’s rate is less than 20%.

A case study done in Phoenix in Durban between 2007 and 2009 revealed that 2 000 cases were successfully mediated by Khulisa, the National Prosecuting Authority and the justice department, leading to a reduction in the court backlog of up to 50%, with 93% of victims saying they would rather go the alternative justice route.

Another case study, done between 2010 and 2012 over six urban, peri-urban and rural sites, saw 88 438 people being reached on the basis of one victim, one perpetrator, with common assault being the most common crime. Across the six sites, 84% of cases were successfully mediated.

Make it Better: The Make it Better (MIB) programme aims to skill youth community leaders. Over 13 years 53 MIB programmes were introduced in seven provinces, training more than 600 people. Over a two-year period each MIB group influenced the lives of around 5 000 young children through peer drug and HIV/Aids education, multiple life skills, sports and recreation, and leadership, among others.

Diversion programme: This programme aims to divert young adults who have committed petty offences out of the criminal justice system, thereby giving them a second chance. This involves apologising to the victims, and getting involved in community outreach programmes, called Ubuntu in Action.

Silence the Violence: Amazing results have been achieved in this programme – from a group of 164 maximum sentence offenders in four correctional facilities, none of them re-offended during a four-year period after participation in the programme. Some 119 became HIV/Aids and Substance Abuse Peer Educators in their correctional facilities, and 23 of them were released and are giving peer education programmes in schools and their communities.

Speak up/tug of war programme: The aim of this programme is to reduce alcohol-related problems among young people, thus empowering them to speak up around substance abuse in their schools and communities. It involves a systemic approach in addressing problems, empowering young people, educators and parents in alcohol-related problems in their communities and schools.

Social enterprise programmes: These programmes have been conducted in schools. In 2012 17 young people from three Soweto schools who participated in the programme over a six-month period, demonstrated a personal growth of 85%.

Training of master trainers: In 2012 over 600 social workers benefited from Khulisa training developed by the organisation for the department of social development’s crime prevention directorate. The overall rating of Khulisa’s service delivery as a result was 85%.

Puppet project: Over a six-month period 27 345 children participated and benefited from puppet shows in 66 schools. This resulted in job creation, where NGOs were established that specialise in communication via puppetry. Human rights awareness was raised among children and their parents, which led to “significant referrals to alternative sources”.

Dr Martin Wright, a respected restorative justice scholar and writer based in the UK, says that while he thinks Khulisa is not perfect, he did form “the impression of a very lively organisation, receptive to new ideas: it makes connections, observing the backgrounds and ramifications of the problems it is trying to tackle; and it has a business-like approach – its board members come from business backgrounds”.

Wright was invited to South Africa in November 2011 by Khulisa to exchange experiences over a two-week period. 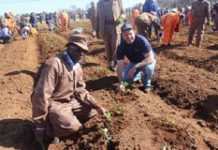 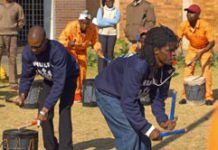 SA-grown social solutions for the UK 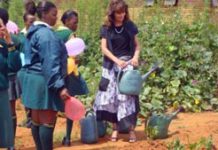 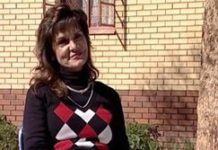