When astronomer Kevin Govender found out he that he had been named as a joint recipient of the 2016 Edinburgh Medal with the International Astronomical Union (IAU), his first thought was that it was a mistake. “It wasn’t supposed to be me,” he said. “I thought it could rather be my colleague, George Miley.”

But mistakes like that don’t happen, and indeed he was the correct candidate. “The moment I convinced myself it was real, it was unbelievable,” the director of the Office of Astronomy for Development (OAD) said thoughtfully.

Govender first heard about his win towards the end of 2015, when he received an email. He immediately dismissed it as spam. But following a call from Prof Ian Wall, who is on the Board of Directors of the Edinburgh Science Festival, during which the award ceremony will take place, things became real. Wall said the board had been keeping an eye on Govender’s work.

It prompted the curious Govender to do further research. “I looked it up,” he explained.

The medal itself is made of sterling silver and features the original Edinburgh International Science Festival logo – a juggler performing with different symbols of science.

Following the announcement, the influx of congratulatory messages came in droves. “I was swamped with well wishes.” He laughed when he said he still needed to respond to each of them. In order to satisfy the scrutiny, he took to his blog because “all the attention had left me rather speechless so far. I’ve barely managed to click ‘like’ on people’s comments to acknowledge their congratulatory nature”.

In his post, he acknowledged his colleagues for their efforts in the OAD, he explained his hesitance in having the spotlight on him, and he thanked everyone for their support.

“So thank you, my dear friends from near and far for all the well-wishes and congratulatory messages,” he wrote. “I accept them humbly with much appreciation and respect, and with the hope that this opportunity will provide a strong boost for the work that we do on this global initiative.”

Govender will attend the awards ceremony on 30 March and will give a talk as well. It takes place during the 2016 Edinburgh International Science Festival. Because he is a science enthusiast, he said, he was most excited to attend the festival. He had completed his term at South Africa’s national science festival, Scifest Africa, and was keen to see the Scottish event.

Receiving the medal was very important for South Africa, Govender added. “The award being given to a South African shows the global position of the country as a leader in astronomy in the developing world.” Having the main office of the OAD in South Africa, with nine regional offices around the world, further solidified South Africa’s leadership role.

Govender’s love for science came from his parents, whom he described as a “special combination”. His mother was a teacher and his father a motor mechanic. “I grew up with a love for reading and learning how things worked.”

If something went wrong in the Govender household, they fixed it themselves. It formed the basis for science – learning how the world and the universe worked. “When I was in high school, I used to read the science text books of the standard above me because [they were] more interesting,” he revealed. “The teachers supported me.”

He and his fellow science enthusiasts formed science clubs to help younger children think about science, which continued throughout university. At his first job at the South African Nuclear Energy Corporation (Necsa), he became involved in science outreach projects and got sponsorship from the company.

As yet, he has no idea where he will place the medal. “We’ll probably put it on display in the office,” he mused. “We have things on display from all our travels.

“This medal gives a level of credibility to the work we do. And we have many affluent people passing through the office – they can then see the recognition.”

Through his work, Govender has had to travel to many countries, so much so that his passport has run out of pages to be stamped. Highlights have been getting to know people all over the world and experiencing a wide range of cultures.

But his ultimate highlight has been having two children with wife, Carolina Odman. “We’ve had two boys, one is two years old and the other four years old, and that has kept me sane. It gives perspective to the work we are doing.”

Govender was appointed the OAD’s director in 2011. He was previously part of a tiny delegation that successfully lobbied the United Nations to declare 2009 the International Year of Astronomy (IYA2009); he chaired the Developing Astronomy Globally Cornerstone Project in the same year.

He was included in the Mail & Guardian’s Top 200 Young South Africans, and received the National Science and Technology Forum’s Science Communicator award in 2011.

He reiterated that the field of astronomy gave us the perspective we needed to change the world. “It opens and broadens our minds, it makes us realise what is, and what isn’t important.” 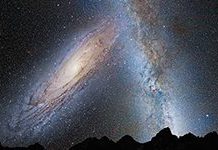