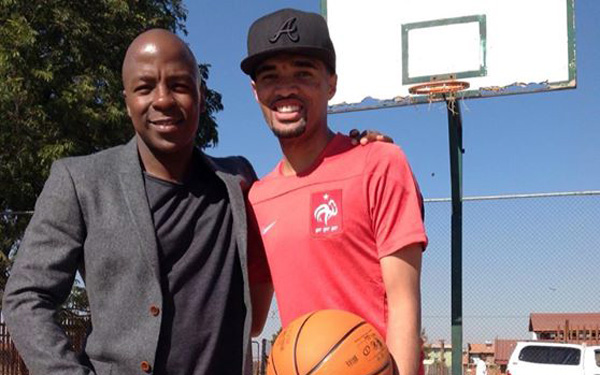 Jerome “Slim” Du Plooy and Play your Part TV series host, Kabelo Mabalane, getting to know each other on the basketball court. (Image: Jerome Du Plooy)

• Getting Africa’s youngsters moving
• Transforming lives through sport
• A SKY light for Soweto kids
• Arts, culture and democracy on Play Your Part TV
• Beukes has a head for hoarding

Jerome “Slim” Du Plooy’s journey from the streets of Kliptown to appearing on television around the world is one that can and should inspire and motivate young South Africans to pursue their dreams regardless of where they are and the circumstances in which they live.

Growing up in the poor Soweto suburb, the television and radio personality lived in a one room house with his mother. The two went without electricity for the better part of 16 years, but the light was never switched off on Du Plooy’s aspirations.

“When you come up the way I came up, you’re tempted by a lot of things,” Du Plooy says, explaining the difficulties and challenges he faced growing up. “You’re surrounded by people who sell drugs, you’re surrounded by poverty and you have to decide what you want to do, if you want to be different, and I chose to be different… You’ve got to keep positive and follow positive people; that way you avoid all of the negativity going around.”

Fire in his eyes

As a member of Soweto Kliptown Youth (SKY), a non-governmental organisation that provides an array of services and support to neighbourhood children, Du Plooy caught the attention of NBA Africa while playing basketball for the SKY basketball team.

After noticing the drive and charisma of the young Du Plooy, NBA Africa took him under its wing and made it possible for him to study at Boston Media House. The basketball organisation’s investment in him would, in time, turn out to be of great benefit to Du Plooy and NBA Africa as the former came into his own and thrived in his new life on campus.

“It was in 2005 that I met the NBA. The NBA saw something in me and ever since then they’ve adopted me,” he says.

Having been given the opportunity to chase his dream, Du Plooy worked hard to make the most of his position and the support structures he had in place. Today, he is a sought-after MC, actor, radio and television personality as well as a motivational speaker with a silver tongue and a great hunger for life.

He has represented South Africa on the NBA’s Basketball Without Borders programme, where he rubbed shoulder with some of the biggest names in basketball, such as Dwight Howard, Kyrie Irving and Carmelo Anthony.

Basketball Without Borders is the global basketball development and scouting programme run by NBA and FIBA. It has reached more than 1 700 players from more than 120 countries, and 28 of the programme players have been drafted into the NBA.

Du Plooy was the MC at the NBA All-Star Jam Session at the Orange County Convention Centre in Orlando, in the United States in February 2012 and has featured on the annual Basketball Without Borders programmes in Africa since 2009. “Seeing guys like Dwight Howard and Kyrie Irving going out of their way to help people less fortunate than them is part of the reason why I strive to be better.”

Today’s youth are “living in a good era right now with a lot of opportunities”, he says. “I think that the youth need to step up and take advantage of these. You can’t afford to be lazy and expect the world to spoon-feed you.”

In 2011, he started his Slim Cares organisation, through which he has made a difference to the lives of a number of youths in Soweto, Johannesburg. “I have always wanted to give back but I had to wait until such a time that I was in the position to do so. I was one of the few who made it, and when you make it, you make it for all of us,” he says.

“Do what makes you happy,” he continues, “a lot of rich people are poor because they only have money.”

He looks to play his part in ensuring that youth from underprivileged backgrounds don’t have to struggle the way he did. Since founding the initiative he has fed and clothed hundreds of children living in the south of Johannesburg. Slim Cares has partnered with a number of different organisations, such as Boston City Campus and the Sunday School Foundation on its initiatives.

“Giving back is key,” says Du Plooy. “You have to be a blessing to others. I don’t give back because I have much, but because I know what it’s like growing up with nothing. I didn’t want these kids to grow up this way, which is why I started Slim Cares, which was inspired by the NBA.”

Du Plooy’s story is a classic case of an ordinary person doing extraordinary things and goes to show that nothing is impossible if you have the drive and dedication to see it through. Catch Jerome “Slim” Du Plooy on the fourth episode of Brand South Africa’s Play Your Part TV series, to air on SABC2 on Sunday, 6 July at 9pm.