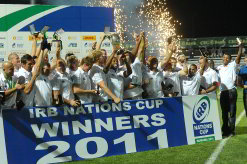 The victorious South African Kings have
lived up to the country’s continuing
dominance in international rugby. 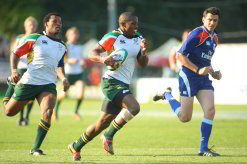 It was their first tour abroad, and they did not come home empty-handed. On their way to winning the 2011 International Rugby Board (IRB) Nations Cup, the South African Kings remained undefeated throughout the tournament and ended top of the table with 13 points.

Their opening game was an emphatic 31-17 triumph against a tough Georgian squad and their final match ended in just as sweet a victory when they trounced a wilting Portuguese side 39-12.

“Like all teams participating in the competition we came here aiming to win,” said head coach Alan Solomons. He said that some of the players had never travelled overseas before, and that overall it was a rewarding experience for everyone.

The South African Kings replaced the Emerging Springboks, who won the 2007 and 2008 tournaments, as the country’s representatives at the 2011 IRB Nations Cup, held in Bucharest, Romania.

The entire 27-man team for this year, except for one player, was drawn from the Eastern Province Kings franchise, which makes its base at the multipurpose Nelson Mandela Bay Stadium in Port Elizabeth.

Second and third place winners of the 2011 tournament were Georgia and Argentina. Georgia beat Namibia to finish second and the Jaguars beat Romania, coming in third place.

The win at the Arcul de Triumf Stadium in Bucharest was not an easy one. Both sides struggled in the heat, and the Kings missed the presence of their eighth man Luke Watson, who was taken ill.

But when the final whistle blew it was the Kings that emerged victorious, thanks to a solid team performance.

A brace of tries from front row men, Namibian-born Jaco Engels and New Zealander Clint Newland, in the first half gave them the edge straight away. Their opponents fought back, with second rowers Eduardo Acosta and Juan Severino each diving over the try-line.

It was, however, the third South African try by blindside flanker Jacques Potgieter that put the Kings back in the lead. In a first for the tournament since the inaugural event in 2006, Potgieter’s effort also took the total points scored in IRB Nations Cup games past 2 000.

In the second half the men in South African colours pressed on ruthlessly, with centre Siyanda Grey, an experienced Sevens player, scoring two well-deserved tries. He took his personal total for the tournament to six, the highest not only for this year, but in IRB Nations Cup history.

Although they tried their best to regain control, the side from Portugal were unable to prevent the game from slipping away from them. Portuguese coach Errol Brain, a former All Black player, admitted that his boys had gone off track in the second half.

“We started to ignore the game plan, which we adhered to in the first half, and started to run laterally instead of running straight.”

Brain added that the heat had sapped his players’ strength, and there were a couple of silly mistakes, but conceded that the best team won on the day.

Kings captain and Sevens veteran Mzwandile Stick, thrilled at the win, stated that the team had wobbled in the first half, but a pep talk at half time had given them fresh inspiration.

Delighted for his team, Stick said: “It was very hot and this was a very intense, physical tournament.”

The IRB Nations Cup, which is regarded as important preparation for the Rugby World Cup, kicked off in 2006. The inaugural tournament was held in Lisbon and was won by Argentina’s A team, also known as the Jaguars.

The tournament is one of several held by the world rugby body as part of its international strategic investment programme. It gives top tier A sides that extra bit of competition, and also provides more opportunities for emerging second and third tier nations, such as Georgia, Namibia, Romania, Russia and Portugal. The tournament is held annually and comprises six teams.