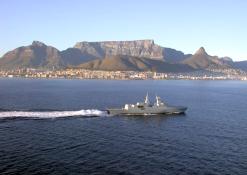 South Africa will host 32 member states of the Indian Ocean Naval Symposium (IONS) and various international parties with interests in these waters when the third such event takes place in Cape Town in April 2012.

The South African Navy also assumes the chair of the IONS this year, a position it will hold for the next two years.

Held every two years since 2008, the inaugural event took place in New Delhi, India, followed by the second in Abu Dhabi in 2010.

Vice-Admiral Refiloe Mudimu, the chief of the South African Navy, is expected to welcome about 30 of his peers, as well as coast guards and maritime agencies, while President Jacob Zuma will deliver the keynote address at the opening on 11 April.

“The objective of IONS 2012 is to promote constructive engagement and dialogue in order to enhance maritime security in the Indian Ocean and to promote areas of common interest and co-operation amongst member states,” says navy spokesperson Commander Prince Tshabalala.

This year’s theme – Regional Maritime Security Initiatives aimed at reducing Modern Maritime Security Threats – is particularly relevant as acts of piracy are becoming commonplace around the Horn of Africa and the continent’s east coast.

These attacks are a growing concern not only for IONS member states but also for the rest of the world.

“To encourage greater participation and dialogue on the pressing issue of maritime security, this year’s IONS has extended full participation to all nation states with permanently held territory which abuts or lies within the Indian Ocean and which maintain a navy or maritime agency,” says Tshabalala.

Countries without territory abutting or lying within the Indian Ocean, but with significant strategic interest in the region, NGOs, academia and others involved in maritime issues will receive observer status and will also be invited.

The symposium hopes to promote a shared understanding among these states on maritime security issues and in so doing, develop strategies for cooperation which will improve security in the long run. It is hoped that a variety of multinational maritime cooperative agreements and strategies will follow from the event.

Humanitarian assistance and disaster relief throughout the Indian Ocean region will also be on the agenda.

The recent signing of a memorandum of understanding between Tanzania, Mozambique and South Africa on maritime security cooperation sees the formalising of ties and activities which already commenced about a year ago.

Signed by Lindiwe Sisulu, South Africa’s minister of defence, Tanzania’s defence minister Hussein Ali Mwinyi and the Mozambican minister of national defence Felipe Nyusi in Dar-es-Salaam, the agreement will ensure security and the free flow of goods along the east coast of Africa from Tanzania, past Mozambique, and down to South Africa.

In February 2011, the South African Department of Defence received a Cabinet mandate to develop a maritime security strategy following an incident of piracy in Mozambican waters. The strategy was approved by Cabinet and in July 2011 President Jacob Zuma authorised the South African National Defence Force (SANDF) to assist in combating piracy and other maritime crimes off the east coast.

The South African Navy has been patrolling the northern coastline of Mozambique waters since the beginning of 2011 and its presence has improved maritime security in these waters considerably, says Tshabalala.

Under Operation Copper, which operates out of the port city of Pemba, the navy has deployed three frigates on a rotation basis to enhance the security of the Mozambican channel. Currently the frigate SAS Isandlwana is active in the channel, having relieved the SAS Mendi in December.

However, according to navy sources, the SAS Isandlwana will return to South African waters at the end of March because a memorandum of understanding, signed in December between South Africa and Mozambique in terms of South Africa’s help with anti-piracy patrols, is not yet in place. Once this is finalised the South African navy will again take up the patrol in the Mozambican channel.

The need for naval collaboration first became apparent when in December 2010 Somali pirates struck further south than they ever had before, and hijacked a Spanish fishing trawler in northern Mozambican waters.

“Since the start of the joint maritime security patrol, no piracy activities have been reported in the area of operations,” says Tshabalala. “By all accounts the local Mozambican fisherman and seafarers have indicated that they are now proceeding to sea safely under the blanket of security provided by our navy”.

Incidents of piracy have reached such worrying proportions in the Indian Ocean that the EU has joined the fray.

A dedicated naval patrolling force, the European Naval Force Somalia‘s Operation Atalanta, took to the waters in 2008 to protect vessels and help with the deterrence of piracy in this region.

IONS membership is voluntary and is open to coastal states of the Indian Ocean region which have navies.

This year’s symposium takes place at the Cape Town International Convention Centre from 11 to 13 April 2012. A highlight of the event is the closing gala concert featuring the acclaimed South African Navy Band.