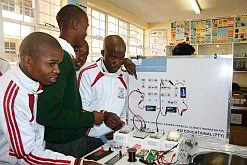 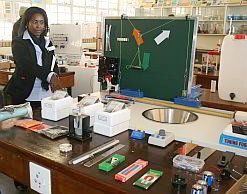 Siemens’ Emily Molefe urged the school
to use the tools. 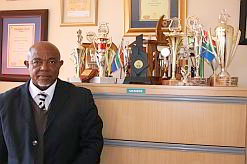 Theoretical chemistry tutorials are now a thing of the past at Ingqayizivele high school in Tembisa, east of Johannesburg, thanks to a donation of lab equipment that will enable pupils to grasp concepts through much-needed practical work.

The R200 000 (US$29 000) worth of apparatus donated by Siemens will enhance learning for Ingqayizivele’s grade eight to 12 science pupils. The lab was officially opened on Mandela Day on 18 July 2011, as part of the celebrations for the former president’s birthday.

Until recently Ingqayizivele, like many public schools in the country, relied solely on theory-based tutorials for chemistry and physics – subjects that are better taught through demonstrations and experiments.

Youngsters from rural and township schools often only get exposed to practical science at tertiary level.

“Science is based on practical work, so the equipment will make it easier for us as teachers,” said the school’s Paul Mokgabudi.

“When I talk of potassium, the learners must know exactly what I’m talking about,” he added.

The lab’s tools were manufactured by East Rand-based Africa Scientific Instrumentation. The company’s Reiney Mahadaven pointed out that they are not “micro-science toys”, but large demonstration apparatus tailor-made for advanced chemistry and physical science education.

“Our main aim is to mould the learners to go into science and technology fields,” Mahadaven said.

“Now that you have apparatus you’ll be able to do experiments. Your creativity is going to be enhanced,” principal Cass Sehloho told the science pupils.

As part of its Generation 21 Programme, Siemens South Africa is aiming to improve learning and teaching of mathematics and science – “subjects which are critical to our country”, said the company’s corporate social responsibility manager Emily Molefe.

The donation ties in with the government’s call for the private sector to partner with state schools to improve their quality of education.

Since 2008 Siemens has invested more than R2-million ($287 000) in Ingqayizivele to help develop the school.

An information technology room with 20 computers was their first project, and they also replaced old computers in the principal and administrators’ offices.

The CCTV surveillance system installed by the company has improved the school’s security, said Sehloho.

The school’s matric pass rate hit a historical high of 94.8% in 2010, a vast change from 2009’s 68.8%. It was the most improved school in the Gauteng Education Secondary School Improvement Programme, which is designed to boost poor-performing public schools. As many as 64 schools were targeted in 2010.

Maths and science results in particular have improved drastically at Ingqayizivele. While 54% of the matriculants passed maths in 2009, the average shot up to 83% in 2010. The pass average for science grew from 51% to 83.3% in the same period.

A 100% matric pass rate is now within sight, Sehloho said. “We are not sitting on our laurels.”

Ingqayizivele has been recognised with a number of awards for its performance over the last two years. In addition to being the most improved school in the Secondary School Improvement Programme, it was rated as one of Ekurhuleni’s top township schools in 2010.

Such achievements have given both pupils and the community trust in the school.

“Students are now studying in an environment that gives them hope,” Sehloho said. “When you get support, your thoughts break all the bonds, you start to think differently.”

Sehloho himself has been recognised for the school’s turnaround. He received Lifetime Achievement Awards from the provincial and national government in 2010.

“It (the Siemens involvement) also gave me hope and I was able to achieve certain things on a personal level,” he said. “Our educators themselves have been scooping awards.”

Sehloho believes the launch of the Bill of Responsibilities by the Department of Basic Education and Lead SA took place at Ingqayizivele in March 2011 in “recognition of the work that happens at this school”.