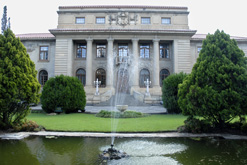 The Zwelitsha Magistrate’s Court in the Eastern Cape recently joined the ranks of other indigenous language courts in South Africa when it committed itself to hearing cases in isiXhosa.

English and Afrikaans have always been dominant languages in the courtroom, often at the expense of South Africa’s other official languages. The practical difficulties of using all 11 languages in court have in the past been offered as an excuse for the continued use of English.

Now KwaZulu-Natal, the Western Cape and Limpopo are the leading provinces to introduce indigenous language courts in the country. The first indigenous language court at Msinga in KwaZulu-Natal has been operating since the beginning of March. In Mitchell’s Plain in the Western Cape a court is hearing cases in Afrikaans and in Khayelitsha isiXhosa is used. In Limpopo a court in Sekhukhune is hearing cases in Sepedi.

Professor Hennie van Coller, head of the Afrikaans Department at the University of the Free State, commended the justice system for introducing indigenous language courts.

“Using a language in a court is one of the most important and effective ways to keep a language alive and restore its status,” he said.

Department of Justice spokesperson Zolile Nqayi said the new language policy is twofold: to develop a culture of understanding, tolerance and dialogue in courts and to improve the delivery of justice. Many courts have significant backlogs and hearing cases in indigenous languages will hopefully speed up cases.

Nqayi said that where one of the parties in an indigenous language court did not speak the language, the case would be heard in English. But in places like Zwelitsha, where 90% of the population including the magistrate and all court officials speak isiXhosa, the language policy has helped speed up the wheels of justice.

Research has indicated that the use of interpreters can also lengthen court proceedings. In diverse communities such as Hillbrow, some cases can be conducted in four languages. In such cases every word by witnesses, accused persons, magistrates and attorneys must be translated four times.

Interpreters may also get in the way of justice. Van Coller said the use of interpreters can often be harmful to cases as the accounts of the accused or witnesses are often loosely translated and not accurate.

“There is a real need for good translation services,” he said. “Translators need good training to understand and interpret legal jargon. This is a very specific skill.”

Julia Mabjana from the Wits Language School added that South African businesses and tertiary institutions are also making an effort to promote the use of other languages. Many companies are sponsoring staff members to learn an indigenous language. At most tertiary institutions staff members are encouraged to learn the indigenous language of the area.

Mabjana added that many provincial government departments’ employees are learning sign language. “This has made it possible to offer a much better service to the deaf community,” she said.