Nature conversationist and activist Dr Ian Player died at his home in the Karkloof Valley in KwaZulu-Natal on Sunday. He was 87.

Player passed away peacefully after a short illness, the Wilderness Foundation said in a statement on Sunday. He died at his home surrounded by his family after suffering a stroke the week before, the foundation said.

In a life committed to conservation, Player founded several environmental organisations, including the Wilderness Foundation, and was deeply involved in rhino conservation.

“Despite physical challenges that hounded him all his life, Ian worked tirelessly, fully committed to his life’s work of nature conservation and his quest to understand the human spirit and psyche,” the statement said.

He spearheaded a campaign in the 1950s that is widely regarded as being instrumental in rescuing the Southern White rhino from extinction. Player led South Africa’s first Operation Rhino in the then iMfolozi Game reserve in the 1960s

Earlier this year, Player implored youth leaders to take over the baton: “You have to ensure that ancient animals like the rhino continue to survive, so that your grandchildren will be able to see them too,” he said.

“We conservationists have done our duty to God and the animals. We now hand over the responsibility to you.”

On Sunday, President Jacob Zuma has conveyed his condolences to Player’s family.

“Dr Player played a significant role in the preservation of nature. His name is synonymous with conservation and the preservation of the environment for future generations. He did exceptionally well in this field, consistently, for decades, and managed to put South Africa on the map.

His passing is a great loss for the nation and for the nature conservation community worldwide. We extend our deepest condolences to his family, colleagues and friends in this country and all over the world,” Zuma said.

Player’s achievements in the conservation field could not be beaten, Environmental Affairs Minister Edna Molewa said in a statement on Sunday.

“We owe it to him to ensure that we do not allow the current onslaught on our rhino to succeed,” said Molewa.

This year, South Africa recorded the worst poaching year on record, with more than 1 020 rhinos killed for their horns.

Player also founded the Dusi Canoe Marathon in 1951, a 120km canoe race between Pietermaritzburg and Durban, which now attracts thousands of competitors each year.

Player, the brother of golfer Gary, is survived by his wife and three children. 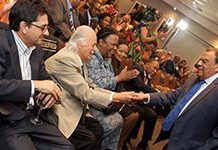