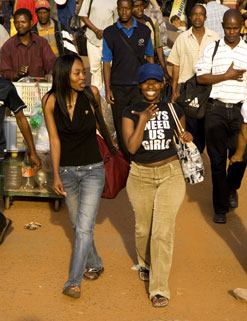 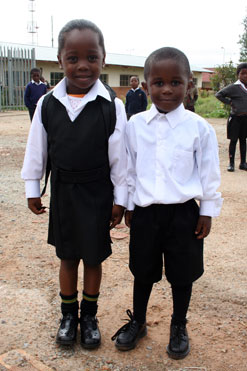 The first day of school. 97.5% of
children between seven and 15 years of
age attend an educational institute in
2007, compared with 96.5% in 2002.
(Image: Emily Venter, City of Joburg. For
more photos, visit the image library.)

The results of the annual general household survey, compiled by Statistics South Africa (Stats SA), the country’s national statistics board, have been released. The survey was established to provide data on the level of development in the country in terms of living conditions in South African homes and the quality of service delivery in key sectors.

Stats SA has conducted a general household survey annually since 2002.

The survey collects data and reports on a range of topics including education, access to and quality of healthcare, the labour market, dwellings, access to services and facilities such as water and electricity, means and availability of transport, and quality of life.

Fieldwork was conducted by 784 trained staff and 260 supervisors and coordinators who visited over 34 000 homes across the country to conduct face-to-face interviews. A total of 29 311 interviews were successfully concluded. This is equivalent to 84% of all homes visited, a decrease of 2% from the 86% response in 2006. Reasons for unsuccessful interviews include refusals, absenteeism, vacant homes, or homes that had been converted into shops or small businesses but were still listed as dwellings.

The 2007 general household survey revealed that the population increased from 45.5-million to 47.9-million in the five years between July 2002 and July 2007.

The percentage of people between the ages of seven and 15 who are attending school increased from 96.5% in 2002 to 97.9% in 2007. The most common reason for not being in school was an inability to pay the fees.

The second most common reason, given by 19.3% of interviewees, is employment, while 8.7% mentioned family commitments and 7.8% regarded education as useless or unimportant.

The national Department of Education’s drive to boost enrolment at pre-school level and promote access to Early Childhood Development programmes is showing results, with 16.6% of children up to four years old attending an educational institute, compared to 7.6% in 2002. The percentage of five-year-olds at school increased from 40,1% in 2002 to 60,4% in 2007, and the percentage of six-year-olds receiving schooling also increased from 70% to 87,7%. The age group from birth to nine years is specifically targeted by the education department.

Just 9.8% of the population over 20 have completed some tertiary education, although this figure is 0.7% higher than in 2002.

In the month preceding the survey – June 2007 – just 11.1% of people were ill or injured and of these 79.7% sought professional help, while 73.2% of those who were ill and did not seek help said it was not necessary. Other reasons for not seeking help were the expense of healthcare, followed by distance to the health worker.

In specific sectors, the construction, trade and service industries have grown the most in terms of the absolute number of people employed. The trade industry has also gained the largest number of skilled individuals, from 12.7% in 2002 to 17.7% in 2007.

Of all those employed, 163 000 are over the age of 65, and these individuals work mainly in the services, trade and agricultural sectors.

More households have access to electricity, with 76.1% in 2002 compared to 81.5% in 2007. The Eastern Cape, KwaZulu-Natal and Gauteng provinces have the lowest levels of electricity access, but the Eastern Cape, along with Limpopo, reports the biggest increase in the percentage of households that are connected.

Access to piped or tap water, whether on- or off-site, has also increased in a number of provinces, notably the Eastern Cape, KwaZulu-Natal and Limpopo. Water access is lowest in the Eastern Cape. The majority of those who receive piped water from their municipality gave a positive rating for the service.

Fewer households were affected by hunger, with a decline in percentages of afflicted adults and children from 6.9% to 2% and from 6.7% to 2% respectively.

The complete general household survey for 2007, as well as those dating back to 2002, can be downloaded from the Stats SA website.