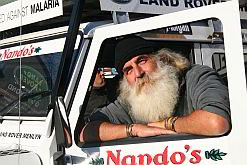 South African explorer Kingsley Holgate
and his team are travelling to South
Sudan by road. 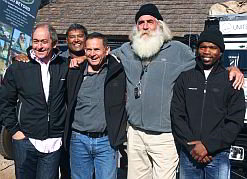 Holgate is travelling with 11 other local
explorers. The team includes his family
members. 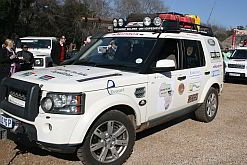 South African explorer Kingsley Holgate is back on the road for an ultra-long expedition, this time to boost malaria-prevention efforts in South Sudan and wish the new nation well as it celebrates independence on 9 July 2011.

Holgate and his team, comprising 11 other local explorers, left South Africa at about 10am on 21 June. They departed from the Lesedi Cultural Village, a tourist site outside Johannesburg, for their trip called “A Journey to Juba”.

The volunteering dozen, which includes some of Holgate’s family members, will reach South Sudan just in time for its 9 July celebrations, when the region officially secedes from the Khartoum-based government.

“It’s a goodwill exploration to South Sudan to wish them well on their new democracy,” said Holgate, whose team will spend at least 60 days on the road.

The team, travelling in three sponsored Land Rovers, will distribute mosquito nets to pregnant women and children when they get to South Sudan. The life-saving nets were supplied by the Global Fund to Fight Aids, Tuberculosis and Malaria.

They will not just “dump” nets in the rural areas, Holgate said, but instead spend time with locals to give their mission a greater sense of dignity. “It’s great to get to villages far from the city, far from regular health services,” he said.

The Durban-born Holgate is a staunch activist of United Against Malaria (UAM), a global campaign that seeks to raise awareness of the disease and get authorities to commit to end it. UAM gained particular momentum during the 2010 Fifa World Cup held in South Africa.

The United Nations Development Programme (UNDP) estimates that up to 70% of the Sudanese population live in vulnerable areas and are at risk to malaria. In its March 2010 publication, UNDP said “malaria is hyper-endemic and holoendemic” in the southern region.

In addition to distributing nets, the explorers will work hard to raise awareness about the prevalence of malaria. Holgate said part of their aim is to “bring home the message that we have a serious disease in Africa that needs attention”.

The mosquito-borne infectious disease is most prevalent in Africa, although cases are also reported in Central and South America, Southeast Asia, Haiti and the Dominican Republic, the Middle East and the Pacific Islands.

At least 11 African countries have managed to halve the incidence of confirmed malaria cases and deaths since 2000.

According to UAM, it costs just $10 (R67) to buy a mosquito net to protect a mother and child from contracting malaria for up to five years.

“The thing with malaria is that it’s an African issue. It has to be solved by Africans,” said Robert Brozin, founder and CEO of Nando’s, one of the companies sponsoring the expedition.

The travellers are also taking 300 pairs of prescription spectacles with them to Juba to donate to locals.

An additional six members of Holgate’s adventure team have had to pull out due to security concerns. Fighting was under way in Abyei, an oil-rich town that straddles Sudan’s north and south regions, until warring sides signed a ceasefire agreement on 20 June.

The Khartoum-based government agreed to pull out its army from the contested Abyei, but a lasting resolution lies on the determination of the geographic location of the town. The fighting that intensified in early May resulted in about 100 000 residents being displaced.

Having criss-crossed the continent for over 30 years and gone to some of the war hotspots, Holgate is not let down by the situation in Africa’s new nation.

Advocate Sivu Maqungo, South Africa’s Department of International Relations and Cooperation’s chief director in East Africa, assured the explorers that Juba, the south’s capital, is peaceful and “everyone is excited” about the upcoming celebrations.

The department recognised Holgate and the team as good ambassadors of South Africa, and vowed that its staff will be in Juba to receive them.

“We need more of what you are doing,” Maqungo told the explorers. “It’s not just about the nets, but the awareness that you putting out there. We’re proud to be associated with you.”

South Africa has trained about 1 500 civil servants in South Sudan to equip them for running the government, according to Maqungo.

Holgate’s team will not be the only South African group to attend the new nation’s celebrations, as government officials – including President Jacob Zuma – will also be there.

Former South African president Thabo Mbeki, one of the chief negotiators in Sudan’s conflict resolution efforts, is expected to be one of the dignitaries attending.

“The exploration is of great importance. It’s the first exploration from South Africa to South Sudan,” said Holgate, who is also a celebrated humanitarian and author.