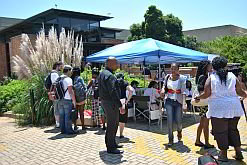 Health Minister Aaron Motsoaledi has launched a campaign to encourage university students to get tested for HIV/Aids.

Speaking at the launch of the campaign on 14 February 2011 at the University of the Witwatersrand’s (Wits) Medical School, Motsoaledi said: “We chose to reach out to students as they are our future leaders who can enable positive change in society. Through this campaign students will know their status and they will be responsible for their behaviour and that of their peers.”

First-year Wits student Tebogo Mokoena said he thinks the campaign is a scary, yet necessary move. “It’s important for us to know our status, especially as young people chasing our dreams of becoming future role-models. We should protect ourselves from infection, therefore protecting our dreams, and the future of this country. It’s a scary reality though, but with the help of counsellors and the information provided, I’m sure we’ll all be fine. ”

The campaign will be rolled out at the majority of universities around the country over the first quarter of the year. Testing stations were set up on campuses at the beginning of the week as universities began their five days of orientation for first-year students.

The campaign will place a strong focus on first-year students, who are believed to be among those at greatest risk of becoming infected. Motsoaledi said he hopes the programme will become an annual feature of orientation week at universities.

“Getting tested is only one of nine HIV-preventative measures, but is arguably one of the most important,” he said.

The testing campaign is a collaboration between the private and public sector, involving Innovative Medicines of South Africa, the South African National Aids Council, the Department of Higher Education and the US President’s Emergency Plan for Aids Relief.

Innovative Medicines chief executive Val Beaumont said 250 counsellors nationwide had been trained for the challenging task ahead. “This is the most ambitious programme in the world. We hope to meet a large number of people by June. We hope that this will have lasting impact and ensure behavioural changes in students.”

He added that students who get tested will be asked to sign a pledge that says: “We, the class of 2011, pledge to know our status, to stop the HIV/Aids stigma and to contribute to the struggle against HIV/Aids.”

Those who get tested and sign the pledge will be entered into a competition to win a Toyota Yaris.

“This will drive a lot of students, including myself, to go and get tested,” said Dominic Peterson – a first-year student at Wits. “Whether we’re going there to win the car or not, the great thing is they’ve got our attention, and we are doing something very brave and taking responsibility for ourselves by testing.”

Thabiso Myeza, a second-year student at the University of Johannesburg, agrees: “Young people make up a large percentage of HIV-positive people in our country. It’s a great step for the government to come to universities, which are filled with the young, and encourage us to get tested. Using an incentive is an even smarter way of getting us all to be responsible. With university students, you sometimes have to give them something to draw them near.”

According to the minister of health, South Africa is battling one of the most severe HIV/Aids epidemics in the world, with an estimated 5.7-million people living with the virus.

In April 2010 the government launched a massive HIV-testing and counselling drive aimed at getting 15-million South Africans tested by June 2011.

The main objectives of that campaign are to encourage South Africans to know their HIV status; to equip those who test HIV-negative with ways of ensuring that they do not become infected; to promote health-seeking behaviour; and to create a quick and easy entry point to accessing wellness and treatment services for those who test HIV-positive.

Motsoaledi said the on-going programme was progressing well. “We have now reached close to 6-million people.”

He urged South Africans to continue testing and to see it as part of their lifestyle. “It would be a mistake for South Africans to think it’s a once-off thing. It is a life-long thing … you have to just keep on testing.”