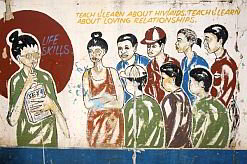 Schoolteacher Thembokuhle Sithole
believes, students need to be taught
about HIV early, as there is a growing
number of teenagers who were either
infected as babies or born with HIV, that
now need to start taking medication.
(Image: MediaClubSouthAfrica.com. For
more free images, visit the image library)

Thembokuhle Sithole, a primary school teacher from Esikhawini in KwaZulu-Natal, is determined to equip his young pupils with vital knowledge about HIV/Aids before it’s too late.

“Every weekend we attend a funeral where another young person is being laid to rest after battling a long illness – 99% of the time it’s an HIV/Aids-related illness,” said Sithole.

“It’s important for us to start teaching students from a young age about HIV/Aids. The reality is some of them have lost their parents, uncles and siblings to the virus. Some are HIV-positive themselves. Many come to school after the weekend and ask us teachers what Aids is. They see the funerals too and want to know why their families are dying and why so many people in the community are sick.”

Sithole uses games and plays to teach the children about how a person can get HIV/Aids, how people can protect themselves from it, and how a person can live a healthy, happy and long life even after they test HIV-positive.

“I try and encourage the children not to fear HIV/Aids, or associate it with promiscuity or death, but to see it as a challenge that one can rise above. I teach them the importance of being careful when they are exposed to blood, when they are playing or even at home with their siblings or other adults. I also teach them the importance of being responsible adults when they grow up, to test for HIV/Aids and to protect themselves from it.”

The pupils Sithole teaches range in age from seven to 13. Most have heard of HIV, but are not too certain about what it actually is. “I know HIV makes people terribly sick and they need to take medication to fight it,” said 10-year-old Mxolisi Ngcobo.

“Mr Sithole has been teaching us to not be mean to some of the children at school who have to take medication to protect themselves from getting sick, but to support them, remind them to eat healthily and to take their medication. He also taught us to be careful when we play and not touch each other’s blood or cuts.”

Thandeka Mwelasa, a mother of one of Sithole’s pupils, said she is grateful that he teaches the children about HIV in such a tender way. “My child used to get sick a lot and I was worried he may be HIV-positive. But I didn’t know how to tell him and was worried about how the other children at school would treat him if he did test positive.”

Mwelasa said that with the help of Sithole, she found the strength to get her son tested and when she found out he was positive, the teacher helped her tell her son.

“Mr Sithole helped me talk to my son and make him understand what it meant to be HIV-positive, and how his life would change now that he had to start taking medication. I cannot thank him enough for his support and wisdom in helping me handle the tough challenge of having to teach my young son about such a complex disease. ”

According to Sithole, there is a growing number of teenagers who were either infected as babies or born with HIV, and they now need to start taking medication. “It’s hard to ignore the importance of teaching them about the disease and the importance of taking care of themselves.

“They may be in primary school now, but many of them will be in high school soon, their hormones will start having an effect and they need to be well equipped with information and tools to be responsible about their sexuality and their HIV status. If we as a country are going to stop the surge of HIV, we need to start talking to children from a young age about the virus and how it affects their lives.”

Mwelase agrees: “My son is 13 years old and the truth is we don’t know when our children really start having sex. If we hadn’t have spoken to him about HIV and his status, it would only have been a matter of time before he would have started being sexually active and infected his peers, making it hard to contain the growing number of infections.”

“It’s important that we are open to our young children in order to protect them. We can’t just wait for them to be in high school or varsity before we introduce them to the reality of HIV. It might just be too late.”