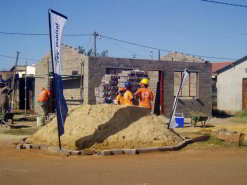 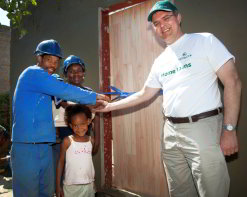 The Blitz Build is a joint project of the South African chapter of the global humanitarian NGO Habitat for Humanity (HFH), the national Department of Human Settlements and a number of private companies.

With an initial target of 50 houses in total, the building project took place from 3 to 7 October in Orange Farm in Gauteng province, Mfuleni in the Western Cape and Umbumbulu in Kwa-Zulu Natal.

They were assisted by professional builders, who ensured that the houses went up within the allotted time, and were of an acceptable standard.

The event coincided with World Habitat Day, which this year fell on 3 October. In 1985 the UN declared that the first Monday of October each year should be set aside as a day of reflection on the need for adequate housing for all.

In recognition of the work done by HFH in South Africa, the UN awarded its 2009 Habitat Scroll of Honour to the Gauteng project, which in that year took place in Alexandra, east of Johannesburg.

To date the housing organisation, which began its local operations in 1996, has helped 3 143 families in 34 communities across Gauteng, KwaZulu-Natal and the Western Cape.

This year will also see the completion of the 500 000th HFH home worldwide – this achievement will be celebrated in Kenya.

The wait is over

The bulk of the building took place in Orange Farm, a large informal settlement located between Johannesburg and Vereeniging on Gauteng province’s southern border.

Here, 34 houses, of the 39 originally planned for the community, took shape within the five days, while the balance was constructed in the two other provinces.

Jethro Mashile and his family were the beneficiaries of the Nedbank Home Loans initiative in Orange Farm. Having lived for 12 years in a tiny two-roomed house, the family were delighted to have more space.

Both are unemployed, with a meagre social grant as their only regular income. To support themselves and their two children, they take whatever temporary employment they can find, such as collecting metal cans, which brings in a small sum of money when the cans are handed in for recycling.

The Mashile family has been on the government’s low-cost housing list for six years. Now, with a brand new four-roomed house with electricity and running water, the parents feel they can offer their children a better future in a decent home.

“We’ve been involved with Habitat for Humanity since 2004,” said Eugene Drotskie, the GM of Nedbank Home Loans. “We consider this exercise to be a natural extension of our day-to-day work of helping people to acquire a home, and we find that it contributes to team-building as well.”

“People in our Cape Town and Durban branches were beginning to complain about being left out,” said Drotskie.

The project also falls in line with the banking group’s corporate social investment policy, which is led by the Nedbank Foundation and focuses on challenges such as health, job creation, community development and education.