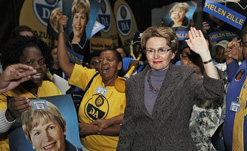 Mayor of Cape Town Helen Zille flanked by
her supporters. She has been named 2008
World Mayor for her dedication to taking
care of the city and its inhabitants.
(Image: Helen Zille)

Cape Town’s charismatic mayor Helen Zille has been announced 2008 World Mayor, making her the pick of a crop of worldwide city leaders that are making a sterling contribution to their cities.

The World Mayor Project has been run by London based independent internet platform http://www.citymayors.com since April 2003. The aim of the website is to publicise work being done by mayors in cities across the world and to raise their profiles in their countries and internationally.

Zille, leader of the Democratic Alliance (DA), the strongest opposition party to the ruling African National Congress (ANC) took up the position of mayor of the City of Cape Town in 2006.

“It is a great honour to have been awarded the World Mayor award. It is a tribute to the teams, in the mayor’s office, the city officials, my caucus colleagues, the team in Parliament and my family who work tirelessly to support me in everything I do,” says Zille. “It is a great incentive for us to keep working to build democracy in South Africa with opportunities for all.”

More than 800 mayors from around the world were nominated for the award. This was eventually watered down to 50 which included 11 mayors each from Asia and Latin America, 10 from North America and 15 from Europe. Two of the three African candidates who made the Top 50 list were from South Africa – the other being City of Johannesburg Mayor, Amos Masondo. The list was then further shortened to 11 finalists, including the mayor of Gothenburg, the second largest city in Sweden as well as mayor of Zurich, Switzerland.

Editor of City Mayors, Tann vom Hove, says Zille was the unanimous choice for the 2008 World Mayor Prize which was motivated by the comments and supporting statements readers made during the adjudication process. “The Mayor of Cape Town has dedicated all her professional life to further the well-being of all sections of South African society. She has done so with courage, tenacity and, above all, a deep-felt love for Cape Town, her country and its people.”

Zille’s association with politics began as a reporter for the Rand Daily Mail where she made her mark by uncovering the truth behind the death of apartheid activist and Black Consciousness Movement founder Steve Biko.

She was the Member of the Executive Committee for Education in the Western Cape and subsequently became a Member of Parliament for the DA. Within the party rose to deputy federal chairperson and became the national party spokesperson and spokesperson for education.

She was a finalist in the South African Woman of the Year Award in 2003. Zille reflects the multilingualism of the country, and speaks English, Afrikaans and Xhosa (as well as the language of her parents, German).

A total of more than 200,000 votes and comments on the finalist mayors were received from around the world. In previous years voters were allowed cast the make their choice with a simple click. This year though, all voters had to provide a comment for their votes to count.

Commenting on Zille’s performance, one reader had this to say, “I served under the previous mayor, and now have the privilege of serving under Helen. The difference in the council is phenomenal. Every councillor is included in portfolio committees with real oversight powers and input, whereas previously input from all but the chosen few was listened to.  We now have a public accounts oversight committee (the first in a South African municipality), with an opposition party chairperson, to ensure real accountability and minimise corruption. Mayoral Committee meetings, which were previously held behind closed doors, are now open to the public and the media.  The appointment of officials is being done on merit, instead of on political allegiance. Performance is being driven from the top, and we are all being held accountable in our sphere of influence.”

Runner up in the contest was Zurich’s mayor Elmar Lederberger while the third spot went to Leopoldo Lopez, Mayor of Chacao, Venezuela.