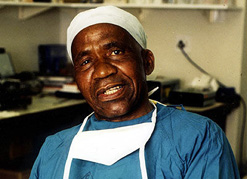 When South African cardiac surgeon Christiaan Barnard stunned the world by performing the first human heart transplant at Groote Schuur Hospital on 3 December 1967, little was known or said about Hamilton Naki, an unassuming lab assistant who was often at Barnard’s side.

Despite Naki’s surgical achievements, which helped make the first human heart transplant possible, he lived in obscurity for many years, eking out a living on a gardener’s pension.

During the height of apartheid in South Africa there was no reason to believe that a largely uneducated black assistant was anything more that a labourer.

Naki once told a BBC interviewer, “Those days you had to accept what they said, as there was no other way you could go, because it was the law of the land.”

But after the country’s first democratic elections in 1994, Naki’s contribution to open heart surgery came to the fore, allowing for his remarkable story to be told.

Naki was born on 26 June 1926 in the former homeland of Transkei in the Eastern Cape province. He attended school until age 14, when famine and poverty forced him to hitch-hike across provinces to Cape Town, in search of work.

As a youth Naki was hired by the University of Cape Town (UCT) to maintain the tennis lawns. He remained in the city for the rest of his life, sending most of his wages home to support an extended family of 11.

In 1954, Robert Goetz, the university’s professor of surgery, asked him to lend a hand in the laboratory to hold down a giraffe he was operating on. Goetz wanted to find out why the animals did not faint when they lowered their heads to drink.

Naki impressed the professor so much that he invited him to work in the lab. Although first designated to clean out the animals’ cages in the research lab, he soon became adept at performing a wide range of surgical procedures and he was given special permission to continue research work in the labs. He also took over the postoperative care of the animals.

Blessed with profound intelligence and memory, Naki learned by watching other surgeons and was soon able to carry out a liver transplant on a pig virtually unaided.

There was little the qualified surgeons could do that Naki couldn’t.

When Goetz left for America and Chris Barnard arrived at UCT, Naki’s abilities were recognised by the pioneering doctor. Barnard first used him as his anaesthetist and later as his principal surgical assistant.

Naki worked with Barnard as he was developing open heart surgical techniques experimentally.

Barnard told the Associated Press in 1993 that “if Hamilton had the opportunity to perform, he would have probably become a brilliant surgeon”.

In an interview shortly before his death in 2001, Barnard said Naki was “one of the greatest researchers of all time in the field of heart transplants”, adding that he “was a better craftsman than me, especially when it came to stitching”.

It is said that Naki played a major role in training 3 000 heart surgeons who studied under Barnard.

Doctors who observed Naki’s work described how he managed to join tiny blood vessels with amazing dexterity and was able to skilfully finish the medical students’ surgeries in the animal lab.

Professor Ralph Kirsch, director of the Liver Research Centre, describes him as “one of those remarkable men who really come around once in a long time”.

“As a man without any education, he mastered surgical techniques at the highest level and passed them on to young doctors. I don’t think that happens very often anywhere in the world,” Kirsch said.

Naki recalled how medical students often consulted with him for guidance. “That’s why they called me a surgical father,” he said, according to an Associated Press article in 2005.

Although he lived in a tiny room in Langa, an impoverished township in the underprivileged area known as the Cape Flats, with no electricity or running water, Naki would set out to work every morning in a hat, suit, tie and polished shoes.

Even after his retirement, Naki continued to make a difference by raising money for a mobile clinic in his rural hometown in the Eastern Cape. He also called on surgeons – who were once his trainees – to donate money for a school in his home province.

In 2002 then president of South Africa Thabo Mbeki gave Naki the country’s highest order, the National Order of Mapungubwe, for his years of service.

The following year Graça Machel, UCT’s vice chancellor and wife of former president Nelson Mandela, gave Naki an honorary degree in medicine in recognition of his work in the field of surgery.

On 29 May 2005 Naki died of a heart attack but his life and work, alongside the achievements of Barnard, have been captured in a documentary, Hidden Heart, which is currently on circuit in South African cinemas.

The Swiss, German and South African production, from directors Cristina Karrer and Werner Schweizer, gives an intimate look at the relationship between the two medical pioneers and finally gives due credit to one of South Africa’s most unlikely “surgical fathers”.