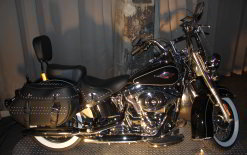 Harley-Davidson’s 2012 range is sure to
be put through its paces, not just with
everyday activity but also at the many
goodwill events where the Harley brand
is represented.
(Image: Sean Oberholster) 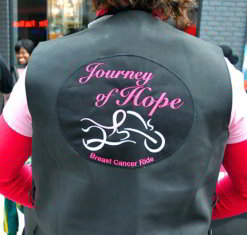 Loud. Menacing. Dangerous. For many people, these are the first words that come to mind when thinking about motorbikes and bikers.

For bikers, it’s about the wind in your hair, the freedom a motorbike can give you, no restraints or seatbelts, a passion for speed, pushing the limits for excitement, a way of life. For Harley-Davidson riders it’s also about giving back to others.

The iconic motorcycle brand recently launched its 2012 range, and whether the mighty machines inspire envy, admiration or irritation, it is important to not forget that they are used extensively for good in South Africa and elsewhere.

“The launch was proof that Harley is a unique lifestyle brand that extends far beyond the road.”

Doing good around the world

Harley-Davidson’s official charity is the Muscular Dystrophy Foundation of South Africa, a cause that’s promoted at rallies and other gatherings. Other chapters around the world support the cause in their own regions.

Over 31 years of support, Harley riders have raised millions for research into the disease, which affects people through increasing muscle weakness and death of muscle tissue. Eventually physical functions may become so severely impaired that the individual’s quality of life is diminished.

Another charity actively supported by local Harley riders is the annual Toy Run, where bikers bring a toy to give to a needy child over the festive season.  Other riders take part in events such as the Journey of Hope run for breast cancer, or Bikers Against Crime.

In July 2011 the Harley brand was involved in the annual Bikers for Mandela Day initiative, which saw a group of bikers depart on a 2 200km round trip through Gauteng and Mpumalanga provinces, working in soup kitchens, painting childcare centres, and helping communities wherever possible.

The stereotypical biker is a tough-looking guy with long hair, a beard, bike leathers, tattoos and piercings who belongs to a motorcycle club. While many bikers look the part, underneath they are often professional working people such as doctors, lawyers and other well-earning individuals who buy Harleys to show off their achievements in life.

Harleys are generally pricier than the average bike. For many owners, customisation is key, and one Harley can differ vastly from the next one, with unique parts and qualities. This is part of the Harley tradition.

Each area with a Harley-Davidson dealership has an associated motorcycle club. These clubs are very supportive of charities, and within the Harley community, over 65 000 bikers have been known to show up for fundraising events.

On Harley Davidson runs, responsible riding is what it’s all about and there will always be safety officials present to make sure rules are followed. A chosen biker leads the way, setting the pace for everyone to follow. This biker may not be overtaken because he or she rides at a speed that is safe for everyone.

New toys for boys and girls

With 2012 looming, Harley-Davidson’s new range for the coming year features 29 new innovations, including a bike that changes as your mood changes. The new Dyna FLD Switchback, for touring or for cruising? It can be either within 30 seconds as the bike sports easy-to-detach saddlebags and windscreen, effortlessly changing from one style to the other.

Harley celebrates the 10-year anniversary of the original V-Rod engine with a limited-availability power cruiser, the V-Rod 10th Anniversary edition, which will only be sold during 2012. This is one of three new bikes in the V-Rod range alongside the Night Rod Special and the V-Rod Muscle.

The new number for Harley-Davidson is 103, as the 2012 line hasn’t just had a change in looks, but a change in heart too. Harley has selected a few of the new models to carry the 103 cubic inch engine, a more powerful, yet more fuel-efficient development.

The twin-cam powerhouse, equivalent to about 1 700 cc, allows for cruising at lower revolutions, so the rider can enjoy the ride for longer. The 103 engine produces about 6% more power than its predecessor, the 96.