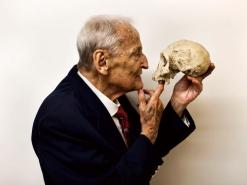 Now approaching the age of 87, Professor
Phillip Tobias is one of the world’s top
authorities on human evolution.
(Image: Line Hadsbjerg)

Denmark-born development specialist Line Hadsbjerg grew up in Kenya and South Africa, and has now shown her love for her adopted homeland in a book profiling remarkable South Africans, those in the public eye as well as ordinary citizens.

The Cape Town University anthropology graduate has worked in various positions and countries around the world, but says the “incredible people” she was exposed to during her years in South Africa were the inspiration for the challenge of researching, compiling, and publishing the book – titled Remarkable South Africans – almost single-handed.

The project took a lot of savings, two years and 13 000km to complete but, says Hadsbjerg, “it was a remarkable journey into the lives of these individuals.”

One of the big difficulties lay in choosing who to feature. Hadsbjerg eventually narrowed down the selection of people to just 27. Some were chosen, she said, on instinct, others were nominated via her website.

The 27 people featured in the book do not include former president Nelson Mandela. This, wrote Hadsbjerg in her introduction to the book, is because he is not just a remarkable South African, but a remarkable man – one who represents all humanity.

“This book has been created in his legacy,” she wrote, adding that she felt privileged to have lived through South Africa’s transformation under his leadership.

Proceeds from sales of the non-profit publishing initiative, of which there are 3 000 copies in the first print run, go towards projects chosen by the people who gave their time to be interviewed for the book.

The haunting images were captured by award-winning Spanish photographer Pep Bonet, who travelled with Hadsbjerg around South Africa for two months and thousands of kilometres, while they interviewed the final group.

An exhibition featuring a life-sized selection of Bonet’s photographs is now on permanent display at the Old Museum at Constitution Hill in Johannesburg.

The book, says Hadsbjerg, features South Africans from all walks of life and of all ages. The common element is that they have made South Africa a better place, whether through their lives, work and passion for their country, or simply because of who they are.

In her foreword, academic and businesswoman Dr Mamphela Ramphele said that the book “calls on each and every South African to play an active role in society.”

Notable leaders, celebrities and other personalities such as musician Johnny Clegg, acclaimed Paralympian Oscar Pistorius, Imtiaz Sooliman of humanitarian organisation Gift of the Givers, and renowned palaeontologist Phillip Tobias, have their place in the book, and their achievements are well documented.

But there are many unsung heroes, ranging from three-year-old Zimbabwean baby Luc, who was abandoned in a field in a Johannesburg township at the age of three weeks but who found a home in the family of the owner of a nearby farm; to former freedom fighter and explosives expert Patrick, who started an orphanage on his release and now works to find homes for needy children; and retired teacher Val, who writes and produces her own books for children in her Mpumalanga community so that they will be able to know the pleasure of reading.

There are others – the woman who started a support group for grandmothers in her community, as they are often the ones left to raise the children when parents succumb to Aids; the game ranger who would sacrifice everything to keep the animals safe; the environmental activist who runs a greening project in Johannesburg’s inner city; the Soweto woman who cares for 2 000 children, organising school uniforms and fees, and ensuring they get a meal a day; and many more.

These individuals are just the tip of the iceberg – there are thousands more like them around South Africa, and while they all have different stories, in their own unique way they have contributed to making the world around them a little brighter.