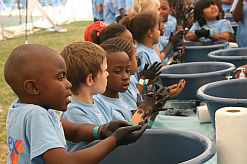 Children preparing to wash their hands in
an event aimed at breaking a Guinness
World Record. 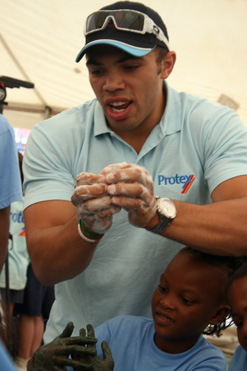 To celebrate Global Handwashing Day, South African rugby hero Bryan Habana and nearly 2 000 Gauteng schoolchildren set a new Guinness World Record for the most people to wash their hands at the same time at a single venue.

The record was set on 15 October 2009 at a primary school, east of Johannesburg.

As soon as Habana, one of the world’s top rugby players and stars of South Africa’s national Springboks team, lifted up his hand, a hail of screams followed.

These were the sounds of delight from the 1 802 children, from Edenglen and Eastleigh schools, who had gathered to wash hands with their hero.

A world record was at stake. They wanted to smash the previous one set by 1 213 participants at the Banani Bhiddwa School Niketon of Dhaka, Bangladesh, on 22 October 2008. It seemed an easy feat to supersede.

The message that Habana and all other participants wanted to deliver to South Africa and the world was that using anti-bacterial soap to wash your hands is critical. “It doesn’t only prevent infections, it also saves lives,” the rugby great said, who in 2007 scooped the International Rugby Board Player of the Year Award after helping the Springboks win the World Cup that year.

Habana, who currently plays for the Pretoria-based rugby franchise the Blue Bulls, is part of the Gimme 5 for Germ-free Hands campaign led by Protex, an anti-bacterial soap brand.

The drive aims to highlight the importance of regularly washing hands with soap and is part of the brand’s advertising strategy.

Campaign leaders have visited a vast number of schools across the country to “spread the word” about hygiene, said Del Levin, marketing director at Colgate Palmolive, which owns the soap brand.

“We have visited more than 1 200 primary schools throughout the country, educating the youth and leaving behind our materials … in relevant locations to remind them of the hows and whys,” said Levin.

Global Handwashing Day was not only marked at Edenglen and Eastleigh. About 1-million children from schools around South Africa washed their hands under the auspices of the brand on that day.

Habana said his participation in the campaign was part of his “ploughing back into society” plan. “Giving back to communities is the best thing. We will be able to make a difference, not just in South Africa, but in the world,” Habana said.

South Africa’s Department of Water Affairs joined in the Edenglen event as partners, but it also led other hand-washing events for children in all the country’s nine provinces on the day, said Cyprian Mazubane, the department’s director of sanitation implementation, and acting chief director of the National Sanitation Programme.

“Promotion and provision of sanitation is part of the work of the department and we view the message of hygiene as part of that,” said Mazubane. “It is very important that children are taught at a very young age about washing their hands … We are saying wash your hands, spread the gospel by starting at home and then [spread it] to your neighbours.”

“Wash your hands with soap to remove bacteria and prevent communicable diseases,” was Mazubane’s key message.

When the time to wash hands and break the record came at Edenglen, the children were ready for it. They had listened attentively to instructions, as Guinness World Record guidelines need to be followed properly.

Guinness World Records adjudicator Carl Saville, who flew out from the UK for the occasion, observed with interest.

With the help of volunteers and teachers, preschoolers and grade six pupils first got dirty by creating a canvass of handprints in the shape of the South African flag.

With hands brightly smudged with the colours of the country’s flag, the race against time began. They had 20 seconds to smash the record. Habana also joined in by washing his hands.

“Hygiene is a vital part of our education. It keeps our nation healthy and it is a good thing we are making children aware,” said Dian Rademan, principal of Edenglen Primary.

The involvement of Habana was critical, said Eastleigh Primary’s principal, Belinda Cooke. “Our pupils are taught hygiene in every grade. With Habana being their hero, the children were more willing to listen to him,” she said.

The 1 802 children washed their hands clean in 20 seconds and the world record was shattered. “They have done very well, breaking the record. They smashed it,” said Saville. “It was a well-organised record attempt … it was a pleasure to adjudicate an attempt with such a positive message.”

Though a new record has been set, it’s not guaranteed that the children will make their way into the Guinness Book of World Records for 2010, which will go on sale on 17 September next year.

About 6 500 records are set every year and the World Records board has to decide which ones will be mentioned in the prized publication.

But, this is “an extremely important record … it looks promising that it will make it to the book,” said Saville.

Habana is looking forward to smashing the record with more children in coming years, he said. “Yes definitely. We are looking at setting a new record, with more children, next year. We want to make this campaign run for longer,” he said.