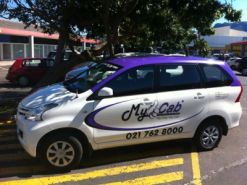 Zapacab is beginning plans to roll out to Unicab’s new southern suburbs based fleet, MyCab, to begin trials with.

The founders of the hi tech hailing system, Paul Donner and Rupert Sully. 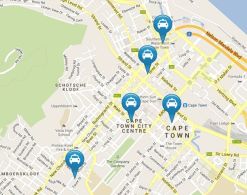 Commuters are able to track the location of the cabs location on a map using a smartphone or computer.
(Images: Zapa Cab Facebook)

Getting a taxi is a little simpler and quicker now, using a taxi hailing service that allows passengers to request a ride at the touch of a button from the convenience of a mobile phone.

Zapacab is South Africa’s first home-grown taxi hailing mobile service. It connects people with taxi drivers by smart phones, and is operating in Cape Town and, to a smaller degree, in Johannesburg. The inspiration for Zapacab came from two businessmen, Paul Donner and Rupert Sully, who wanted to improve life for people who used taxis.

Sully, the Zapacab chief executive, said the group had created applications that were extremely easy to use for drivers who had little exposure to smart phones and touch screens. “We are the first app to launch in South Africa that allows for the easy hailing of a taxi to a passenger’s door. We are unique in the way in which we are providing a service to empower existing fleets.”

Using a smart phone or computer, passengers can log on to the Zapacab website and enter their mobile number and address, and then click on the “zap me a cab” button. “Our web app will automatically detect their position and one of the five closest certified cabs will be sent a message. The first to accept will receive the user’s request and map location. [The user] can monitor the cab approaching on a map,” he explained.

The drivers are given mobile phones with the app installed on them. The closest driver to answer the call is then the one to pick up the customer. “The current system of hailing cabs in South Africa is broken. Dispatch systems are inefficient, resulting in waiting times of over 30 minutes. We are adding a technical layer to aggregate existing cabs in southern Africa for a more convenient user experience.”

The company worked with about 70 fleet owners and independent cab drivers in the Cape Town CBD. “Additionally, we have recently signed a deal with Rikkis, which will be providing services at only R10 per kilometre to Zapacab users. We are also beginning plans to roll out to Unicab’s new southern suburbs fleet, MyCab, to begin trials with them.”

The informal public transport system in South Africa is dominated by minibus taxis. This is the cheapest form of transport and the daily lifeline of the bulk of the working population. Minibus taxis are the only form of public transport that penetrates every place in cities and villages, including the poorest shack settlements.

In Johannesburg, the Gautrain carries about 40 000 train passengers a day, and between 14 000 and 16 000 bus passengers a day. The Gautrain is Africa’s first rapid railway system and comprises two links, one between Pretoria and Johannesburg and other between OR Tambo International Airport and Sandton. It was introduced in 2010 to ease traffic congestion between the country’s economic hub and administrative capital, and give commuters a viable alternative to road transport.

Joburg’s bus rapid transit system, Rea Vaya, carries more than 42 000 passengers a day. More than a thousand trips are made each day and 18 500 kilometres are travelled daily by the bus group. The popularity of Rea Vaya has led to a modal shift from vehicle use to bus travel, especially in areas such as Soweto. Many professionals are now choosing to leave their cars at home to catch the bus to work.