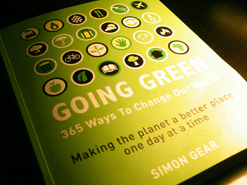 Going Green – 365 Ways to Change our
World is intended to be a guide for anyone
starting out on a greening journey. 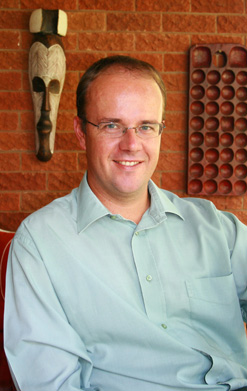 “I recognised that I personally must either
have done, or be prepared to do,
everything in the book,” says Simon Gear.

Simon Gear’s daily news and radio weather forecasts have become something of a tradition, with South Africans tuning in to decide what to do on their weekends, or what to wear. These days the country’s favourite weatherman is also helping people to live sustainably and save the planet, through his new book Going Green – 365 Ways to Change our World.

Gear’s book steers away from the usual gloomy predictions and finger-pointing associated with global warming. Instead of telling people what they are doing wrong, the book offers 365 tried and tested tips to protect the environment and decrease each person’s carbon footprint.

What Gear likes about the book is that it’s versatile, and there are no rules about reading it. Although there are 365 tips, it is not intended to be a  “daily environmental devotional”.

“I certainly don’t recommend that you try and start on the 1st of January with tip number one and march resolutely through to December, doing one a day,” he says. “It really isn’t that sort of book.” Rather leave it on your coffee table, browse through it and start making small changes. “The nice thing about each tip is that it is bite-size information that can be read on the run.”

The book is intended to be a guide for anyone starting out on a greening journey. It has practical tips for the home and garden, family, work and community, travel and leisure, and food and drink. Some of the suggestions are easy to implement: taking the stairs instead of the elevator, not overloading the fridge, showering instead of bathing and using electronic banking.

Other tips are more challenging and unusual, worth trying out. You could make your own wine and cheese, give up smoking, keep chickens, obey the speed limit, adopt a zoo animal, get buried in a cardboard coffin (apparently Barbara Cartland was), and “fall back in love” (apparently divorce doubles your carbon footprint).

Gear explains that the tips aren’t merely good ideas. “The book doesn’t reinvent the wheel,” he says. Much of the content draws attention to other people’s innovations and ideas that are already helping to protect the environment.

When he started compiling and selecting the tips he had two rules: “I recognised that I personally must either have done, or be prepared to do, everything in the book. I actually do many of these things such as growing my own vegetables, recycling, making compost, keeping earthworms and having an indigenous garden.”

What he also brings to the book is his knowledge of the environment. A significant part of his work is in the media industry and he is always aware of the issues circulating in the environmental media.

“I grew up in a household that was very aware of environmental issues so it is very much ingrained and part of what I do. It isn’t only a casual interest,” he says.

Gear isn’t only a weather presenter; he’s trained in climatology and has also completed his honours in environmental science at Wits University. While finishing the book, his masters degree in savannah ecology took a bit of a backseat, but he hopes to have more time for it now. When he’s not presenting the weather, he also works as an environmental consultant, where his area of expertise is air quality.

He got into television almost by chance, he says. In 1991 he went for an audition and a few days later the South African Broadcasting Corporation (SABC) phoned to tell him he had the job. He first worked as a weather presenter on SABC 2’s Morning Live breakfast show and later moved to SABC 3.

Before his life got busy he was involved in training new weather presenters in presentation skills. He has a lot to say about what makes a good weather presenter and how to build a strong television presence. A good presenter must have a solid grip on climatology and be able to find their way around a map, he advises. A good dose of charisma also helps. “But always align ‘what you do’ with ‘who you are’ and stick to it,” he says.

He believes his interest in the media industry together with his training in climatology has been a huge advantage.

“I am a professional scientist with a huge interest in the media. I love this balance. There are few people who are qualified in climatology and even fewer who also like media,” he explains.  With Going Green, he has put both his celebrity and his scientific mind to good use.