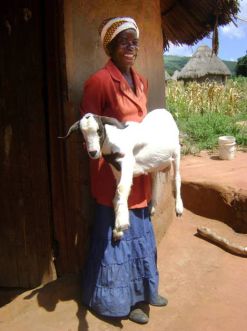 Julia Ngwana went from being an
unemployed single mother to a
successful goat farmer, which
has earned her enough money
to send her children to school
and university.
(Image: Heifer International
South Africa)

Julia Ngwana went from being an unemployed single mother to a successful goat farmer, thanks to the help of Heifer International South Africa, a community development organisation.

After starting off small with two goats, Ngwana grew her venture over time and raised enough money to give her children a quality education. Her daughter Dakalo is now in her third year of a BSc degree at the University of Venda.

Living on the breadline

“My husband left us when my first born was doing grade four and I did not know what to do because I wanted my children to go to school,” she says. Suddenly, Ngwana was left without any means to support her four children.

As an interim measure, a social worker was able to arrange for the family to receive a monthly 5kg package of food, as well as soap. The food parcel made a big difference to the family’s situation, but it was not enough to feed five people for the month.

She also had to walk 30km every month, from Tshitavha to Thenowa villages in Limpopo province, to collect the food parcels.

Without an income Ngwana was unable to pay her children’s school fees, and her first born daughter, Livhuwani, had to stop going to school. Even a letter from the chief of her area, explaining the circumstances, did not help.

The organisation works with communities in an effort to end hunger and poverty in the country.

Magdalena Wos, resource development officer at Heifer, says the project’s goal is to help vulnerable people in society, particularly single-parent families and women. However, male beneficiaries are not excluded.

The project provides families in need with livestock and training in animal management to ensure the animals remain healthy and productive.

The organisation has a unique development approach that focuses on “Passing on the Gift” – a practical way of sharing and caring, Wos explains.

Every family that receives livestock agrees to pass on the first female offspring, training and skills they have acquired to another needy family, as identified by the original beneficiary.

This is exactly what Ngwana did when she started working with Heifer International as part of the Saambandou Project in Limpopo in 2007. Through the project, she received training and two goats.

Soon after the goats arrived, the doe gave birth to twins. Ngwana immediately passed on the “gift” to another needy family, fulfilling her commitment to Heifer International.

“I looked after the goats very well and then they again gave birth to twins. I was able to sell six goats for my daughter to register with the University of Venda,” she says.

Since receiving the first two goats, she has raised 12 goats. Every so often she sells a few more to generate additional income to support her family and keep her children in school. She also grows vegetables in her garden, from which she earns about R350 (US$42) per month.

The family is now self-sustainable and no longer relies on handouts.

Ngwana’s daughter also wants to get involved with the Heifer project. When she finishes her studies, she wants to buy four goats, two for her mother and another two for the Saambandou project, to help another poor family.

“There are many fascinating stories that show how Heifer International has empowered people with tools and knowledge to build their own businesses,” Wos says.

Heifer has helped more than 3 000 households in South African communities affected by high levels of unemployment, malnutrition and a degraded environment.

Project manager Elizabeth Lefoka speaks highly of Ngwana: “She was struggling a lot, but she was very dedicated and she raised the goats very well,” Lefoka says.

Although she has already met her commitments to the Heifer initiative, she is still passing on knowledge, skills and a positive attitude to other families in Tshitavha.