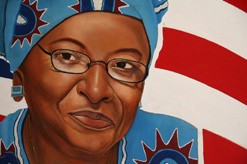 The Iron Ladies of Liberia takes a
behind the scenes look at Liberian
President Ellen Johnson Sirleaf and her
Cabinet’s challenging first year in power.
(Image: Why democracy?)

A film, which has South African-born Don Edkins as its executive producer, won a host of international awards in June 2008 for its ability to generate debate on the concept of democracy.

Iron Ladies of Liberia is one of a series of 10 documentaries commissioned by Cape Town-based non-profit production company Steps International under their Why Democracy? project, which saw a select group of filmmakers from around the world explore the meaning of democracy and how it is viewed in different communities and scenarios.

The production takes a behind-the-scenes look at Liberia’s President Ellen Johnson Sirleaf, who was sworn into power in 2006. Sirleaf is the country’s first freely elected head of state and the first female president in Africa. She faces the onerous task of uniting a country that – prior to her election – was racked by nearly two decades of civil war, addressing its debt and reviving its economy. Since coming to power Sirleaf has appointed several women in her Cabinet and this documentary follows her and her administrative team during their first year in office as they tried to prevent further conflict.

On 10 June 2008 the film was named the best political documentary and best documentary at the Banff World Television Awards in Canada, which honours the best television programmes from around the world. At the One World Media Awards in London held two days later, on 12 June, Iron Ladies of Liberia was presented with the prestigious Millennium Development Goals Award (MDG). This honour is for broadcast, print or new media coverage addressing the progress or challenges in meeting the 2015 MDG set out by the United Nations, which covers issues such as health, education and poverty.

The Why Democracy? project was launched in Amsterdam in 2004 at the International Documentary Festival. The organisers called for proposals from documentary and filmmakers around the world and more than 700 entries were received.

In October 2007 the 10 selected hour-long documentaries were televised by 42 broadcasters in 180 countries to more than 300-million people. Along with screening the documentary, each broadcaster agreed to air other programmes, debates and discussions to tie in with democracy theme.

The Why Democracy? project has produced some exceptional, challenging and unconventional work. According to the Why Democracy website, “The films are unconventional documentaries in two senses: firstly democracy, an idea, is their primary focus above any specific country or event. Secondly, they are not overtly prescriptive. These are not films by experts, about experts, telling us what ‘the situation is’ in Iraq, or Chile, or South Africa or Iran. These films hope to illuminate for anyone, in any country, a gnarly idea called democracy. Democracy as it exists today, not as we wish it to be.”

Edkins also produced the Southern African series on truth and reconciliation, Landscape of Memory, and the multi-award-winning documentary project, Steps for the Future, a collection of 38 films about Southern Africa in the time of HIV and Aids.