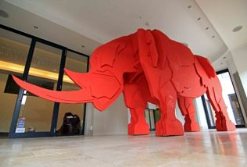 The Crash of Rhinoceros is now a large-scale platform of conscious artwork, whereby the public can use the template – My Rhinoceros – to create their own rhino sculptures.

A rhino installation made by several artists, launched at the Afrikaburn cultural festival in April 2012.
(Images: Extinct) 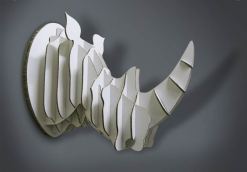 Joanna Orr’s hunting trophy head of a rhino, made from recyclable materials.
(Image: Head on Design)

Through her conscious art background, Cape Town-based artist Nix Davies is doing her bit to help fight the current plight of South Africa’s rhino population, which continues to drop in large numbers because of rampant poaching.

Crash of Rhinoceros is an initiative started by Davies that aims to create awareness about rhino poaching and the dangers faced by the animals on a daily basis. EXTINCT, a collection of rhino sculptures made by several artists who worked with her, launched at the annual Afrikaburn cultural festival in April.

The exhibition consisted of life-size artworks modelled in the shape of the rhino and displayed across the Karoo desert, where Afrikaburn is usually held.

Conscious art is art with a voice. “It is about adding value to the making and understanding of the art by increasing our awareness of what we are doing, the context in which we make art, and the motivations that produce art,” says Davies.

The name serves its intended purpose of creating a sense of disturbing awe.

The idea of EXTINCT came about when Davies decided earlier in 2012 to educate Western Cape pupils about the danger faced by rhinos. A larger collaborative movement grew from this, with other artists, teachers, conservationists and members of the public coming on board to expand the work.

Davies’s vision for Crash of Rhinoceros, however, does not end at the viewing of sculptures by the public. The aim is for the movement to be adopted by artists in other countries as well. Through a template called My Rhinoceros, which varies in size, anyone wishing to build their own rhino sculpture can do so. Australia and Taiwan have already taken to the movement, and several of the artworks have been spotted in those countries.

The template is made out of X-core board, a type of fibreboard made of recycled materials, and widely used in the construction industry. Through EXTINCT’s Facebook page, interested parties can learn how to build their own rhinos from scratch.

“It will raise the conscious awareness of the long-term effects of our actions as humans,” said Davies of the global movement.

She plans to extend the installation internationally by linking with artists, activists and conservation groups in other countries.

One artist who has extended the efforts of EXTINCT through her own work is Joanna Orr, who started a graphic and web-design company called Head on Design. Orr’s company produces its own range of rhino sculptures, in the style of hunting trophies mounted on the wall.

The sculptures are made from recycled material similar to that of the Crash of Rhinoceros works, and funds from their sale are channelled to anti-poaching projects.

Orr uses either tanned upholstery or suede leathers in a wide range of colours, or X-core board in white, with some of the trophies colourfully decorated with paintings by local artists. Buyers of the rhino sculptures get to choose which organisation their money will go to.

Each design takes around a month to create and perfect, the process starting with a sketch of the head at different angles to get a feel for the three-dimensional form.

Sculptures are similar in size to that of the actual animal. 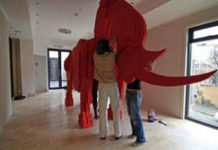 Giving rhinos a voice through art