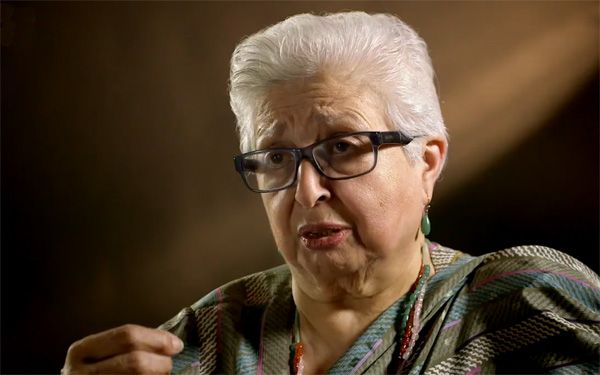 Frene Ginwala helped build and grow the ANC in exile and in the first 10 years of democracy. (Image: George W Bush Institute)

Frene Ginwala helped build and grow the African National Congress (ANC) in exile and in the first 10 years of the democratic Parliament, when she was the speaker. The 82-year-old was in exile for 31 years, and returned to South Africa in 1990.

The Presidency adds: “She commanded high respect among members of parliament and the public in her tenure, which spanned the first critical decade of our democracy.” Over the years, she held several high-level positions in the ANC, including member of the top decision making body, the National Executive Committee, and the National Working Committee.

Some roles were not always where she saw herself. In a June 2008 interview she said she was reluctant to become the speaker of parliament. “I had not wanted to be speaker, but it was very much his [Nelson Mandela’s] decision, and he had to persuade the leadership about it. I wanted to go to parliament, but I wanted to write and speak and be a member. Anyway I found myself as speaker.”

In the first democratic parliament, Ginwala wanted to put the minority parties on the front benches of parliament. She put her proposal to Mandela, the president, and he liked it. “I said to him, ‘Parliament is televised and people will watch it, and if they can see their leaders sitting in parliament there will be an identification.'” As a result the Democratic Party, Pan Africanist Congress and Freedom Front were given the front benches.

Ginwala was born on 25 April 1932 in Johannesburg, and read law at the University of London, where she received an LLB degree. Later, she received honorary law doctorates from the universities of KwaZulu-Natal, Cape Town and Connecticut in the US. Awards given to her over the years include the Global Award for Outstanding Contribution for Promotion of Human Rights and Democracy from the Priyadarshni Academy, India; the Presidential Award from the Black Management Forum; the Woman of the Year 2000 from the Law Faculty at the University of Pretoria; and an Honorary Fellow from Linacre College at Oxford University.

She returned to South Africa to train as a lawyer, and soon afterwards, in 1960, the ANC was banned. She went into exile a year or two later, and played a role in helping prominent members of the ANC such as Oliver Tambo escape into exile. Based in Tanzania, Ginwala helped establish the organisation in exile. She also worked as a journalist and broadcaster in Zambia, Mozambique and Tanzania, and was the managing editor of The Standard and The Sunday News in Tanzania. She was founder and editor of a monthly journal, Spearhead, in Tanzania, a country to which she would return during her 31 years outside South Africa.

In the late 1960s, Ginwala went back to the United Kingdom and started a PhD in philosophy at Oxford University, where she also lectured. While in the UK she gave speeches and wrote articles on the need to boycott the apartheid government that were published in The Guardian and The Economist. She also became a broadcaster for BBC radio. It was a busy time: she was the head of the political research unit in the office of Tambo, then ANC president, and served as ANC spokesperson in the UK on sanctions, the nuclear programme and the arms and oil embargo of South Africa.

Ginwala has been the chairwoman of a number of committees, including the Global Coalition for Africa, the Commonwealth Parliamentary Association (SA), the Southern African Development Community Parliamentary Forum, and the International Parliamentary Union (SA). She is a former member of the United Nations Secretary-General’s Advisory Panel of High-Level Personalities on African Development, and she has served as commissioner of the International Commission on Human Security. She has actively promoted democracy, good governance, development and human rights, and human security throughout her long life.

The case for sanctions

During her time in exile, Ginwala wrote several articles on the subject of sanctions. “One such piece, written for the African Studies Centre at the University of Cambridge and published in 1988 is of particular note for the way it shows her growth as an advocate and writer,” reports sahistory.org. “Her legal expertise is clear in her style. She opens with an establishment of the facts and the case against apartheid. She highlights the role of the ANC, the justice of the cause, and the ways in which the claim on the part of the international community that they do not support the apartheid regime is inaccurate because trade and non-intervention assist the apartheid regime. Each argument for sanctions is presented and defended with references to international law and the responsibility of the ‘democratic free world’. Each argument against sanctions is presented and systematically refuted by examples of precedent or fallacies in the argument’s logic.”

The article reads like “a simplified legal brief and the organisation is somewhat reminiscent of the Declaration of Independence, no doubt intentional, as the United States was the international hegemonic leader and a significant trading partner for South Africa”.

Her parents had left South Africa for Mozambique after she left for the University of London. At that time the country was still under the colonial control of Portugal, but within months the anti-colonial guerrilla movement would begin. Portugal pulled out in 1975.

During her years in exile, she spent some time in Mozambique, and in the 2008 interview she talks about the country, pointing out that it had been virtually destroyed during the 1970s and 80s, when South Africa and the then Rhodesia (now Zimbabwe) armed the resistance group Renamo, causing the country to descend into civil war. The ANC had bases in Mozambique, and supported the pro-Communist Frelimo government. Finally, in 1990, a new constitution was adopted and in 1994 its first post-independence elections were held.

“I felt personally very strongly that the frontline states [Angola, Botswana, Lesotho, Malawi, Mozambique, Swaziland, Tanzania, Zambia and Zimbabwe, where the ANC found sanctuary after it was banned in 1960] had suffered immensely for our liberation. Mozambique had been destroyed, virtually. I felt that South Africa ought to acknowledge in a public way what had happened in the frontline states. So when the president of Mozambique [Joachim Chissano] came and addressed parliament, I took it on myself, without any warning or discussion, even with Madiba, to apologise to him for the damage that my country had done to him and his people.”

Her action led to demands for her resignation but she approached Mandela the next day and he approved of her apology. “It was very important for me to get that kind of support, because I had really stuck my neck out on that one.”

Her term as speaker of parliament ended in 2004. In 2005, she was elected the first chancellor of the University of KwaZulu-Natal, a post she held until 2009. In the same year she received the Order of Luthuli, given to those who have made a meaningful contribution to the struggle for democracy, human rights, nation-building, justice and peace, and conflict resolution. She was also awarded the Order of the Rising Sun from Japan. It is given to those who have made distinguished achievements in international relations, the promotion of Japanese culture, advancements in their field, and the development in welfare or preservation of the environment.

In 2007, she was appointed to head the inquiry into the suspension of the national director of public prosecutions, Vusi Pikoli.

She is now in a well-deserved semi-retirement, though she still holds positions on various boards and party structures, and is still involved in the UN and Unesco in an informal capacity. The apartheid regime shaped her life significantly, records sahistory.org. “The blatant violations of human rights and democracy were instrumental in establishing her worldview and her commitment to equality for all races, genders, and demographics… Though the three decades she spent in exile after the Sharpeville Massacre were likely filled with uncertainty and instability, Frene Ginwala earned a doctorate, wrote countless articles, became a widely recognised and esteemed international figure, and played a central role in the toppling of the apartheid regime.”

On her return, she was influential in writing the Constitution and establishing a government dedicated to equality and democracy.