Jenny Morris will be appearing in the next episode of Brand South Africa’s Play Your Part TV series on Sunday, 31 August at 9pm on SABC2. 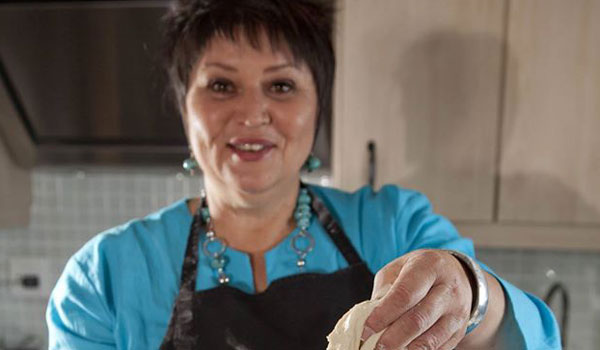 All your senses must be involved in tempting your palate, believes celebrity chef Jenny Morris. Known as the Giggling Gourmet, she is a sensual gourmand and one of South Africa’s most-loved food personalities. It’s no surprise: she has had an ongoing love affair with food since she was a little girl, devoting her grown-up life to her lover.

Morris wears a variety of hats; she is chef, food connoisseur, author, magazine writer, radio and TV presenter, teacher, caterer and culinary tour guide. It started with making delectable treats for school fundraisers, and has grown exponentially since then. “It’s a love affair in the true sense of the word, one that employs all the senses,” she explains.

Taste is the most obvious sense employed, as is aroma, but touch is also important. “Feeling your food is important. Caress it, stroke it, know it intimately.” How you eat your food will reveal what kind of lover you are, she says. “You don’t want someone who eats a sosatie [kebab] with a knife and fork, and if I can get presidents and heads of state to eat with their hands, I can do it for anyone!” And she has cooked for some of the most influential and famous people in the world, including Prince Charles, Al Gore, Charlize Theron, Thabo Mbeki and Kenneth Kaunda.

Among her kitchen essentials, Morris lists garlic, butter, olive oil, trusty zester, and dhania or coriander – or cilantro as it is known in some quarters. She set up her catering company, Giggling Gourmet The CooksPlayground, in 1997. She teaches practical, hands-on cooking courses at her cooking school, such as the famed CooksParties, TeamCooking and SingleCooks. All of them have fun and laughter as a main ingredient.

Morris’s signature ExperientialCooking method is based on her philosophy that “taking a recipe and owning it” is about a hands-on food learning experience allowing family, friends and colleagues to spend time cooking and sharing meals together.

Teachers at her school include Giggling Gourmet staff, local chefs, and visiting guest chefs. They teach three basic types of classes: ExperientialCooking, which is hands-on; TeamCooking, which is a team-building course; and demonstration classes. Her formula for success is to “entertain informatively and inform entertainingly”.

Combining ExperientialCooking and TeamCooking with easy-to-use recipes and top time-saving products can cut cooking time by 50% to 75% when preparing the family meal, she says. This gives families more time to spend together without sacrificing the flavour and quality of their meals.

But it is not only about the cooking school. Morris is a regular on radio and television locally and internationally. She is often a participant at food festivals and expos, and is regularly commissioned by food companies for recipe and menu development, as well as to promote and demonstrate food and related products.

In addition, the Giggling Gourmet is an examiner for The Culinary Academy, a judge for various food competitions, and is in regular demand as the first choice South African celebrity chef to make appearances at various functions and product launches. She works closely with a number well-known of international celebrity chefs.

Every celebrity chef has at least a couple of cookbooks to their name, and Morris is no exception. Her bestselling Rude Food, Nude Food, Good Food was published in May 2004. It was followed two years later by More Rude Food, and in 2012 she published Cooking with Jenny Morris.

Not content to rest, Morris’s Giggling Gourmet FoodTours has grown into a successful programme of culinary trips to places where the visitor can experience the food and culture of the destination. She has done culinary tours to countries such as Thailand, Malaysia, Borneo, Vietnam, Cambodia, Singapore, Hong Kong, mainland China and Morocco; future destinations will include Australia, Italy, Ireland and South America, as well as inbound trips to South Africa.