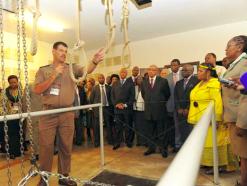 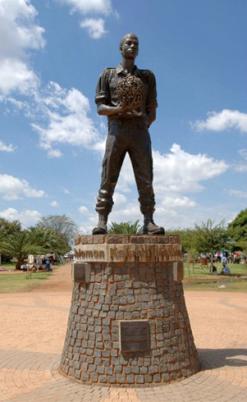 Freedom fighter Solomon Mahlangu was
just 23 when he went to the gallows.
(Image: Tshwane Tourism)

South Africa’s notorious gallows is now a memorial site which honours the fallen and is helping all South Africans to finally mourn those who were lost.

The Gallows Museum was opened in December 2011 by President Jacob Zuma during a two-day ceremony at the Pretoria Central Correctional Centre.

Zuma described the new facility as a place where the political prisoners who were hanged there can be honoured and the past can be buried.

At least 4 000 prisoners were hanged at the gallows – of those, 134 were political prisoners – until the Constitutional Court voted unanimously for the abolition of the death penalty in June 1996. This followed a decision in 1990 by former president FW de Klerk to impose a moratorium on capital punishment.

The gallows and cells used for executing those given the death penalty were destroyed but this, said Zuma, prevented people from getting to fully know and understand this painful part of South Africa’s history. They have now been restored.

“On this day we also acknowledge the pain of families whose loved ones were victims of the actions of some of the political prisoners we are remembering today,” he said. “In any war there are casualties. Today we remember all of them to, as we know that it cuts both ways.”

He said the 134 men were branded terrorists by the authorities of the time, but to their people and families, they were freedom fighters who were striving for a free and democratic South Africa.

He also named those executed after a clash broke out in the Cator Manor township, outside Durban, during the beer hall riots of 1959/1960.

These protests were in defiance of the government’s proclamation of Cato Manor as a white area, in an attempt to clamp down on the township’s growing climate of political unrest, and subsequent forced evictions.

The last person to be hanged was Solomon Ngobeni on 14 November 1989.

“At that late hour, when the apartheid state was almost on its knees, executions were still being carried out,” said Zuma.

The first Umkhonto we Sizwe cadres to be hanged for military operations included Vuyisile Mini, Zinakile Mkaba and Wilson Khayingo, who were executed on 6 November 1964 and Nolali Mpentse, Daniel Ndongeni and Samuel Jonas who followed them to the gallows on 23 February 1965.

During the late 1970s and 80s the state executed young freedom fighters Solomon Mahlangu and Andrew Zondo and others.

Walking up the final steps

The event was an emotional one for all present. Zuma sang “Senzeni Na” (isiZulu, meaning “what have we done?”), a song favoured by political prisoners on death row.

Zuma walked up the notorious 52 steps leading to the execution site before unveiling a dedicated wall with individual plaques for each of the political prisoners who died there.

“Today, all 134 names are officially being enshrined for eternity so that future generations will know what this country went through, so that we never go through a similar horror ever again,” he said.

Zuma asked those present to be mindful of the prisoners who had been on death row when their sentences were revoked, saying that they still live with the pain of knowing that they were so close to dying.

“We are opening this museum so that future generations can learn how things can go wrong if we lose our common humanness and shared nationhood, when we lose that sense of respecting each other as human beings.”

He urged all South Africans to remember the last words of the young Solomon Mahlangu, uttered as he was led to his death at the age of 23 – “tell my people that I love them and that they must continue the struggle”.

“Let his blood and that of all the patriots who fell here, inspire us to build a better South Africa that upholds human dignity and the right to life.”

A heavy burden for all South Africans

Zuma said that it had been hard too for the prison warders who worked on death row. Many were in their teens when recruited and needed help, even today, to come to terms with the roles they had played.

“They may have been brainwashed into believing that the death row prisoners deserved to die,” he said. “Or they were just clinically doing their jobs and had shut down the emotions involved with the official duty of executing people or looking after people who were waiting to be executed. Either way, they need healing too.”

Some long-term employees still worked at the prison, and in the spirit of healing, were willing to share their stories, Zuma revealed.

“They are the only ones who know what happened in the apartheid room.”

The day before, the families and friends of those who were executed were able to mourn the death of their loved ones by visiting the prison, where they performed traditional cleansing ceremonies.

For many of them, it was the first time they had visited the gallows.

They were then taken to two cemeteries in Pretoria to pay their last respects. Here, officials of the National Prosecution Authority’s Missing Persons Task Team were on hand to assist in locating the graves of their loved ones. With help from the government, these will be transferred to the families’ homes.

Religious and traditional leaders as well as counsellors and therapists were present to help families cope with pain and trauma.

Zuma extended his gratitude to the families.

“We hope this occasion contributes to the healing process and closure. May the spirits of your loved ones now rest in peace, for you have walked the steps that they walked on their last journey,” he said.