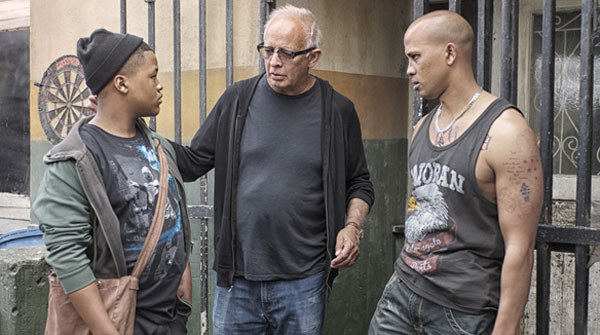 Gabriel is playing his part for South Africa as one of the nation’s most prolific commercials directors, working locally and internationally in Europe, North America, Asia and the rest of Africa. His combination of storytelling and performance, with his distinctive visual style is a defining quality of his work. (Image: Ian Gabriel)

Earlier this year, Four Corners was selected as the South African entry for the Best Foreign Language Film for the 86th Academy Awards.

The gritty, hard hitting crime thriller tells the story of a young chess prodigy who must defy the odds and stay one move ahead of the gangs in a game where losing can be the difference between life or death. It takes a hard look at the reality that many Cape Flats teenagers face daily.

“Every story that you get a chance to tell is vitally important while you’re telling it. Now that the film is made, it is engaging in a conversation that started and continues every week with the news of gang wars and the involvement and sacrifice of youths in turf wars. This is particularly prevalent in the Cape Flats, but it’s also true of youth in other marginal societies in South Africa who are growing up in a culture where there’s the pervasive threat of violence,” says the film’s maker, Ian Gabriel.

When making Four Corners, Gabriel wanted to make a film close to home. “I thought that was very important. Forgiveness was about family and individuals in family damaged by an act of the past. Four Corners is about family trying to get beyond the past to make a new life.”

The film is set in a mixed race community, which is the origin of his family as well. “I’ve spent a fair amount of time in my past thinking about those circumstances and how that reflects in unique ways on my life and history,” he says.

Gabriel is playing his part for South Africa as one of the nation’s most prolific commercials directors, working locally and internationally in Europe, North America, Asia and the rest of Africa. His combination of storytelling and performance, with his distinctive visual style is a defining quality of his work. He is known for his visual aesthetics and sound design, as well as a relentless pursuit of excellence across all aspects of production. Gabriel, it is said, has the ability to turn every creative opportunity into an interesting visual journey.

Born in 1951 in Durban, his career began at Johannesburg’s famous multi-racial theatre venue, Dorkay House. Here, a fascination with performance drew him into film, where he worked as a producer before becoming a commercials and music video director.

In the 1970s and ’80s many of South Africa’s jazz and theatre greats performed at Dorkay House, among them Kippie Moeketsi, Zakes Mokae, Cyril Magubane and Janet Suzman, as well as the then younger generation of performers such as Sipho Mabuse, Thule Malgas, Victor Ntoni, John Khani and Julian Bahula. From Johannesburg, Gabriel relocated to New York City, although in time he returned to South Africa.

In the 1980s, at the height of apartheid repression, he made music videos with British pop enfant terrible Malcolm MacLaren. These received a unique double silver and bronze award at the New York Film and Television Festival, putting unexpected music and dance images of Soweto on video charts around the world.

He has received accolades for his television advertising work at festivals in San Sebastian, Venice, Cannes, New York, London, Milan, South Africa and Hong Kong. He currently works on developing South African-themed documentaries and feature films. “I love finding the magic in the small moments equally as much as choreographing big action, big budget visuals.”

Making a start in the industry

“I was working at a black theatre company in legendary Dorkay House at the bottom of Eloff Street. A photographer / filmmaker I knew wanted to make a black version of Macbeth called Maxhosa. He called me and asked for my help casting the movie as there seemed to be no one else around at that time who was considered ‘qualified’ to cast a black movie in Joburg. Once I’d cast the film I worked as third assistant director on it, but soon found myself assisting the director with the performance work,” Gabriel explains.

But it was a sign of the times that he opted to go into commercials. The long-form industry was all SABC, status quo based. There was poor quality filmmaking, but there was some great commercial work being done at the same time, and ironically for those days, he says, with a great deal of freedom.

In 2003, he completed his first feature film, Forgiveness, to acclaim on the independent festival circuit worldwide. The film received Best African and South African Film accolades; it was a Golden Leopard nominee; and Gabriel received the Youth Jury Best Director Award and was the recipient of the prestigious Human Rights Award at the 57th Locarno International Film Festival.

Forgiveness received International Festival and Audience Choice Awards and has featured in programmes on conflict, drama and reconciliation at festivals around the world, as well as on programmes at Cambridge and Princeton Universities. The movie dealt with the effects of apartheid and the difficulty of reconciliation and forgiveness in post-apartheid South Africa.

“The inspiration, the work and the reward all live on the same holy ground that you’re meant to get to as a director – it takes focus to get there and stay in that place with the growing amount of distraction that can pull one away from the core values that one’s meant to be looking for, to do honest work as an actor or a director.”

Internationally recognised as a top performance director with exceptional visual flare across all genres of filmmaking, Gabriel’s approach to filmmaking and storytelling has earned him a reputation for creating distinctive, compelling narratives. It has also turned many of his commercials into beautifully crafted short films in their own right.

“We need to figure out how best to make the industry grow so that we’ll all be proud of what the industry gives back to us and contributes to the day-to-day lifestyle of our pretty fragile South African community,” he explains. “There’s a lot of obsessing about what we can gain from this job or that choice and not much focus on how life or our industry is getting better, or what’s to be done about that. Thich Nath Hanh says: ‘no mud, no lotus’. Getting our hands dirty in practical ways to grow the lotus in our community is not a bad idea. We had the dark mud of apartheid once,” he says, referring to the Vietnamese Zen Buddhist monk and peace activist.

“People who had vision, not just in politics but in our business too, recognised that mud and did something about it – that vision caused the lotus to grow in those days. We’ve got new mud these days, and only a few willing to recognise, and dip their hands in. For most it’s all a pretty blinkered celebration of the status quo, just as it was during the bad old days of ‘braaivleis, sunshine and Chevrolet’. When we recognise the mud, and start to speak up about it, we’ll get to watch the lotus of the new generation grow.”

Shooting into the future

He has a couple of adventures in the pipeline, both very different projects with strong roots in true stories. One is a project called Concealment, written by Australian Terence Hammond. It’s a police thriller about a plot to assassinate the US senator, Bobby Kennedy, in 1966. It’s a kind of Bourne Legacy/ buddy cop thriller with a controversial American true story ingredient.

Gabriel is also developing a Wild West in Africa story about the roots of the Numbers Gang, called Blood Babylon. “Apart from that, I’m also keen to work on other people’s projects, and am always interested in looking at interesting material that promises strong performances. Meanwhile, I’m continuing to work in any form of authentic filmmaking that I can. It’s what I enjoy most.”