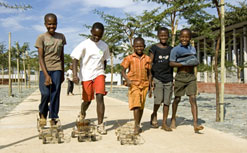 The latest FutureFact survey, conducted during June and July 2007, has revealed that most South Africans have a positive outlook on the future. In contrast to popular opinion – which holds that more and more South Africans are considering emigration, particularly to Australia – the survey found that most respondents believe there are opportunities for the taking in South Africa.

Fieldwork was conducted by African Response, a black-owned and managed research agency, and tapped into the opinions of a probability sample of 2 500 people aged 16 and over, from across the country. Communities of fewer than 500 people were exempt from the survey.

Respondents were asked to place themselves in one of four socio-economic classes – working/lower class, middle class, upper middle class and upper class – based on a number of factors such as the area where they live, the car they drive, the school their children attend, their position at work, and their role in the struggle for freedom.

Respondents were questioned on a wide variety of factors such as their personal attitude to life, their idea of what determines a person’s class, their opinion of infrastructure in the community, attitudes and behaviour with regard to HIV/Aids, being a South African and living in South Africa, activities and interests, trust in government and leaders, and others.

Better quality of life in SA

One of the major patterns of thought that emerged, according to researcher Jos Kuper, was that South Africans believe they have a better quality of life in this country than they would have elsewhere in the world. This was the opinion of 84% of lower/working class respondents and 90% of middle class and upper middle class respondents.

In contrast to previous FutureFact surveys, which found that many people, especially youth, wished to move from townships to the suburbs, the 2007 survey revealed a renewed sense of pride in township culture and an accompanying economic injection. Some 81% of respondents said they were more likely now to remain living in a township than a year ago, while 77% were happy where they were and 68% lived in the townships by choice.

With regard to the recent electricity outages across South Africa, most respondents felt prepared to support energy-saving initiatives such as compact fluorescent light bulbs, even though they were a more expensive investment initially. Forty-six percent believe that nuclear power is an unavoidable alternative, while 58% would be prepared to buy electricity from renewable energy sources.

Most people (88%) believed, with 51% of these expressing a strong belief, in the statement that “while the government has made a lot of mistakes, it has done more good things for our country”.

People also agreed that, while there could be no denying there was corruption in the present government, compared to the previous dispensation it was at least more transparent.

Only 46% said they would consider emigrating if they were dissatisfied with South Africa’s future leader. However, 60% of middle and upper class respondents said they were generally not interested in leaving, but 30% of the upper class and 19% of the middle class was giving it serious consideration, as was 17% of the working class.

Although the survey was conducted well before the recent xenophobia-related violence that rocked South Africa in May 2008, attitudes towards immigration of nationals from other African countries, especially troubled ones, already hinted at what was to come. Some 81% of respondents felt that South Africa should “severely limit immigration into the country from troubled African countries”.

The findings will be presented at the FutureFact conference 2008, which takes place at the end of July 2008 with the theme of South Africa: The 29th Day – Have we reached our tipping point? The conference is described as placing its focus on the changing social, political and economic attitudes of the people of South Africa, uncovering key trends that impact business and identifying where they are likely to tip in the future.

Among the keynote speakers are MediaClubSouthAfrica columnist Justice Malala, who is also GM of Avusa Magazines, and Azar Jammine, director and chief economist at economic consultancy Econometrix.

Established in 1998, FutureFact is an ongoing research project that uses the skills of researchers, planners, analysts and futurists to compile its data. The project aims to uncover what motivates, guides, inspires and transforms South Africans, and is used by a number of major South African companies such as mobile phone provider MTN, national electricity supplier Eskom and government departments to assist with strategising.

FutureFact surveys focus on key areas that affect South Africans such as unemployment, crime, HIV/Aids, lifestyle, media and others.