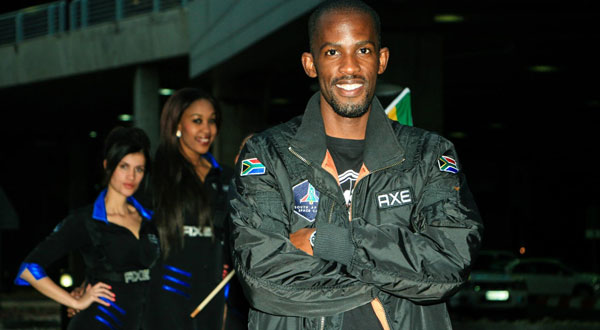 Like music to Mandla Maseko’s ears, this part-time DJ will blast off into space, literally. No-one in Maseko’s family has ever stepped outside South Africa, but now the 25-year-old is preparing to rocket into space in 2015. (Image: Mandla Maseko)

It is an extraordinary dream come true. Like music to Mandla Maseko’s ears, this part-time DJ will blast off into space, literally. No-one in Maseko’s family has ever stepped outside South Africa, but now the 25-year-old is preparing to rocket into space in 2015.

Maseko won the global Axe Apollo Space Academy competition for an hour long sub-orbital trip of 62 miles, or about 100 kilometres. Handpicked for the trip on the Lynx Mark II Spaceship, Maseko is one of only 23 civilians from around the world to win a seat on the space mission. He saw off a million other entrants to emerge victorious.

The son of a toolmaker and a cleaning supervisor, he hails from the dusty Mabopane Township near Pretoria. He will be the first black African, and the only other South African besides billionaire Mark Shuttleworth to have gone into space. Shuttleworth is a white entrepreneur and philanthropist who bought a seat on a Russian Soyuz capsule for £12-million and spent eight days on board the International Space Station in 2002.

“Excitement does not begin to describe how I feel right now,” Maseko told the Pretoria News daily. “If there was a better word than ‘excitement’ I would use it.” He was forced to put his civil engineering studies on hold because he could not pay the fees; now will get to experience zero gravity and a journey that normally comes with a $100 000 price tag.

He heard the news of his achievement on December 5, only a few hours after the death of Nelson Mandela. “I have run the race and completed the course, now here is the torch,” Maseko imagined Mandela would have said to him. “Continue running the race and here’s the title to go with it.”

In August 2013, Maseko was lying on the couch when he heard an advertisement for the competition on the radio and decided to enter, along with thousands of other South Africans. “I needed to send in a picture of myself jumping off something. I jumped off the wall in the backyard. I had to do it three times before I was happy with the picture.” His motivation for entering, he said was because he wanted “to defy the laws of gravity”.

Hopefuls from more than 105 countries competed for a spot on the shuttle. Only 30 entrants from South Africa were selected from a field of 85 000 determined individuals for the first set of challenges in Free State; they were cut down to three, who went to the US for further gruelling preparations. Maseko was among them – one black, one white, one of Indian origin. “We wanted to show South Africa is way past the colour of our skin. We are the human race.”

From December 1 to 8, Maseko and fellow South Africans Dean Roddan and Haroon Osman faced arduous challenges at the Kennedy Space Center in Orlando, Florida. This would test their resolve, strength and courage.

While at the Axe Apollo Space Academy, Maseko engaged in a series of missions that gave all recruits a taste of the thrills and trials faced by real astronauts. Among training missions, he learned to pilot an Air Combat USA aircraft and braced himself for the strength of blast off in a G-Force Simulator at the Kennedy Space Centre Visitor Complex.

Other challenges included skydiving, building and launching a rocket and conquering obstacle courses. “Unfortunately we could not get our rocket to launch, but we made up points because we were judged on bravery, enthusiasm and teamwork,” Maseko said. “We face things head on. I knew I had to learn, master and excel at the challenges, so I did.”

Buzz Aldrin, the second man to walk on the moon, was one of the competition’s judges, and Maseko got the opportunity to meet Aldrin when he was announced a winner. “I got to shake his hand three times. I was like, ‘Oh, is this you?’ He said, ‘Yes, it is me!'” For Maseko, the encounter was magical. “This is how it feels to be out in space,” he thought.

Aldrin is among 12 people – all American, all men and all white – to have walked on the moon. But Africa has growing space ambitions: the majority of the Square Kilometre Array, the world’s biggest and most powerful radio telescope, will be spread across South Africa and eight other countries on the continent.

He was a “typical ekasi [township] boy” who still lived at home with his parents and four siblings, said Maseko. His father, who grew up in such poverty that he got his first pair of shoes when he was 16, was determined that his children would never go hungry. “I don’t remember going to bed without having eaten,” he said. “My dad provided for us. He is my hero, and then Nelson Mandela comes after.

“I’m not trying to make this a race thing but us blacks grew up dreaming to a certain stage. You dreamed of being a policeman or a lawyer, but you knew you wouldn’t get as far as pilot or astronaut. Then I went to space camp and I thought, ‘I can actually be an astronaut.'”

But he had known since he was a boy that he was destined for greatness. “We were not brought up to believe we can be bigger than big, but I always knew I would be.” His mom, Ouma Maseko, agreed: “When I was pregnant with him in 1988, I knew I would give birth to a star,” she said.

The young Maseko’s imagination was fired by the science fiction series Star Trek and films such as Armageddon and Apollo 13. “I thought, that looks fun. No matter what life throws at you, you can use it and come out on top. If you get lemons, you must make lemon juice… My life has taken a total turn and this is my big break. People will be telling their children and grandchildren that I was the first black South African youth in space.”

Plans for the future

During the long wait before his trip, Maseko hopes to complete his civil engineering qualification. One day when he had money, he said, he wanted to pay for the education of a child from his area. This humble boy has been offered a gigantic launch pad and the ability to defy the laws of physical and political gravity. His long-term plans are to study aeronautical engineering and qualify as a space mission specialist with the ultimate dream of planting the South African flag on the moon.

“South Africa has come a long way. We have reached a stage where we are equal and we are one. [This] year is the 20th anniversary of democracy and what better way to celebrate than sending the first black South African into space?”

The idea of making history when South Africa celebrates 20 years of democracy, appeals to him. “The vision of all youths here in Mabopane is to drive a taxi, do drugs or work on houses. It’s good to be a solution to your township rather than a problem. I want to break that system and this is a nice way to go down in history. I believe that will motivate me. The sky is not the limit.”

Science and Technology Minister Derek Hanekom saw Maseko as a role model for “the future generation of space professionals and enthusiasts”. His experience could not have come at a better time than “when Africa is gearing up its space ambitions” as host to the world’s biggest and most powerful radio astronomy telescope, said Hanekom.

The director of that project, Bernie Fanaroff, also hailed Maseko as an ambassador for science. “Anything that raises the profile of science up there must be good because it brings to the attention of young people what they can achieve in science and engineering.”

It is a big responsibility, but the last word must go to the spaceman himself: “I have had to learn so much about astronomy and space to teach others. It’s been a dream, a lifetime dream come true, and I don’t want to stop here. When I come back, I want to become an astronaut and I will work hard to get there,” he said.