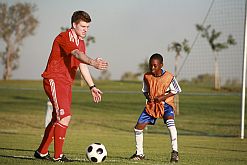 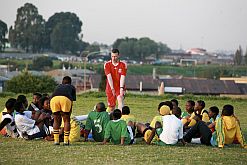 Excitement swept through football-loving communities in South Africa recently when members of UK’s well-known Liverpool FC stopped off at a few sports grounds to give coaching and wellness workshops.

The tour ran from 19 to 22 May and covered Gauteng and North West provinces. It was made possible through a partnership between Oxfam International and Fair Play for Africa.

“We want to spread our Truth 4 Youth messages,” said Liverpool head of community coach Bill Bygroves, referring to the team’s strategy of using football to teach youngsters how to lead responsible and healthy lives.

“The messages we use to teach are: show racism the red card, give bullying the boot, kick drugs into touch, shoot goals not guns, we is better than me, before you please think disease, health is wealth, knives are for eating not for fighting, more important than being a good footballer is being a good person, and you’ll never walk alone.”

Bygroves was joined by four other Liverpool coaches. Some of them, like Michael Yates, are also former players for the team. “I’ve played with some of the greats, such as Michael Owen and Steven Gerrard,” said Yates, who became a junior Liverpool player at age eight.

I was lucky enough to follow the UK delegation on its third and fourth day in South Africa, as it passed through Soweto and Randfontein, situated south and west of Johannesburg.

My first stop was Meadowlands Zone 5 in Soweto, where I saw boys and girls dashing to the nearby stadium after school on Friday afternoon. With football boots in hand, they practised their best moves along the way and, once at the grounds, quickly changed into their kit and started warming up. They were clearly keen to make a good impression as they waited for the Liverpool stars to arrive.

The Soweto Ladies Football Club was also there, eagerly anticipating the workshop. Coach Fikile Sithole gathered her team members and gave them a quick talk: “Remember to be disciplined. Take this opportunity to learn and share your skills and your experiences with Liverpool. They are here to learn from you as much as you are here today to learn from them.”

Sithole is a former captain of South Africa’s national women’s football squad, which is nicknamed Banyana Banyana, meaning “the girls”.

Her sporting career includes playing for Liverpool’s local development team at the tender age of 10, and playing for Swedish women’s club Oxaback Marc IF. But “I returned to South Africa to start rebuilding the Soweto ladies club, which was dying. There were only seven players left,” Sithole said.

With the help of fellow coach Colleen Hans, manager Oupa Thebe and public relations officer Thanda Dlamini, she has now grown it into a squad of 32 players.

Turning to her players, Sithole announced: “Liverpool is a few minutes away!” Shouts of joy and anticipation rung through the modest arena.

After introducing themselves to the Meadowlands group, the coaches split players into different categories. Yates took a group of 10 girls and taught them different techniques, like how to control and protect the ball while also looking out for opponents. The participants listened attentively and practised each move carefully after the demonstration.

“We are very honoured to have the team here – it’s a once-in-a-lifetime opportunity to be trained by great coaches,” said Khethiwe Mlangeni from the Soweto Ladies Football Club. “We’ve wanted such an opportunity for a long time, so were grabbing it with both hands.”

Yates said they were humbled by the overwhelming response from the players they worked with. “The children have been really enthusiastic and very receptive. Their skills are really good, and I was really impressed by the girl’s technical skills.”

At the end of the workshop the coaches gave a talk on healthy living and protection against HIV/Aids. They later thanked the Soweto locals for hosting them and being so enthusiastic during the training. All players got free footballs and T-shirts, while the best performers of the day received autographed posters and official Liverpool football jerseys.

The UK team took time between coaching clinics to visit disadvantaged communities hard hit by HIV/Aids. One of the stops was in Orange Farm, just outside Johannesburg. “Being there and seeing such poverty was really humbling,” Bygroves said.

In Orange Farm they also stopped at a hospice run by a woman called “Mama Rosy”, who cares for the terminally ill. “It was very moving and emotional to see how the community has pulled together to help give those who are sick the best care and comfort during their last days,” said Eddie Sullivan, Liverpool’s children’s coach.

Bygroves, who is also the teams’ chaplain, prayed with patients and their families at the hospice, and the others handed out team caps and T-shirts before saying goodbye.

“This is one of the memories I will take back with me, and it will stay with me forever,” said Yates.

“For the young people here, playing football is more than just a fun sport – it’s an escape to a place they can go to, to leave all their hardships behind. Football brings joy and hope to the young people here. I admire how these youngsters can still laugh and play with us so freely and just let go of their circumstances for a while.”

On Saturday the Liverpool team attended the Anti-Xenophobia Football Tournament at the Mohlakeng Stadium in Randfontein. This was held in recognition of the countrywide outbreak of xenophobic attacks in May 2008, which targeted migrants from Mozambique, Malawi, Zimbabwe and elsewhere in Africa. Sixty-two people died in the violence.

The Human Sciences Research Council later identified competition over scarce jobs and essential services, such as housing and healthcare, as the main cause of the attacks.

“We organised this tournament to unite the community and promote social cohesion,” said Amir Sheikh, the public relations officer for the African Diaspora Forum. “We want people to live together without fear, and we saw football as an effective way of driving that message forward.”

The Liverpool delegation was asked to guest-coach the eight teams involved, but they also had time to play against some of the youngsters there. “I found it difficult to play on this pitch, it’s quite bumpy,” said Yates. “The local boys played with such ease, though. That on its own is a testament to their technical skills”.

Hundreds of community members supported the tournament and cheered the English visitors on as they demonstrated their ball-handling tactics.

A taste of Africa

After the action on the pitch the coaches were treated to a spread of African cuisine and dancing by Rwandans, South Africans, Ghanaians, Zimbabweans, Nigerians, Mozambicans, Zambians and Ethiopians.

The dancers invited the guests to join in and taught them a few simple moves. The locals clapped and whistled at the sight of the English swinging their limbs and jumping to the beat of African drums.

After an elaborate African lunch, the Liverpool members listened and clapped along to a performance of local popular football songs and lively vuvuzela-trumpeting, and then taught the crowd some of their own war cries.

Soon one of the team’s best-known anthems, You’ll never walk alone, filled the stadium as locals joined the guests in song.