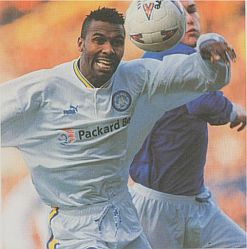 One of South Africa’s greatest sporting
ambassadors, Lucas Radebe won universal
respect both on and off the field for Leeds
United and Bafana Bafana.
(Image: Leedsfans.org.uk )

The life and career of football legend Lucas Radebe is one of South Africa’s greatest success stories.

Radebe’s journey from schoolboy goalie is all the more remarkable when one considers he’s played 70 times for the country’s national team, Bafana Bafana, captained two World Cup squads and been leading man for British football club Leeds United during some of their most triumphant seasons.

Born on 4 December 1969, Radebe grew up in Diepkloof, one of the toughest areas of Soweto.

At age 15, when township violence was at its most extreme, Radebe’s parents moved him to the rural, more protected Bophuthatswana, one of the “homelands” of the apartheid state.

To while away his time there he took to the football field, later joining the ICL Birds in the now-defunct Bophuthatswana Soccer League.

In 2003 Radebe married Feziwe, from Mafikeng in North West, and the couple had two children: Lucas Hugo and Owami.

His breakthrough came in 1989, when talent scouts spotted him and signed him up to play for one of South Africa’s top Premier Soccer League clubs, Kaizer Chiefs.

Three years later Radebe made his international debut for the country in a match against Cameroon and, in 1996, he was a member of the South African team that won the African Nations Cup.

Radebe soon became a champion defender for Leeds and was nicknamed “The Chief” or “Rhoo” by the club’s fans. In recognition of his outstanding leadership skills, he was appointed captain of the team for the 1998/99 season.

As captain of Leeds, Radebe was highly successful: in the 1998/1999 season, Leeds finished fourth in the FA Premier League, qualifying for the Uefa Cup.

During the 1999/2000 season, Leeds finished third in the English Premier League and qualified for the Uefa Champions League, reaching the semifinals. But in 2000 Radebe sustained knee and ankle injuries, which kept him out of the game for almost two years.

Radebe received the Fifa Fair Play Award in December 2000 for his contribution in ridding football of racism as well as for his work with children in South Africa.

He was voted 54th in the Top 100 Great South Africans in 2004 – a year before knee injuries forced him to retire from the game.

Radebe now serves as a roving ambassador for South Africa Tourism in the run-up to this year’s Confederations Cup and the Fifa 2010 World Cup.

But this football hero’s life has not been without hardship and tragedy. In October 2008 Feziwe died after a long battle with stomach cancer and two months later Radebe collapsed at gym, later being diagnosed with a heart condition.

In a moving tribute to his wife, a tearful Radebe said his wife was “not in a better place, she was in the best place”.

He said: “Times like these are not easy, and it is when you realise the value of life.”

Favourite of the fans

Leeds fans became so endeared to the “gentle giant” during his time with club that in 2008, when a local Leeds brewery asked for suggestions for a new beer name, the most popular suggestion was “Radebeer”.

Popular alternative rock band Kaiser Chiefs are said to have taken their name from Radebe’s old club as he had such an influence on them as children, with all the members being Leeds fans.

In a recent New York Times football blog Radebe talks about how he came to know the idol of every South African, Nelson Mandela, while playing for the British club.

“You know what, I was humbled, by his words, which of course I remember,” Radebe said. “When he arrived in Leeds, I had to welcome him to the city hall where we were all gathering.

“I remember him coming up to me, he didn’t know beforehand that I would be there,” Radebe recalled. “He just stopped and looked at me and he told everyone that I’m his hero. I had a big lump in my throat. I didn’t know what to say. He is such a great statesman and president. I’ve always looked up to him for inspiration. He made me feel so great, so honoured, but very humbled and really inspired.”

Focusing on next year’s World Cup, Radebe said: “Never, ever in my mind did I think we would host such a significant tournament. For us, it was really just a dream. Now we have a responsibility and I think we deserve it. It’s been a long time coming.We’re going to take it with both hands and make sure it is successful and different.

“I think it shows how much we’ve achieved through sport, how much sport really stands with us in uniting not only the country, not only the continent, but the world. This is a great opportunity to showcase our country and show what is possible.”